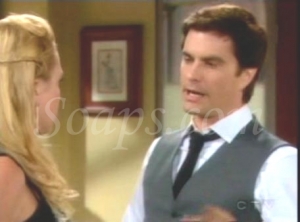 I really have nothing bad to say about the Stephanie storyline, and the office antics have been pretty good too. Let’s take a look at the week:

Change at ‘M’.
In this case, change is good. Swooning Aggie will get a run for her money from crafty Amber in the Nick sweepstakes. Add Whip’s warning into the dynamic and you have a decent storyline brewing. I’m not missing Bridget and the gang at all.

Brooke’s back.
What a great little scene when Ridge announced that Brooke was back at Forrester and Stephanie stunned them all by serenely accepting it. This made my viewing day!

Telling Taylor.
I’m not sure I liked the choice Brooke made in telling Stephanie’s secret to Taylor, but then again, it was a very typical Brooke move, and it was obvious how stressful keeping the secret was for her. I guess if you have to tell someone, tell a doctor who is bound to keep it confidential! What did you think about Brooke’s decision? Tell us by voting in Soaps.com’s The Bold And The Beautiful Snap Poll: Brooke’s Decision.

The younger set.
I have to say I'm losing interest in the Hope/Liam/Steffy/Oliver stuff lately. It seems so recycled and tired. Oliver sounds like a broken record, and Steffy is behaving predictably. Even injecting Bill into the mix isn't helping a whole lot. His dialogue has been a little cartoonish as he urges his son to 'man up' etc. I'm hoping there will be a twist of some sort here.

My sister's dying!
I was moved by Pam's reaction to the news of Stephanie's condition, but I have a bone to pick with the writers here - whatever happened to Pam and Stephen's story? It was just dropped. It would be interesting to see him figure in at this point.

Skid row.
Revisiting the homeless situation in Los Angeles as part of Stephanie's cancer story had me worried initially. I was feeling like it might not work, until Friday's episode, which was really moving and thought-provoking. I genuinely love that they chose to do this. Kudos. The Brooke/Stephanie declaration of love at the end of the week could have been unbelievable or slightly over-the-top, but it wasn't - it felt right.