Bridget/Owen/Jackie/Rick.
This whole scenario is a bit of a mess right now. Rick is behaving like an egotistical doofus right now by trying to seduce Jackie to clear the way for his sister - I'd much rather see him interacting with Amber - and Bridget's transformation into this beaming, adoring baby mama is more sort of annoying and unbelievable. Where are the postpartum blues, mood swings, and torn emotions? It would be far more believable to have her tearfully showing up at the Shady Marlin with the baby in tow trying to win Nick back, and then later crying on Owen's shoulder.

Missing in Action.
I'm a little confused at the continued absence of some characters on the canvas. We still haven't seen any fallout with Justin from his video tampering, we've never seen anymore about Marcus having feelings for Steffy, we hardly ever see Thorne, Donna, Aggie, Whip, Taylor, etc. The good news is that there are a lot of interesting new potential match-ups on the show. Tell us which pairing would get your attention by voting in Soaps.com's The Bold and the Beautiful Snap Poll: Best Potential Pairing. 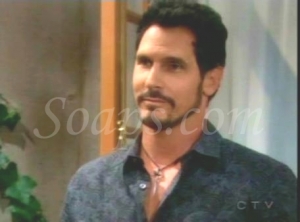 The Liam and Bill story made for good viewing this week on The Bold and the Beautiful. I’m not so enthralled with the Jackie/Owen/Bridget drama, perhaps because I’m just not as interested in those characters. Let’s break it down and see how it looked:

Six Figure Salary and a Corner Office!
I was a little taken aback by the suddenness of Bill’s change of heart where Liam is concerned, but impressed that the story is moving at such a good pace. This adds another layer to sexy Dollar Bill, and made me like Katie and Bill as a couple more too. I’ll be waiting to see if the story will remain as interesting now that Liam and Bill have made peace. In any case, it was a heart-warming payoff for the storyline this week!

No Hope for Oliver!
Poor Oliver, he can’t get his hairstyle or his love life in hand! I thought his response to Hope’s dumping him was a little underwhelming – he showed more emotion when he broke the news to Brooke and Ridge than he did with her. Anyway, leaves one to wonder if he’ll do the pining thing again, or maybe set his sights on someone else, such as Steffy!

Steffy versus Hope – Round Two.
Looks like ‘nothing worth having comes easy’ are Steffy’s words to live by, as she appears to be gearing up to compete with Hope for yet another young man’s attentions. Since Liam is positively google-eyed over Hope right now, it’s bound to be another uphill battle for our favorite schemer!

The Bold And The Beautiful Video Promo: Has He Kissed You Yet?

The Bold And The Beautiful Saturday Teaser Poll: Hospital Bound!