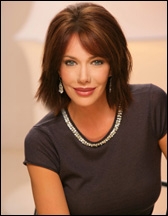 On Friday, October 26th, B&B‘s Hunter Tylo, along with Michael Tylo Sr., did one of the most difficult things any parent can imagine; they said their final goodbye to their son. It was reported that about 200 family members, friends and co-workers joined them as they laid to rest their 19 year-old son Mickey (Michael Jr.). The service was held at Forest Lawn Memorial Parks Church of the Hills in California.

Mickey Tylo passed away on October 18th in what was classed as an accidental death. After venturing outside to use his cell phone at the family home near Las Vegas, he suffered a seizure and fell into the swimming pool. Michael Jr. then drowned before being discovered by older sibling Christopher.

While Christopher shed tears at the memorial on Friday, Hunter spoke about her son, “He liked to make me laugh,” she reportedly said, “He had a beautiful spirit…I thank God for giving me those 19 years.” Michael Tylo Sr. also spoke.

The Bold and the Beautiful set was closed down for the day, as plenty of the cast and crew attended the memorial service. Bradley Bell came to lend his support, as did Susan Flannery, John McCook, Jennifer Gareis, and Katherine Kelly Lang.

Soaps.com extends sincere hope to Hunter (and Michael) at this most difficult and sorrowful time, that they may find the strength and support they need to move forward after this tragic experience. We know they will always carry Michael Jr. in their hearts and memories.