Deluded.
It would appear that Jackie is deluding herself in more ways than one. It's not going to be a walk in the park for her, Bridget, Owen and the child, especially with Jackie creepily referring to Logan as her baby! What's up with that? I'm not sure which way this storyline will go yet, but Bridget wants Owen, Owen will likely get sucked in, and Jackie may end up having to turn to someone else and, worse, listen to Nicky tell her, "I told you so." Rick's flirtation was pretty transparent on Thursday, but it got me to thinking, if Jackie and Owen's relationship falls apart, who should she fall for next? Vote in Soaps.com's Jackie Snap Poll!

Gathering Giggle.
I loved the unlikely gathering that came together at Jackie and Owen's place to see the baby. The snarky looks, innuendo, and stolen moments (read Donna and Eric), were very entertaining. Well done!

Cutie Patooties!
I'm nuts about Liam and Hope! They're so cute together! Since I also like her with Oliver, this storyline may have some potential! 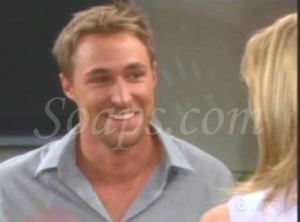 Well, it was a short week, and not a bad one for The Bold and the Beautiful. There were lots of entertaining scenes, particularly when everyone came together to see the new baby. Here are my rants for this week:

Arctic Bill.
I’ve rarely seen a character behave so coldly as Bill has toward Liam this week! It’s a bit much. We got a glimpse of the reason for it on Thursday’s episode, but even so it’s hard to comprehend how someone could be so harsh on a young man who had recently lost his mother – makes you feel like Katie is nuts to stand by Bill! With that said, Katie had a few lines that made me laugh out loud this week, such as this understatement, “Bill just takes a while to warm up to people.” Too funny!

The Miracle of Birth.
Don’t get me wrong, I have no issues with the actors playing Bridget and Owen, but the lines they were saying at the cabin after the baby’s birth made me want to hurl! I could not wait for their scenes to end! It was all just so over-the-top, gushy, and so not realistic – people don’t talk like that! Thankfully, they seemed to settle down once they arrived back at home. Phew.

Baby Blues – Not!
No blues for Bridget – she’s beaming from ear-to-ear, full of plans to be a family with Jackie’s husband! It’s not enough that she slept with him?

The Bold And The Beautiful Video Promo: Oh Dear Lord!