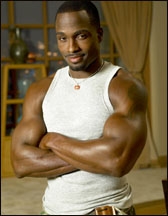 B&B just got much more interesting ladies! Soaps.com is thrilled to announce that Mykel Shannon Jenkins (ex-Officer Murphy, GH) has been signed to the contract role of Lt. Baker’s son, Charlie Baker, who has just made detective rank in the police department. Detective Baker comes into storyline as part of the after-story involving Eric’s re-purchase of Forrester Creations, and will be an important player in the ‘hottest and most suspenseful story arc of the year’! Mykel will begin taping this week, on October 23, 2007, and his character will first appear on November 21, 2007.

Hottie husband to Tracey and doting dad to a seven year-old son, Mykel was born in Biloxi, Mississippi, but after traveling around the United States due to his father’s position as an officer in the USAF, the family settled in New Orleans, Louisiana. Not just a pretty face, Mykel graduated with a degree from Loyola University before making a name for himself in his hometown as an on-air personality hosting New Orleans’ WB38 Kids Club.

In 2003, Mykel made the move to Hollywood and began auditioning and taking roles in various movies and television shows. In 2004, he landed a 13 week gig on ABC ‘s General Hospital as Officer Murphy.

How does he stay so hot? Well, he’s also a certified personal trainer! Mykel, a faithful Christian, also incorporates spiritual and mental well-being into the physicality of training others.

Soaps.com is so happy to welcome Mykel to The Bold and the Beautiful cast, and we know readers will be thrilled with this exciting newcomer! Soaps.com wishes Mykel well in his first days on the B&B set, and readers, keep watching the News Room for more on Detective Charlie Baker! Oh, and you will love Mykels’s Website!