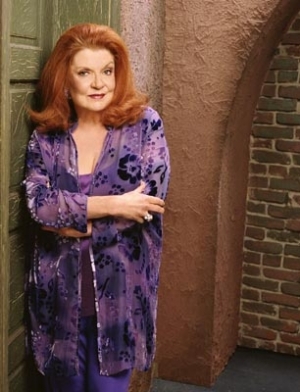 As previously reported in Soaps.com’s B&B News Room, Ronn Moss (Ridge Forrester) will be making an appearance on John Edward’s Crossing Over on Saturday, October 27th. Of course, we knew that Ronn might be reaching out to someone on the other side, but we were stunned to hear that during the taping, Ronn encountered none other than the late Darlene Conley (Sally Spectra)! Apparently, Ronn will tell of his dash to Darlene’s side just moments before her passing, and then learns that Sally (who has not died on screen) will be making an appearance on B&B in order to launch a major storyline!

We’re sure that Bradley Bell has had a hand in this somewhere, as he has confirmed to TV Guide’s Michael Logan that the character of Sally Spectra will indeed pop-up in a flashback on November 1st as a means of initiating a plot twist!

Soaps.com readers who have expressed their longing to see the character of Sally addressed on-air will be pleased with the news that she has not been forgotten! Soaps.com is eagerly anticipating both the airing of Ronn’s appearance on John Edward’s Crossing Over and the mysterious flashback scene on The Bold and the Beautiful! Don’t forget to tune in!