Come Into My Bedroom.
Possibly the only person Brooke may not ever want to see in her bedroom is her mother-in-law, but lo and behold, there Stephanie was with the latest news on the video tampering! Cracked me up!

I'm a Man, Not a Cocker Spaniel.
Well, I'm not sure what to make of this new angle with Jackie taking Owen for granted. It seems like too obvious a move to open the door to Owen getting together with Bridget. Since I dislike too-obvious plots, I'm not loving this. However, the photo shoots this week were amusing, and the scenes at Jackie's place on Friday were entertaining in spots as well, even if Jackie was too over-the-top in her behavior. Soaps.com wants to know if you think Owen is in the right relationship. Let us know by voting in the Woe is Owen Snap Poll!

Best New Addition!
That's Scott Clifton as Liam, of course. I had a feeling that he would be a breath of fresh air on this soap and he has been. I love his flirtation with Hope, his hapless interactions with people, and his comic timing. Can't wait to see more! For the record, my guess is his father is Thorne, or more likely, Bill. 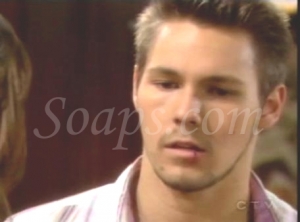 Credit: Not a dog! (Soaps.com)

It was a good week for The Bold and the Beautiful on the whole. We’re moving on from the repetitive conversations surrounding Brooke and Oliver’s scandal, and there were some good comic moments this week to up the entertainment factor. Check out my thoughts below:

Billion Dollar Bill.
After watching Bill charm Donna last week, and emerge from the video tampering scandal unscathed this week, I have to say I like this guy more every day. Not only does he ooze sex appeal, but he doesn’t flinch in the face of adversity or foes. He may be a tad too cocky, but since he shares chemistry with even the drapery, I’ve elected to overlook that. It’s no wonder his wife is all over him like a cheap suit – who can blame her!

He Wants Oliver Love.
You have to give Oliver kudos. He’s not only incredibly good-looking, but romantic and sincere to boot. Good thing Hope finally decided to forgive him, because I wouldn’t have been able to blame Steffy for snapping him up – a keeper! Oh, and how funny was the scene where he’s stringing up lanterns outside the Forrester Mansion as Stephanie’s patting herself on the back for the fabulous security on the property! Think again!

Are You Sharing?
Speaking of humorous, Amber really brought me a giggle this week at the photo shoot when she asked Bridget if she and Jackie were sharing Owen! Bridget’s reaction was priceless!

The Bold And The Beautiful Video Promo: You Are Crazy!