Powerful Aphrodisiac.
Boy, Katie sure gets turned on by Bill's power plays! I'm not sure this is the Katie I remember when I was last watching the show, but they do make a sexy couple, so I'm not necessarily complaining. Some viewers also like Bill's chemistry with Steffy, and we were treated to some scenes with this pair over the past few days too. We want to know if you would like to see Steffy with Bill, or with someone else. Let us know by voting in Soaps.com's Steffy's Man Snap Poll!

Hopeless.
I'm over everyone pleading with Hope to do one thing or another. These conversations become repetitive and uninteresting rapidly. Hope needs to decide who she's going to associate with, and who she's not, and move forward.

Slap Happy Part II.
How hilarious was it watching Stephanie have a go at poor, cowering Liam! Such funny scenes!

Shocker!
Who didn't gasp when Liam shouted at Ridge not to hit him because he's his son? Only B&B would deliver this stunning tidbit in this way! Well done - can't wait to learn more! 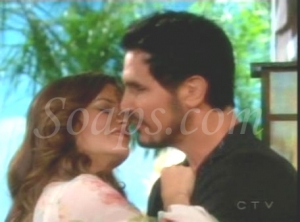 Well, it was a slap happy week around Stephanie’s house on The Bold and the Beautiful! She gave us some very entertaining scenes to enjoy, and the surprise at the end of the week was one of the things B&B does really well – shock and awe! Here are a few observations:

The Cougar Family.
I really wasn’t feeling the Owen, Bridget, Jackie thing this week. Jackie and Owen both kneeling in front of Bridget to feel the baby kick, followed by all of them waxing eloquent about what a purrfect family they’ll make is just weirding me out at this point. Bridget watching enviously as Owen kisses Jackie means she’ll want him for herself, so it has a predictable feel as well. Hopefully there will be some unexpected twists in this tail, er, tale.

Slap Happy Part I.
Stephanie was just waiting for a chance to belt Brooke and she finally got it! I love their confrontations – they never disappoint. While I don’t necessarily agree with Stephanie inserting herself between mother and daughter, it sure makes for good television!

Taylor Made Sense.
Once again, the writers made better use of the Taylor character this week as she participated constructively in what was going on, rather than being a sidekick or an observer. Kudos!

Donna’s Dilemma.
It really wasn’t much of a dilemma once she saw those dollar signs! I like the fact that she sold to Bill because it will lead to some great conflict at Forrester, but I also understand why Brooke was upset about it.

The Bold And The Beautiful Video Promo: Liam's Encounters!

The Bold And The Beautiful Saturday Teaser Poll: Who Shares a Kiss?

Gwyneth Paltrow Reveals What She Thinks Of Kourtney Kardashian’s ‘Poosh’ Vs. ‘Goop’