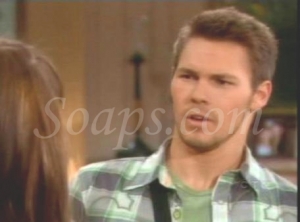 This week on The Bold and the Beautiful, the Brooke and Oliver scandal took center stage and provided plenty of drama! All in all, I was quite entertained. It might have been nice to see a little more of Nick and Aggie after what transpired last week, or even Jackie reacting to the Forrester scandal. Here are some thoughts on the past five episodes:

Give Me Space.
I find it difficult to sit through scenes with Owen and Bridget sometimes. I have a sense of being uncomfortable with their close proximity, and always end up feeling like Owen is slightly one-dimensional. I did like the way Bridget dealt with Hope, and with Brooke, in terms of the scandal – the realism was appreciated.

Think It Through.
Back when I first began watching B&B again, I got a slightly negative impression of Justin, seeing him drooling over Donna mere minutes after she split from Eric. This week, seeing him tamper with Steffy’s presentation made me think he is also a bit of a doofus. Why would a supposedly intelligent man (a) make a Logan scandal public without consulting his boss who is married to a Logan, and (b) let said actions be fully witnessed by a nervous intern – a bit risky if you ask me! Unfortunately for Bill, deciding to keep this a secret will make him look guilty as sin when Katie finds out – and you know she will! Justin’s future with Donna won’t be looking too bright either. As for Liam, he’s the weak link in all this – if Steffy decides to climb into his lap like she did with Oliver, methinks he’ll sing like a bird!

Confrontations Everywhere!
The confrontations were something to behold this week on B&B! There was one smackdown after the other - and all were delicious to watch! Of course, Brooke and Stephanie facing-off is always fabulously intense, and Brooke and Hope going at it was really emotional - Kimberly Matula (Hope) held her own in scenes with Katherine Kelly Lang (Brooke)! Additionally, it was refreshing to see Ridge maintain his position on the matter - he's usually so easily swayed. It's been great acting all around, which makes the somewhat ridiculous storyline excusable - good stuff! Let us know what you think of the confrontations this week by voting in Soaps.com's Favorite Confrontations Snap Poll!

Raised By Wolves...Or Stephanie?
I love when Stephanie and Brooke are in full drama/battle mode, and you need reasons for that to happen, but I take issue with Stephanie being so careless with Hope's feelings in her zeal to nail Brooke. Even if Stephanie actually believes Brooke seduced Oliver on purpose, it's over the top for Stephanie to ruthlessly state that to Hope. Stephanie tends to get carried away by her own hatred. That said, it's no surprise that she wound up on the floor at the end of Friday's episode! Whoops!

Jason Castro's Appearance.
What a cutie! His drop-in at B&B was a nice distraction from the heavy drama. He didn't do a lot of acting (being that he was playing himself), but he really came across naturally onscreen. Jason just gave off a cool, positive vibe. Nice!