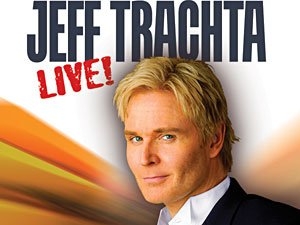 A success in Italy! (CBS)

Every rose has it’s Thorne, (Forrester, that is!) This is a tale of the continued success of two former Thornes…

Soaps.com did a little digging and was able to uncover the whereabouts of the two actors that held the role of Thorne Forrester before Winsor Harmon on B&B!

The last ‘Thorne’ before Winsor took over the role, was the beloved Jeff Trachta. Soaps.com was happy to discover that Jeff is enjoying success with his one-man show, Jeff Trachta Live, in Las Vegas! Trachta is currently performing at Harrah’s Rio All-Suites & Casino. As a critically-acclaimed performer, Jeff is able to pull in the crowds with his entertaining routine, which combines song, dance and comedic impressions! Little-known fact: Jeff Trachta can do over 50 different impressions of famous television personalities from programs like Gilligan’s Island, SouthPark, Bewitched, and even SpongeBob Squarepants! Imagine, Soaps.com readers, Jeff doing Larry the Cable Guy! Or Richard Nixon!

However, the impressions stop when the singing begins. The Bold and the Beautiful fans are well-aware of Jeff’s amazing vocal abilities. His recording career took off during his time on B&B when his debut album with Bobbie Eakes (ex-Macy), Bold and Beautiful Duets, topped European charts within a month of it’s release. ‘Duets’ was the first of three, triple platinum-selling albums for Trachta! His impressive vocal range allows him to masterfully perform songs from Elvis to Billy Joel to The Backstreet Boys! Jeff’s Las Vegas show received rave reviews from the L.A. Times; “Whether doing one of his spot-on impressions, or singing a heartfelt ballad, he is superb. Trachta has…vocal versatility…!” For tickets, more information, or to see pictures from Jeff’s performances, visit http://www.jefftrachtalive.com. Makes us wish we were Las Vegas-bound!

Soaps.com found another tidbit of trivia about Jeff Trachta – did you know that he was in the race to replace Bob Barker on the Price is Right! That hosting gig ultimately went to Drew Carey, but that’s because Soaps.com readers didn’t get a vote!

Before Winsor and Jeff there was Clayton Norcross. The Bold and the Beautiful's original Thorne Forrester seems to have capitalized on the great popularity that B&B enjoys in Italy. Clayton is now appearing as Galeno in Pompeii, ieri, oggi, domaini - a mini-series produced for Italian television! Shot in Bulgaria, the mini-series co-stars another ex-The Bold and the Beautiful star, Victor Alfieri(ex-Giovanni).

Soaps.com congratulates both Jeff Trachta and Clayton Norcross on their continued success in the world of entertainment!

Former B&B Stars: Where Are They...