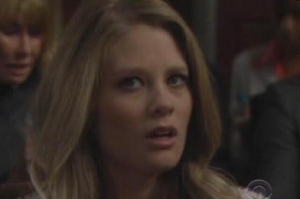 What Will Happen Next? (Soaps.com)

Brooke and Oliver’s tryst dominated The Bold and the Beautiful this week. Most of the week was dedicated to how Ridge handled his wife and daughter. While I found Ridge’s behavior to be confusing this week, there were still some other interesting moments. Here’s the rundown of noteworthy and cringe-worthy moments of the week:

Ridge Makes Me Cringe.
Ridge continued to do what he deemed best for all, and he forgave his wife and punished Steffy. While I found it a nice twist that he forgave Brooke so quickly, I was surprised that he came down so hard on Steffy. Yes, Brooke didn’t set out to cheat on Ridge. However, not to be too graphic, but you would think Ridge’s enormous ego would have been bruised because Brooke didn’t recognize his manhood! Instead, Ridge ordered Steffy to welcome Brooke back to Forrester with a video tribute. I have to wonder why Eric, Stephanie, Thorne and other board members weren’t involved in this decision. Also, Ridge was even harder on Oliver, and made the comment that it was disgusting that Ollie would have unprotected sex with Hope against a wall. He makes a good point, but I’m hoping that his comment wasn’t foreshadowing of another surprise pregnancy!

Sugar and Spice Sisters.
I really liked Steffy this week. I thought her scenes with Ridge were honest. It can’t be easy for her to watch Ridge constantly forgive Brooke. I was really surprised but found it refreshing that she came around so quickly. I wish she wouldn’t be so hostile with Hope, as Hope can’t be blamed for her mom’s behavior. Speaking of Hope, I’m wondering who she will turn to for guidance now that the scandal is out. Will she be like Steffy’s namesake, Stephanie, or perhaps seek out Taylor the doc for advice? Maybe some of Hope’s real dad’s genes will come out and she will be less sugary and more spicy like her sister, Steffy. What do you think Hope will do? Be sure to vote in the poll, Who Will Hope Turn To?

Something Old, Something New.
It didn’t take Amber long to meet up with her former husband, Rick. The two are obviously still very attracted to one another, as they had a very flirtatious reunion that ended with a kiss. I don’t know that it’s a good idea to reunite these two, as we’ve been there and seen that train wreck. I’d like to see Amber mix it up with someone else. Perhaps if Jackie and Owen imploded, she and Bridget could both go after him! Sometimes the drama is more exciting to watch!

Let’s Get It On.
I wasn’t a big fan of Aggie in the beginning, but I have to admit, I really enjoyed her scenes with Nick this week. They had a sweet and fun date and were open and honest with one another. Aggie told Nick he wouldn’t be celibate for long and she was right! She sadly said she didn’t know if she could be with a man again and Nick responded with a sweet, then passionate kiss. Then the two hit the sheets. Good for Aggie! However, I don’t think Bridget is quite out of the picture yet. It’s a little too soon for Aggie to sail off into the sunset with Captain Marone.

First Day Job Jitters.
It didn’t take long for someone else to uncover Brooke and Ollie’s tryst, and we were introduced to Liam this week. Talk about a first day on the job! Justin decided to use this information and expose them in the worst way possible. I’m still not sure how this is going to benefit Spencer Communications. However, I am excited to see a new character on the canvas and look forward to seeing who Liam mingles with!

Fallout.
Just when Steffy turned over a new leaf and made a nice video for Brooke, it was tampered with and the scandal was out for the world to see. Over the next few weeks, we’ll see the fallout from this. I’m hoping that Steffy isn’t blamed, which could further set her back. There are so many players in this story now, so the next few weeks should be interesting!