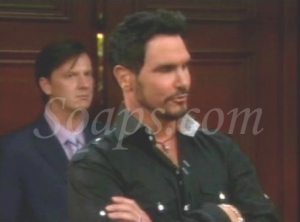 Let's do the twist! (Soaps.com)

Well, it was a good week for The Bold and the Beautiful viewers cheering for the underdog Logans, but not so much for those championing the powerful Forrester clan! I found plenty of dramatic moments to enjoy, but still became frustrated about scenes which should be two minutes dragging out over an entire episode or more. Some points I pondered:

Bold Bill.
Maybe it’s just because I find him sexy, but I thoroughly enjoyed watching Bill stick it to Stephanie. I’m not a fan of him taking over Forrester (why bother?), but he does make a formidable opponent to play opposite powerhouse, Susan Flannery (Stephanie) – which makes for good viewing! Who do you like to watch Stephanie go up against? Let Soaps.com know by voting in the Stephanie’s Foes Snap Poll!

Jailhouse Rock.
I’m still loving Pam and Stephen. Pam is so much more interesting as a character caught between her lover and her sister, and it can only get better if Stephen is going to team up with Bill. Thumbs up!

Nick’s Announcement.
This was very entertaining. I love how Jack Wagner (Nick) plays crusty and sarcastic. The looks on the faces of everyone assembled as he blurted out that the abdominal showman was Bridget’s baby daddy were priceless. Don’t ask me why more people aren’t reminding him that he put Bridget through the same scenario – guess it’s a male double-standard thing. The only part that irritated me was Amber’s airhead remark. Amber grew up a lot over on Y&R and I hope the writers at B&B don’t ignore that!

Helpless Hope.
I felt like she was a little too easily swayed to go to school in Boston. I would like to see her be a bit stronger and not be such a wide-eyed innocent. I suppose if the secret comes out she will harden in a hurry.

Logan-Free Zone.
But for how long? Steffy's little celebration is set to come to an abrupt halt, methinks. I like Steffy because she's feisty, but she was doing too much gloating - a comeuppance will definitely be worth watching. Bring it!

Let's Do the Twist.
I love that Ridge forgave Brooke when she told the truth because it was such a great switch from the usual predictable outcome. I truly appreciate it when writers surprise me with a twist. It goes without saying that it's quite unbelievable for him to be so understanding over such a shocking thing, though! As for what comes next, I'm certain Ridge will go caveman on someone over this - Oliver perhaps?