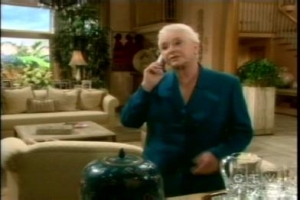 Soaps.com is happy to report that we’ve spoken with one of our friends over at the show and have found that the notably absent Susan Flannery will be reporting back to The Bold and the Beautiful set this week to resume taping! The Emmy award-winning actress has been greatly missed as the storyline involving Brooke’s attack has come to a pinnacle.

Soaps.com and it’s readers have felt concern recently because the New York-born actress was said to be ill. A source at The Bold and the Beautiful has told us that Susan was indeed ‘under the weather’ prior to their summer hiatus, and then on top of that, had some already scheduled vacation time requested that extended her hiatus.

Soaps.com readers have missed the character of Stephanie rather acutely of late, because she is due to face up to her nemesis, Brooke, in a current storyline. Brad Bell had to 'tweak' the story to allow for Susan's time off, but B&B's fans can expect to see an eventual culmination in this storyline.

Our source at The Bold and the Beautiful also revealed that Stephanie will first appear in scenes again beginning October 19th! Mark your calendars!

Glad to hear you're healthy and will be back soon, Susan!