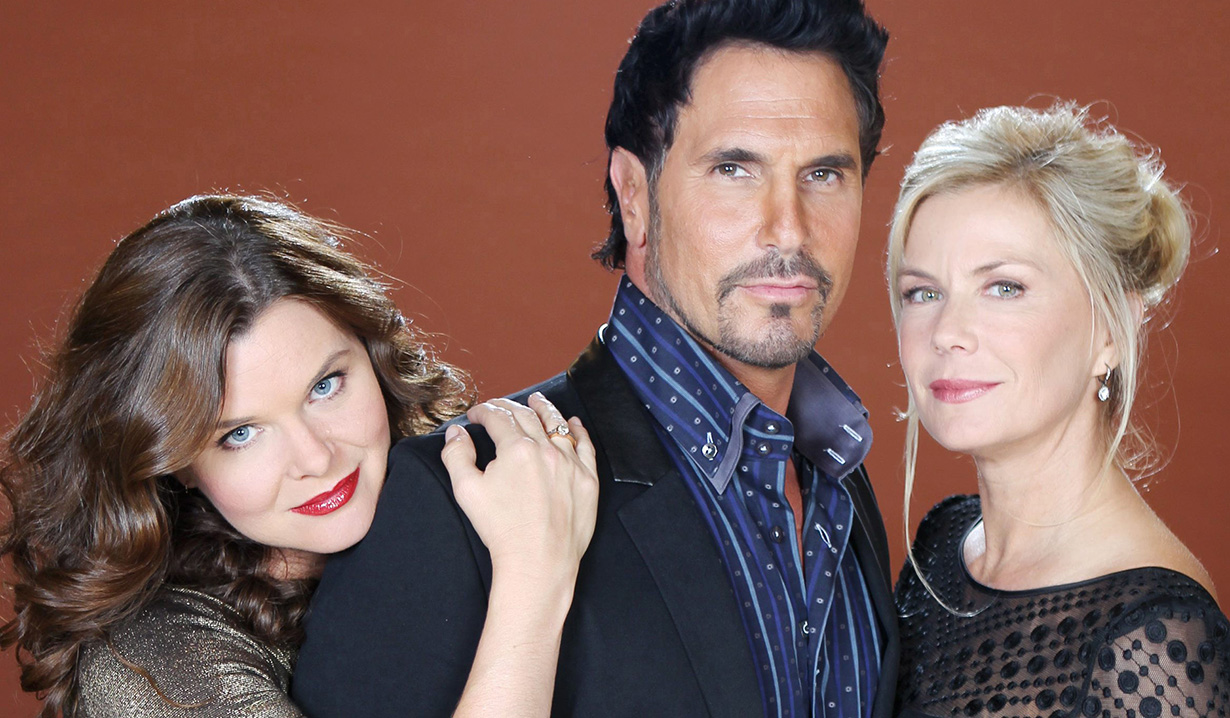 Ridge Forrester (Thorsten Kaye) confided in his ex-wife, Brooke Logan (Katherine Kelly Lang), that he had a vasectomy, unbeknownst to his wife, the much-younger Caroline Spencer (Linsey Godfrey), who wanted his baby. Brooke, meanwhile, had taken on a position at Spencer Publications, which put her in close proximity to the man she’d decided was the love of her life, Bill Spencer (Don Diamont). Bill was married to her sister, Katie Logan Spencer (Heather Tom), who overheard Brooke declare her feelings and started hitting the bottle. By this time, Brooke had invited her son, Rick Forrester (Jacob Young), his wife, Maya Avant Forrester (Karla Mosley), and her sister, Nicole Avant (Reign Edwards), to move into her home after they left the Forrester mansion. The Avants had weathered Maya and Nicole’s father, Julius Avant’s (Obba Babatunde) hateful outburst over Maya being transgender at Rick and Maya’s wedding, and his objections to Nicole becoming pregnant with her and Rick’s child as their surrogate. 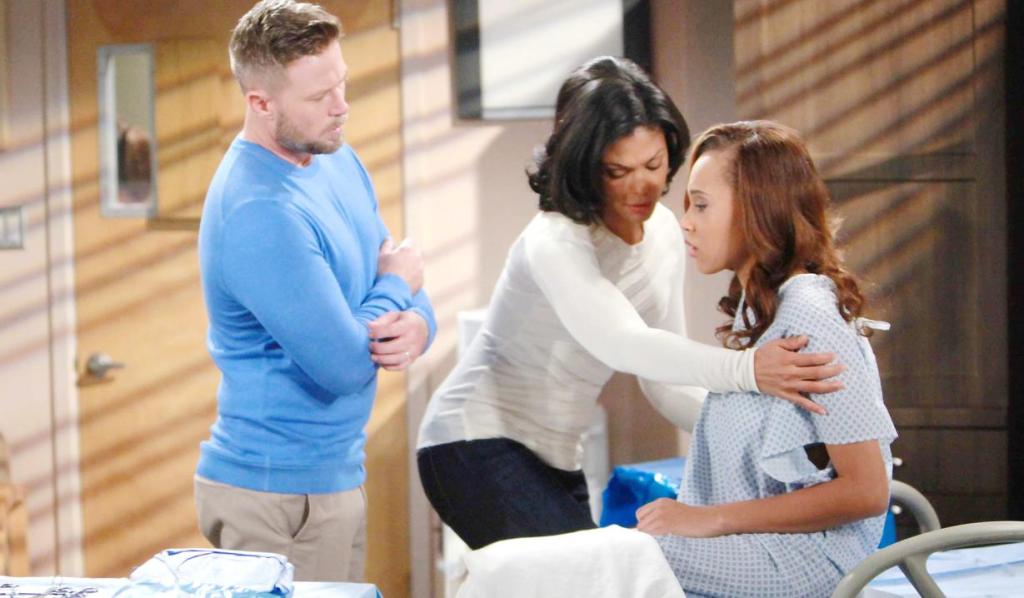 Nicole’s relationship with Zende Forrester (Rome Flynn) also suffered due to her decision to carry the baby, and her best friend, Sasha Thompson (Felisha Cooper), took full advantage. Later, it was revealed that Sasha was actually Maya and Nicole’s sister from an affair Julius had with her mother, the Avants’ neighbor. Brooke confided in Rick and Maya about her situation with Katie and Bill, and told Rick that Ridge, whose wife Caroline was now pregnant, had had a vasectomy. The baby, Douglas, was born and Ridge and Caroline realized the father was his son, Thomas Forrester (Pierson Fode), who had sex with Caroline in a hotel when she was angry with Ridge. Thomas believed she consented, but she was on meds and drinking wine. Ridge and Caroline elected to pass the child off as Ridge’s, but Katie figured it out. When Bill betrayed her confidence, Katie told him to go be with Brooke. Bill and Brooke made love, but Brooke resisted carrying on an affair. When the truth came out about Thomas being Douglas’ father, Ridge left Caroline, and turned his focus to stopping Quinn Fuller’s (Rena Sofer) relationship with his father, Eric Forrester (John McCook). Quinn had left her ex, Deacon Sharpe (Sean Kanan), for dead, and kidnapped a concussed Liam Spencer (Scott Clifton), holding him captive in a remote cabin and convincing him they were married. As a result, Liam lost Steffy Forrester to his brother, Wyatt Spencer (Darin Brooks), as she assumed he had gone to Australia with Ivy Forrester (Ashleigh Brewer). Quinn took up with Eric, and Ridge planned to prove she wasn’t trustworthy by seducing her. Brooke was on Ridge’s side, and finally agreed to marry Bill, which would also help Ridge by giving her Bill’s 12.5% of Forrester shares. Brooke and Ridge’s son, RJ Forrester (Anthony Turpel), came home from school, and objected to the engagement, however, and ultimately helped Ridge win Brooke back from Spencer. The family supported Eric through his recovery from a brain hemorrhage, but refused to show up for his wedding to Quinn. In the meantime, Steffy and Wyatt had divorced, and she had reconciled with Liam. A plan was set for them to be married in a double wedding with Brooke and Ridge in Australia. Thomas, who had dated Sasha and briefly tried to make a go of it with Caroline and Douglas in New York, returned and met the legendary Sally Spectra’s niece, also named Sally Spectra (Courtney Hope), who was trying to relaunch her aunt’s former fashion house. Thomas was amused when Sally snuck into Zende and Nicole’s wedding at the Forrester mansion dressed as a caterer, and comforted the redhead when her line received terrible reviews. It turned out she was being deliberately sabotaged by Bill, who wanted to raze her building to put up a new skyscraper. Thomas and Sally further bonded when he invited her to Steffy and Liam’s wedding in Australia. While Steffy ziplined in for her ceremony with Liam, Brooke called off her wedding to Ridge after catching him sharing a ‘goodbye’ kiss with Quinn as they agreed to put an end to their ongoing attraction. Brooke didn’t tell Eric, not wanting to break his heart, and Bill showed up to make her feel better. Brooke arrived back in Los Angeles and was stunned to learn Sheila Carter (Kimberlin Brown) was back on the scene, causing problems for Eric and Quinn, who had to deal with the supposedly reformed Carter’s plots to try and win Eric back. Though he moved out for a time, Sheila was ultimately unsuccessful, and Eric stayed with Quinn. Meanwhile, Brooke proposed to Bill, and this time, she married him. 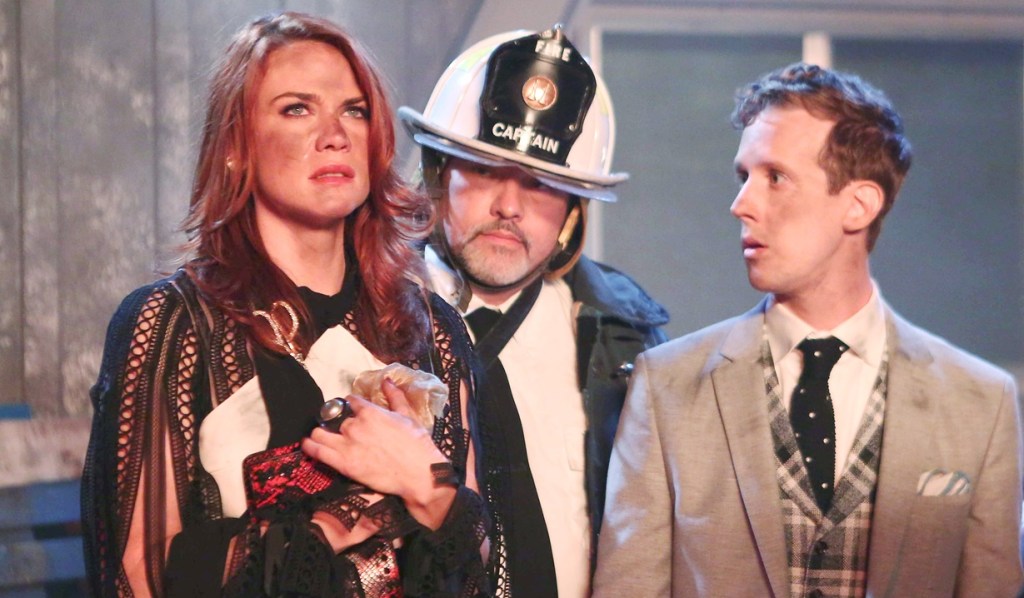 Bill had stepped up his efforts to get Sally out of the Spectra building, even going to the extremes of having a fire set in the building and lying to Thomas that Caroline was dying. Thomas left Sally and went to be with Caroline in New York. Liam learned of his father’s machinations and wound up trapped with Sally in the rubble of the Spectra building when Bill commenced with the demolition. Bill and Steffy saved the duo, but not before Liam had shared a kiss with Sally, who was falling for him. Upon learning that Bill had deliberately started a fire in the Spectra building, and had punched Liam when he confronted him, Brooke left Bill and their marriage was annulled. She soon turned to Ridge again, a move applauded by both Rick and RJ, who was dating Sally’s sister, Coco Spectra (Courtney Grosbeck). Steffy tried to help Liam and Bill reconcile afterward, but ended up having sex with Bill, when he comforted her after she found out Liam and Sally had kissed. An emotional Steffy recommitted to Liam, and the couple was thrilled to later discover that she was pregnant. However, when Liam saw a DNA test Steffy had taken to ensure the baby wasn’t Bill’s, he left her. During this same time, Thorne Forrester (Ingo Rademacher) had returned home from Paris, and tried unsuccessfully to dissuade Brooke from remarrying Ridge, but ended up supporting the wedding, which was held at the Forrester mansion under Stephanie Forrester’s (Susan Flannery) portrait, which had been hung up just for the occasion. Thorne turned his eye to Katie, but she was having a sexy secret affair with her ex-husband Bill’s son, Wyatt. Hope Logan (Annika Noelle) had also returned to Los Angeles, and helped Liam through his heartbreak over Bill and Steffy, while also relaunching her Hope for the Future Line with Thorne as designer. New interns, Emma Barber (Nia Sioux) and Julius’ nephew, Xander Avant (Adain Bradley) were hired and began dating. While Brooke pushed for Hope to marry Liam, Ridge campaigned for Liam to reconcile with Steffy. Just as Liam decided to forgive Steffy and return home, Wyatt told his brother he’d seen her embracing Bill at Spencer Publications (another set-up by Bill), and Liam instead proposed to Hope and made love with her. Their wedding didn’t happen because Wyatt learned he’d been set-up and pulled Liam away from the altar to tell him the truth. When Hope realized Liam’s decision had been based on Bill’s lie, she didn’t want to get married that day. Wyatt, meanwhile, was upset when Katie broke up with him, deciding she couldn’t envision him as his half-brother Will’s stepfather. Thorne moved in on Katie, and Wyatt struck up a passionate relationship with Sally, who had been dumped by Thomas. Liam moved back in with Steffy when their daughter, Kelly (named after Liam’s late mother), was born, but when Hope turned up pregnant, and Steffy caught Liam kissing her, Steffy decided she was through. She went to Bill, offering to marry him in exchange for his 12.5% of Forrester Creations shares and a deal was struck. Ultimately, she decided to remain single and focus on her career and baby girl, and Bill elected to sign over the shares to her anyway. Steffy announced a relaunch of the lingerie line, and Emma’s stalkerish rival for Xander’s affections, Zoe Buckingham (Kiara Barnes), was hired as a model, causing some tension. Steffy encouraged Liam to be with Hope, and he proposed. Steffy shed a few tears but turned her attention to making changes at Forrester Creations and being an advocate for female empowerment. 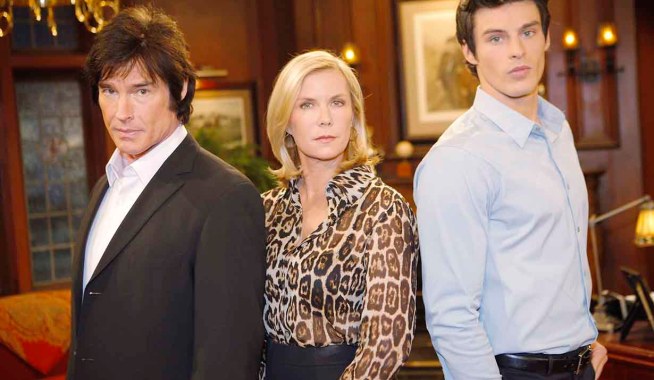