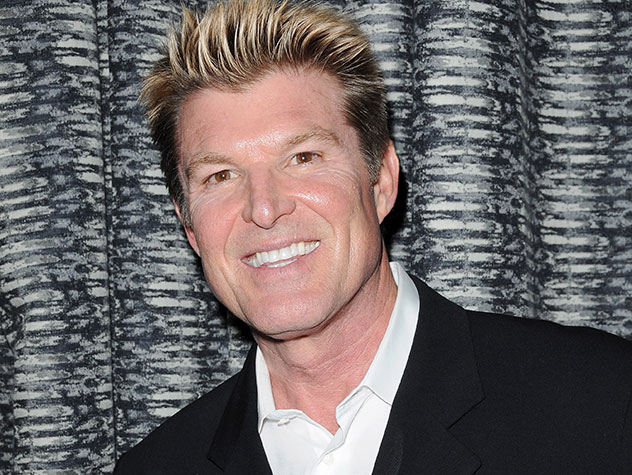 Useful information about Thorne Forrester (Past)

* Became entwined in the Brooke/Ridge/Taylor romantic triangle.
* Single dad to Allie.
* Baby Aly, Thorne’s daughter, was named after his ex-lover, Macy Alexander.
* Always played second fiddle to Ridge – even to the point of being demoted from President to Vice President of the company when Ridge came back in town.
* Shot Ridge!
* Wife Darla killed by hit and run.
* Battled drug and alcohol problems one year after wife, Darla’s, death.
* Became involved with Taylor, who killed Darla.
* Jilted Donna Logan at the altar.
* Tried to get Eric and Stephanie back together.

Who's played Thorne Forrester (Past) over the years?

Thorne is the youngest son of Stephanie and Eric Forrester.

Thorne had many tumultuous relationships with Macy, but they finally ended up not being together. Later, he married Brooke, but their marriage was doomed to failure. He found happiness with Darla Einstein and the two married.

Thorne was made president of Forrester Creations, but upon Ridge's return, the presidency was transferred to Ridge. Enraged, Thorne left Forrester Creations and joined Spectra, taking some of Forrester's designs with him. However, Thorne decided that it wasn't fair to use Forrester's designs and began designing his own clothing lines, enhancing Spectra Couture's designs with his own. Thorne's parents had discouraged him earlier in life, telling him that Ridge was a better designer, and he hadn't made any since. This was a new life for him!

Sally, however, had bet everything she had that Spectra would win the fashion show, but after they lost, Thorne not only lost his job, but lost the company as well.

Thorne's happiness wouldn't continue, however. On his daughter, Aly's, 5th birthday, Darla's niece Phoebe had a flat tire and was stranded on the side of the road. Phoebe called her mother, Taylor, who was drunk, and asked for help. Taylor, thinking Phoebe was in trouble, jumped behind the wheel and drove to her aid, not knowing that Phoebe had also called Darla. Darla made it to Phoebe first and, as she was on the side of the road fixing the tire, was hit by Taylor. Afraid that Taylor would be in big trouble, Phoebe convinced her to not come forward with the truth about the accident. Darla died and a crushed Thorne sought comfort from his friend, Taylor, who eventually became his lover and then his fiance. He had no idea that the woman he loved was actually the woman who killed his wife. Taylor hid the truth from him as long as she possibly could, but eventually guilt overtook her and she came clean about the accident. Thorne was furious and called off the wedding, especially once it became clear that Aly did not want Taylor as a step-mom.

One year after Darla's death Thorne found himself mired in a deep well of drug and alcohol problems, and horribly lonely. He ran into Donna Logan at a bar, however, and she quickly changed things around. The two became lovers and then engaged.

It wasn't until Thorne & Donna's wedding day that Donna's sister Katie revealed to Thorne that Donna didn't love him and was only marrying him to get revenge on his mother, Stephanie, that Thorne came to his senses. He left Donna at the altar.

After his failed wedding to Donna, he and Katie became friends. However, when Eric took up with Donna, Thorne teamed up with Felicia to break the two of them up. This of course strained Thorne’s new-found friendship with Katie.

In his never ending quest to get Donna (who was now Eric's wife) out of his father’s life, Thorne helped Ridge and Felicia try and dig up dirt on the new Forrester Creations employee, Marcus, who Donna hired. They discovered Marcus was Donna’s son that she gave away for adoption many years ago, but instead of becoming angry, Eric welcomed Marcus into the fold.

When Eric fell into a coma, Thorne sided with Ridge and agreed that they should take control of the company from Donna. That didn’t work out so well and while Eric recuperated at home, Thorne helped Stephanie keep Donna out of Eric’s life by banning her from the house. He then assisted his father in spying on Donna to find out if she was being faithful to Eric or cheating on him with Owen.

Becoming tired of playing second-fiddle at Forrester Creations, Thorne teamed up with Taylor and her kids to wrest control from Ridge and Brooke. Thorne told Taylor he forgave her for her role in Darla's death and they kissed.

Thorne was suspected of giving Forrester designs to Jackie M., but the real culprit was Rick. Still, Brooke made Rick president instead of Thorne, and Thorne resigned from Forrester.

Thorne eventually returned, but Bill Spencer, Jr. took control of Forrester and made his new wife Katie CEO. Katie asked Thorne to be vice president, but he turned it down. Thorne tried to sabotage Bill with an ugly clothing line, but was left out in the cold when Steffy Forrester got the company back from Bill and Thorne got none of the stock.

When Liam Cooper came to town looking for his long-lost father, Thorne was a possibility because he had dated Liam's late mother Kelly Cooper, but DNA proved Bill was his father.

After Thomas lied to get Stephanie's stock in Forrester – giving Taylor and her kids controlling interest – Thorne and Taylor reignited their relationship and plotted to take over the company. Thorne made his move, but Taylor decided not to pit her children against their father, Ridge. Thorne and Taylor continued to date a bit but eventually ended things.

At Stephanie's celebration of life party, Thorne was able to clear up issues with his mother before she died. Later Thorne turned down Eric's offer to be Forrester president and stayed in shipping. But once sales slipped under Rick, Thorne worked with Thomas to convince Eric he should be president. It didn't work.

Thorne was ecstatic when his daughter Aly returned from college and they both moved into the Forrester mansion with Eric.

Thorne moved to Paris to work at Forrester International while Aly shadowed Hope at Forrester. After Aly had extreme negative reactions to Hope's boyfriend Wyatt Fuller, Thorne told Brooke that Aly had anger issues related to bullying and Darla's death.
​
Thorne began dating Taylor again, and Aly was enraged when she found out. But after realizing how happy Taylor made Thorne, she came around. Thorne was happy that Aly had finally found peace and he could be with Taylor.