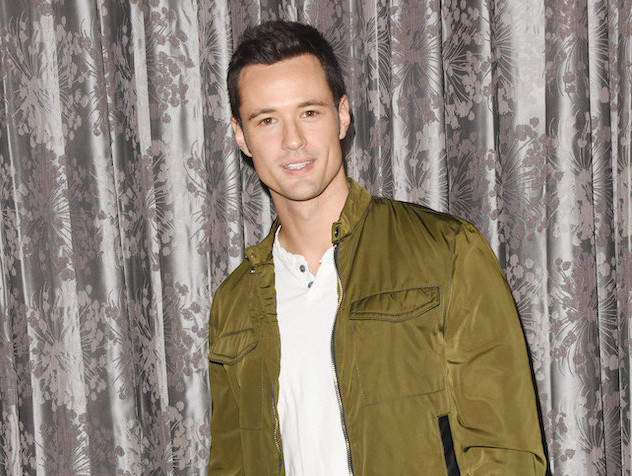 * Born on January 7, 1998 in Thorne Forrester's car.
* Lived at 3197 Holden Drive, Beverly Hills, CA, 90214.
* Was aged to 16 in early 2004 and again to 18 in September 2004.
* Fell for his former babysitter, Amber Moore.
* Married Gabriela Moreno so she could stay in the country.
* Left for college after marriage to Gabriela was annulled.
* Came back to town to try and get Ridge to reunite with Taylor. It didn’t work.
* Kissed Brooke Logan while on a business trip to Paris.
* Survived a plane crash in the Pacific Ocean. Ate psychedelic berries on a desert island with Brooke to survive.
* Told everyone he slept with Brooke in exchange for Stephanie Forrester’s 25 percent of Forrester Creations. After she died it was revealed she really left all power to Eric Forrester.
* Worked in the basement of Forrester after his lie was exposed.
* Proposed to Hope Logan in Cabo San Lucas. She said no.
* Dated Caroline Spencer when she arrived in LA. He lost her and the presidency to Rick Forrester.
* Moved to Paris to work with Thorne at Forrester International.
* Owned 5 percent of Forrester Creations but signed proxy to give Ridge what he needed to overthrow Rick.
* Returned for Aly Forrester’s funeral and rejoined the LA team as a designer.
* Had sex with Caroline when she was upset over her breakup with Ridge. They had been drinking and he did not know she had also taken pills.
* Punched Ridge and was sent back to International.
* Did not know Caroline was pregnant with his baby and not his father’s.
* Co-parented his son Douglas with Caroline in New York until her death.
* Became obsessed with Hope Logan upon his return to Los Angeles.
* Used his son's need for a mother and Hope's grief over the presumed loss of her child to manipulate her into marrying him.

Who's played Thomas Forrester over the years?

Taylor gave birth to Thomas Forrester in the back of Thorne's car. At the time, Thorne and Taylor convinced everyone the child was theirs when it was really hers with Ridge. Though Taylor wanted to tell the truth, Brooke's announcement of a pregnancy by Ridge kept her quiet until Brooke and Ridge's wedding day. Taylor had learned that Brooke had been lying and when this truth came out as well as Thomas' true paternity, Ridge had the marriage annulled and returned to Taylor and their son.

The first few years of Thomas' life were hectic. His mother gave birth to twins, one of whom was presumed dead while actually being kidnapped by Morgan DeWitt and then rescued by Ridge. Suddenly in high school, Thomas met Caitlin Ramirez, who was working as an intern at Forrester. Soon they were dating but she was also dating his older brother, Rick. Disturbed by this, he sought comfort with his former babysitter Amber Moore and they soon became a couple, much to the chagrin of his family. Ridge in particular never stopped meddling in Thomas' love life.
The young man would come to realize that Amber was the wrong woman for him, particularly when she nearly killed Ridge in an effort to win him back. He tried to move on by resuming with Caitlin but it went nowhere. He soon filled his time with his new friend Gabriela Moreno. The pair bonded over the loss of their mothers and Thomas shared his joy with her when Taylor returned from the dead. Trying to organize his life, he sought an internship at Forrester to fulfill his dreams as a designer. They turned him down so Spectra Couture quickly snapped him up. He also spent time trying to convince Brooke to let his father and mother reunite so that he could have his family back.

He and Gabriela became closer and she told him that she was an illegal immigrant. In a bid to keep her in the country he took her to Vegas to be wed. The family opposed it, though Taylor was more sympathetic. They were allowed to live in the mansion together only on the condition that they didn't have sex. This proved futile and the newlyweds couldn't resist forever. Discovering a condom wrapper, Taylor confronted them angrily before going to immigration. While Gabriela's lawyer managed to keep her in the country, the two women battled, although Taylor did her covert best to keep her in the country. Finally, Gabriela agreed to annul the marriage and left. Thomas bid adieu to L.A. to go to college. He returned for various family occasions and once to help Taylor, Steffy and Stephanie try and convince Ridge to reconcile with Taylor so they could all be a family again. Although Ridge enjoyed bonding with his kids and Taylor, he made it clear his future was with Brooke.

Thomas returned to become involved in Forrester business but after Taylor gifted Steffy with her shares in the company he decided to side with Brooke in the Forrester/Logan war. He appeared to have fallen for Brooke, and when they traveled to Paris together while working on the Taboo line, he kissed her. Thomas fought Ridge to introduce a Taboo line for women and after Ridge gave Thomas 5 percent of his stock, Thomas plotted against his father.
Thomas flirted with the young women at Forrester but dated Dayzee Leigh. When Thomas traveled with Brooke to Australia to do a press conference, their plane crashed in the ocean. While stranded on an island Thomas and Brooke ate hallucinogenic berries. After being rescued by Ridge, Taylor, and Bill, Thomas and Brooke were worried about whether or not they kissed while high. Back at home, Thomas was persuaded by Stephanie to lie and say he'd slept with Brooke on the island in return for her 25 percent of Forrester. Thomas' lie was exposed just as Ridge was about to remarry his mother, Taylor. Thomas lost the friendship and respect of Brooke and Dayzee over this, and his family members were angry with him. Thomas humbled himself and went to work in the basement at Forrester. Soon he was back in the good graces of most of his family. Thomas set his sights on winning Hope as his love and took her to Cabo San Lucas, where he proposed. Hope turned him down because she still loved Liam.

Thomas began pursuing Caroline Spencer when she arrived in town, and after a brief challenge from Rick, was successful. Thomas was the first person in town that Caroline told she had two mothers. He and Caroline became an item and worked together to prove that Marcus Forrester didn't hit Anthony Wallace with his car. Thomas became interim CEO of Forrester while Ridge took an extended leave, which caused more friction with Rick. They fought and Rick even crashed through a window, and soon Caroline left Thomas for Rick. After Stephanie died Thomas wanted to use the 25 percent shares Stephanie promised him but she instead left all the power with Eric. Thomas was livid but accepted a position as vice president. He worked with Thorne to get them both better positions but they both eventually moved to Paris to work at Forrester International.

Thomas signed over his last 5 percent stake in Forrester to Ridge to overthrow Rick and took a job back in LA on the design team with his father and ex Caroline, who were now dating each other. Thomas pined for Caroline and when Ridge broke up with her she was devastated. Thomas and Caroline had sex after some wine, though Thomas was unaware she had taken pills and didn’t know what she was doing. He swore he would have never taken advantage of her and promised to keep their one night a secret since Caroline and Ridge quickly reunited. Thomas was unaware that Caroline had gotten pregnant that night, but Ridge knew everything and would not let up on Thomas about his womanizing. The criticism only continued as Thomas dated models and interns at Forrester, and after Thomas punched Ridge he was shipped back to International.

When Thomas came back to LA he suspected Caroline’s baby might be his but she assured him it was not. He then pursued Ivy Forrester despite her relationship with Wyatt, and after securing a kiss he succeeded in causing friction between them. Ivy went back to Australia and Thomas began to have a change of heart about his womanizing. He apologized to Caroline and was with her when she began to have labor pains. He took her to the hospital, and it turned out to be false labor. After helping Caroline with contraction again before she had the baby in a birthing pool at the Forrester mansion Thomas promised to be the best big brother ever.

After it was eventually revealed that Caroline's baby, Douglas, was, in fact, Thomas', he moved to New York to be a family with them upon Caroline faking an illness. However, he stayed when the truth about her lie came out. The two decided they were better co-parents than romantic partners, but sadly she died anyway from a blood clot. Thomas returned to Los Angeles with Douglas, suddenly obsessed with reuniting with Hope Logan, who was married to Liam Spencer. After Hope was led to believe she lost her baby during childbirth, Thomas preyed on her grief as a mother. Using his own son as a pawn, Thomas manipulated Hope into leaving Liam and agreeing to marry him so she could be a mother to Douglas. They became engaged in July 2019.