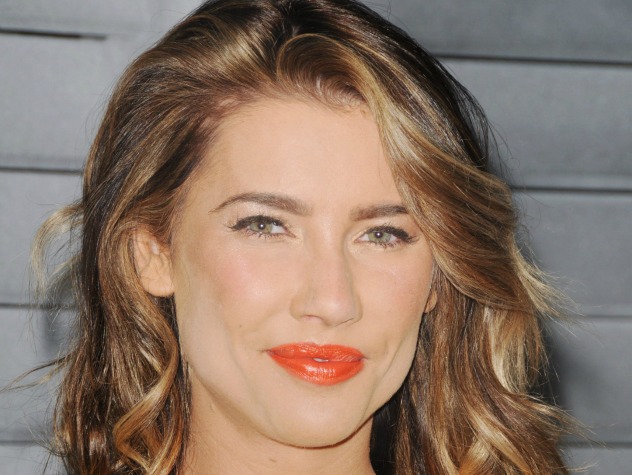 * Was named for her grandmother Stephanie Forrester.
* Has a twin sister Phoebe.
* As a child, was thought to have gone overboard and eaten by a shark, but survived only to be kidnapped by Morgan DeWitt.
* Went to school in London.
* Kept Marcus' secret that he was Donna's son.
* Tried to get her parents to reconcile even though Ridge was in love with Brooke.
* Married Liam Spencer.

Who's played Steffy Forrester Spencer over the years?

Born in 1999, Steffy is the eldest twin by a few minutes to sister Phoebe. When she was two years old, her parents took her on a trip to St. Thomas where they renewed their wedding vows in front of her, her sister and brother Thomas. While there, Steffy fell off a boat and was presumed to have been eaten by a shark. Fortunately she survived, only to be kidnapped by Morgan Dewitt who was obsessed with Ridge. Steffy’s mother, Taylor grew suspicious of Morgan and happily discovered her daughter alive and well in Morgan’s home. Morgan prevented Taylor from leaving with Steffy and held her captive in her basement. However, Ridge figured things out and eventually saved his wife and daughter.

Since then Steffy has sporadically appeared on-screen while rapidly aging in the process. She left Los Angeles to attend school in London, England, but returned home in 2008 at her father’s request. Ridge offered her a job in management at Forrester Creations, but she opted to learn the ropes from the ground floor and took a job in the shipping and receiving department instead.

While working at Forrester, Steffy befriended Marcus Walton who had also recently begun working there. She eventually learned his secret that he was really Donna Logan’s son, but agreed to keep quiet until he and Donna were ready to announce it. Unfortunately, the family found out and exposed the secret, but Donna’s husband and Steffy’s grandfather, Eric accepted the news in stride and welcomed Marcus to the family. Steffy was relieved, but Ridge was still disdainful of Marcus and warned his daughter away from the young man. However, Steffy didn’t listen and continued to date Marcus.

Despite Ridge’s contempt and their divided loyalties when Donna was granted power of attorney instead of a Forrester during Eric’s coma, Marcus and Steffy fell in love. Ridge eventually came around to accepting Steffy’s boyfriend when Marcus was the one to figure out that Eric’s coma was a result of being poisoned.

Steffy then became set on reuniting her parents. She talked to Ridge and Taylor separately trying to remind them of the happy times when they were a family. Ridge explained that their time together had passed, but Taylor was a little more receptive. Taylor decided she did indeed want Ridge back and enlisted Steffy and Thomas to convince Ridge to return to the fold. Despite their best efforts, Ridge remained devoted to Brooke.

Steffy became involved with Rick after Phoebe died tragically, and then moved on to Bill Spencer II as she set out to get Forrester Creations back from him for her family. Once she accomplished this, her sights became set on getting Brooke and Hope out of the company. She went after Hope's boyfriend, Oliver, and even tried to blackmail him.

Steffy wound up going to work overseas for a while after she was blamed for the video of Brooke and Oliver coming to light during a press conference in which she was supposed to make nice with Brooke.

After Steffy returned, she set her sights on Bill Spencer II, deciding that they 'get' each other. They bonded while searching for Brooke and Thomas after a plane crash, and Steffy turned to Bill after Ridge left Taylor at the altar. Steffy was prepared to move in with Bill when he left Katie, but Katie had a heart attack and Bill told Steffy they had no future together.

Steffy next turned her attentions to Bill's son Liam after he saved her from drowning in her bathtub. Even though Liam was engaged to Hope, Steffy befriended him and was there whenever he felt unhappy with Hope. When Hope caught Liam and Steffy sharing a friendly kiss, Hope dumped him. Liam proposed to Steffy immediately and they slept together.

Steffy and Liam's marriage hit the rocks in Cabo San Lucas after she tried to hide the fact that Hope and Thomas were at the same resort. Steffy suffered a head injury in an ATV accident, which enabled Bill to try and keep the marriage going by pretending her life was in danger, but shortly after their return to L.A., Bill's deception was exposed, and Liam left Steffy to be with Hope. Steffy refused to sign annulment papers, and chose to wait out the six-month period before the divorce was final in hopes that Liam would stay with her. Shortly before the waiting period was up, Steffy signed the annulment papers in Aspen to set Liam free. Liam tore them up and kissed her.

Steffy went to Italy for Hope and Liam's wedding as a sign of goodwill, and wound up sharing a loving interlude with Liam when he mistakenly thought Hope left him at the altar. Steffy's hopes were dashed again when Liam married Hope. Back at home, a video of Steffy and Liam in Italy surfaced. Steffy watched it repeatedly, but then deleted it so as not to put Liam's marriage in jeopardy. But she emailed a copy to herself first.

Hope eventually saw the video and insisted on a new, fresh wedding to Liam back in LA. The night before the nuptials, Steffy kidnapped Liam for an evening of fun to show him what life could be like without Hope. Nothing happened between them, but Liam showed up late to his wedding to Hope with dyed hair and a fake tattoo. Hope ended their relationship and Liam turned to Steffy. They made love.

Steffy and Liam decided to fly to Hawaii. They were diverted to Aspen so Bill and Brooke could take the jet to look for Katie and they could watch Liam’s baby brother Will. When they returned to LA, Steffy moved in with Liam. She soon learned she was pregnant, but when she went to tell Liam she caught him kissing Hope. She kept her secret, and demanded Taylor do the same. Steffy allowed Liam to explore his feelings for Hope, but was still surprised when he asked her to move out.

She continued her pregnancy in secret, but when she learned Hope and Liam were to marry, she stopped the ceremony and told Liam about the baby. Liam decided to marry Steffy instead, and she rode up the aisle on a motorcycle in a black gown designed by Eric.

After their Aspen honeymoon they prepped for the baby. Tragically, Steffy lost the baby in a motorcycle accident despite promising Liam she would stop riding. A complication from her D&C left her sterile, but Steffy didn’t tell that to Liam. Instead, she told him she wanted a divorce and moved to Paris. He followed her there a few weeks later and she told him the truth - and that she wanted him to build a life with Hope. But, she wanted a divorce, not an annulment, which meant Liam would have to wait six months to marry Hope.

Steffy ultimately granted the annulment, but requested that Liam make her a tribute video after accidentally seeing the one Liam made for Hope. He agreed, and emailed her the video. Quinn Fuller got a copy of the video and anonymously sent it to Hope in order to cause problems with her and Liam so her son Wyatt could step in.