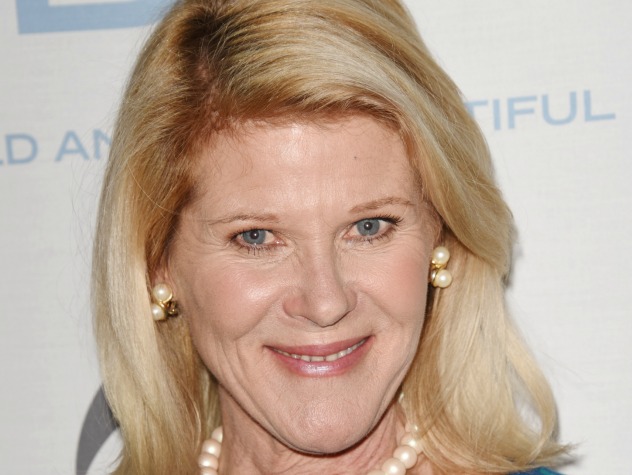 * Nicknamed "Pammy" by sister Stephanie.
* Lives in the Forrester guest house at 369 Willow Hill Road, Beverly Hills, CA, 90210
* Not abused by father like sister, Stephanie, but was aware of the abuse Steph was enduring.
* Has a secret crush on Eric Forrester.
* Tormented Donna because Eric chose her over Stephanie.
* Poisoned Eric to try and get him to break up with Donna.
* Had a brain tumor which was believed to be the cause of her craziness.
* Was used by Stephen Logan Sr. to get back at Stephanie.
* Was engaged to Stephen Logan Sr.

Who's played Pamela Douglas over the years?

Pamela willingly took on the role as the dutiful daughter and took care of her (and Stephanie's) mother after their father died. Stephanie went on to marry Eric and have the glamorous life of a fashion designer in Los Angeles, while Pamela and their mother remained in Chicago.

Pam, who'd done little more than exchange Christmas cards with sister Stephanie for years, was stunned when Stephanie suddenly turned up in her life again. Stephanie confided to Pam that she would need to confront their mother, Ann, about the abuse that she had suffered at the hands of their father in order for her life to be complete. Ann, ever the supporter of Stephanie, was aware of the abuse and had tried to protect Stephanie, which only made their bond stronger.

Later, at Eric's request, Pam and Ann came to LA to celebrate Christmas with the Forresters. Pam right away bonded with Felicia (and had already bonded with Eric). At first Stephanie didn't want them there, but due to a loving gesture by Thorne's daughter, Ally, eventually came to forgive Ann and allow Ann and Pam to stay.

Stephanie spent some time in Chicago, getting some long-overdue mother-daughter bonding in, leaving Pam in LA with instructions to keep an eye on Eric, with whom Stephanie was estranged and with whom Jackie Marone was getting too close for comfort. Pam stayed and made the Forrester Mansion a warm and inviting home.

Pam had her work cut out for her, as Jackie was a demanding presence in the home and once, when Jackie too brazenly hit on Eric, Pam sent her packing in no uncertain terms. But, shamefully, Pam was falling for Eric herself. Eric asked her to stay in a guest house on the grounds and she accepted.

After an argument with Stephanie, Pam moved back to Chicago with Ann, but returned when Stephanie was shot. Pam didn’t come back alone, as this time she brought with her a Doberman Pinscher named Tiny. She also had a new mission, which was to win Eric over for herself, but he was having an affair with Donna. She didn’t let that stop her though, as she did everything in her power to get Donna out of Eric’s life. With the help of Tiny, Pam began to terrorize Eric’s new love. She had Tiny tear up one of Donna’s thongs and instructed Tiny to literally chase Donna out of the house. Pam left town again when Ann called because Pam hadn’t been taking her medication, which was needed for her recently revealed bipolar disorder.

Eric and Stephanie had an anniversary party, which brought Pam and Tiny back to town. Eric admitted to Pam that he was in love with Donna and intended to be with her. Pam stayed in town and began working at Forrester Creations as a receptionist and Eric and Stephanie began divorce proceedings.

With Eric and Donna now together, Pam began playing pranks on Donna in order to embarrass her out of Eric’s life, so he would return to Stephanie. She did such things as turning her hair green, turning her teeth brown and locking her in a tanning booth. Pam bragged about her tricks to Stephanie, but the elder Douglas told her sister that she should leave Eric and Donna alone, because her relationship with Eric was definitely over. Things escalated however when Donna fed Tiny Pam’s famous lemon bars and Tiny died of a preexisting heart condition.

Donna and Eric eventually married, but Pam was determined to get Eric and Stephanie back together. She went off her meds and began poisoning Eric in hopes of weakening him to make him realize he was too old for Donna. However, it backfired on her and Eric had a heart attack and landed in a coma. Donna went up to the Big Bear cabin for some alone time, but Pam followed her and tied her up to a chair, poured honey on her and left her to be attacked by a bear. Luckily, Owen found Donna in time, but Pam took off on the run.

While in hiding, Pam continued to terrorize Donna by hitting her mother with a car and orchestrating Marcus’s cobra attack. She revealed herself to Donna and warned her she would do worse if Donna didn’t stay away from Eric. Fearing for Eric (who had come out of his coma) and her family’s safety, Donna did what Pam instructed and signed divorce papers.

Owen tipped Stephanie off to her sister’s crazy antics and Stephanie and Eric put a plan in motion to lure Pam out of hiding. It worked, but Pam got so upset she passed out. Once at the hospital, it was revealed that Pam had a large mass on her brain that was probably the cause of her bizarre behavior. After surgery to have it removed, Pam didn’t remember recent events, but apologized upon learning what she had done and begged for forgiveness. Stephanie and Eric convinced Donna not to testify against Pam so Ann could take her back to Chicago where she would receive treatment. Donna reluctantly agreed, but wasn’t buying Pam’s sudden innocent act.

When Stephen Logan decided to get back at Stephanie Forrester for his wife's death, he used Pam to do it. He convinced her he was in love with her and urged her to shoot her sister. The plan backfired, but Pam forgave Stephen and they eventually became engaged.

After Stephen ended their engagement, Pam blamed Stephanie for never accepting him and struck back by stealing Forrester designs for Nick and Jackie.