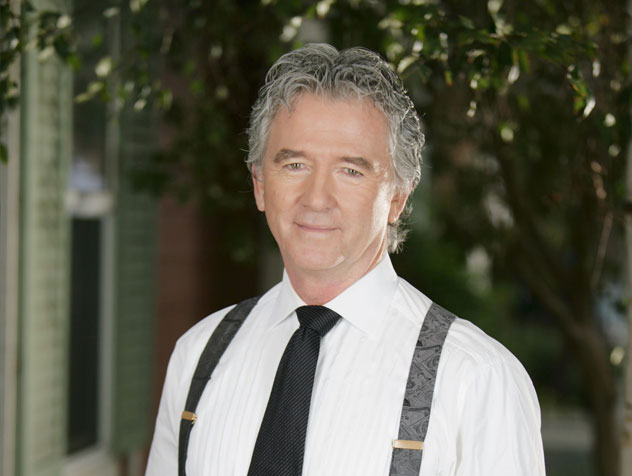 Patrick Duffy (Stephen Logan Sr. on The Bold and the Beautiful)

Patrick Duffy was born in Townsend, Montana, the youngest of two children and only son to tavern owners Marie and Terence Duffy. During high school, Patrick earned credentials in theater arts at Cascade High School in Everett, Washington, that entitled him to teach. He graduated in 1967. During his senior year at the University of Washington he ruptured both his vocal cords. He created the position of actor-in-residence, where he worked as an interpreter for ballet, opera, and orchestra companies in Washington. He graduated with a drama degree in 1971.

He taught mime and movement classes at this time, which is how he met his wife, a ballet dancer with the First Chamber Dance Company of New York. Patrick appeared in Off-Broadway plays, while working as a carpenter. They moved to Hollywood where he drove a florist's delivery truck, and acted in small television and movie roles.
Patrick married his wife Carlyn Rosser in a Nichirin Buddhist ceremony on February 15, 1974. They have two sons, Padraic and Conor.

On November 18, 1986, Duffy's parents were murdered by two teenagers during an armed robbery at their tavern. They were convicted of the murders and sentenced to 75 years in prison.