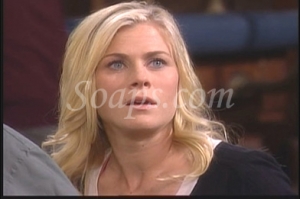 All the green beer is gone and the Results are in from our St. Patty’s Day Poll!

Soaps.com started out our St. Patrick’s Day Soapy Survey by asking how Irish our visitors are. 33% of people claim to only be Irish on St. Patrick’s Day, drinking that green beer, while a smaller percentage ranged from having no connection to the Emerald Isle, to having a smaller fraction on their mom or dad’s side.

Luckiest character winners:
General Hospital’s Sam came in with the most votes. Some folks say she never has to pay for her crimes and one fan says, “She gets away with endangering children.” Sonny, also a GHer came in second place with the votes, while DOOL’s EJ DiMera came in third place with fans telling us that he gets away with murder – must be lucky!

One fan’s answer stood out for us. “James Stenbeck – he never dies!”

Which character deserves to find a pot of gold at the end of a rainbow?
Most votes went to Elizabeth Webber GH, with Sharon Wilson, Y&R following and Kristina Corinthos Davis from GH in last place.

Which character doesn't deserve to be lucky enough to find a pot of gold?
Victor Newman wins from Y&R, Marty Saybrooke from OLTL and Sonny, GH.

Which character should a leprechaun play a trick on, this St. Patrick's Day? What should s/he do?
Most votes went to Tracy Quartermaine, GH. A voter tells us that the Leprechaun should steal her money, the second most votes went to EJ DiMera. One voter thought that the Leprechaun should take his kids from him and the third runner up was Sam McCall, GH. A few voters thought her breasts should fall out of her blouse only for people to discover they’re only water balloons. [Interesting!]

Honorable mention goes to these voters below for answering that second question and giving us a chuckle. Somebody said Vivian Alamain from DOOL should be buried alive, ATWT’s Damian Grimaldi should be forced to dress as a woman while Victor Newman from Y&R should have Colleen come to him in a nightmare.

Who would most apt to lead the St. Patty's Day parade?

Luke Spencer from GH received the most votes at 60% with Caroline Brady (DOOL) coming in second place.

If you didn't make the voting, please feel free to vote below for all categories! Do you want to know what some of the soap opera actors told Soaps.com in regards to another past holiday? Find out in Interviews: Spend Valentine's Day With the Soap Stars!

In The Closet Soap Viewers