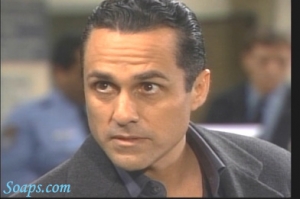 Fans will miss 'Babe and Jamie' on AMC.

Lorraine J.: I don’t want to see Babe and Jamie leave the show. It won’t be the same without them.

Fay E.: I’m sorry but the story line you have going is about to sicken me. Get back to a more palatable story so I can watch it again and be amused at the dramatics, not this weird stuff.

Ginny T: My mother watched this show for years and I have watched it also. When she was alive we would always talk about it. Right now, I am glad she can’t watch it. I think today is my last time.

As the World Turns:

Not thrilled with ATWT:

Gilda S.: Please don’t pair Jack and Katie. When Carly comes back she and Jack need to be together again. They are the couple that will, in 10 years, be the Bob and Kim super couples that no matter what they’ll be together. Katie deserves to find someone that will mix things up with her and keep her interested…THAT IS BRAD…

Cecilia M.: I have been watching ATWT for almost 50 years and I am almost ready to quit. What has happened? It is boring and it takes too long to get the point.

Jean L.: If Brooke goes after Nick again, my friends and I have vowed to stop watching this show. It is getting ridiculous!

Pedro S.: Please stop sending Brooke from brother to brother and find her someone new or leave her with Ridge. There is so much chemistry between them unlike with Nick. It’s boring.

Diane R.: I’m completely disgusted with the story line that has Brooke dumping Ridge and heading right to Nick even knowing that he is engaged to Taylor. She acts like a spoiled child, so I see where she has no common sense with raising her children (Phoebe) I’ve never written to any soap, but it disgusts me to think that Ridge is wrong concerning his daughter and Rick’s relationship (uck!) and Brooke is right. I have three daughters and I think it’s sick. I’ve watched the show for years but am considering stopping if this type of story line continues. Completely Disgusted in New York!!!

Days of Our Lives:

Loretta M.: I hope these new writers are better than the current ones. The storylines are getting stupid and laughable sometimes. Drake & Deidre deserve more screen time. I’ve been watching Days forever & I’ve never been this bored with a show that I fast-forward by a lot of it. Mimi & Max were perfect together-why is she gone? Stephanie Johnson was a good addition to the show. You could have done a lot with her for Stephen to deal with.

Heather M.: I think the EJ scene is getting old. I haven’t watched it for a week, now it’s the same thing over and over. Get to something now before a lot of other people quit watching too.

Brandon & Maria H.: When are you guys going to move on with the story lines. All of them are getting boring. They are also getting hard to follow.

Tra D.: Please make Sonny a gangster again. Get real with security at his place of business. No self respecting mob boss ever has people barging in his office at will “get real”. In reality Craig would be a dead man already. Please don’t leave him in the story too long. By the way, gangsters don’t shoot at center mass…they put one in the headfirst…the next time you have Sonny shooting, at least let him do it right.

Anne B.: The current premise is ridiculous and it has taken a long time to get Emily and Nicholas together and the two doctors. Now, you’re planning to split them all again. Give me a break! Get away with the Englishman by having Nicholas’s cousin discover what is going on. Then you can create a new story line, perhaps with Scorpio.

Marti M.: I realize General Hospital is not filmed in New York and soaps are filmed in advance but.... could they try harder to have weather actually coincide with the date? Today is March 30th...still not warm weather in these parts! How could Alexis and Christina be out in the park, picking flowers????? Flowers are just starting to pop above ground by two inches! A little more realism please.

Denise M.: I am a watcher of GL and have watched for years. But now it is starting to be disgusting to me. Too much sharing in relationships, cousins, now sisters will share husbands. It's starting to be too much, me and a few other watchers in my area are seriously thinking of stop watching GL. Why won't you let these segments be real for a change. This is making me sick when I see Josh with Cassie. She needs to go to jail. Nobody has any values any more.

Ava F.: Why don't you let Josh free, and make Philip be the one to shoot Allen? Don't let Josh and Reva's sister be together. They are two goodie shoe's. You also should find that guy who Allen's wife put away; make your show somewhat real. No one goes away when they kill someone! And let Billy be with someone like Dina.

Sandra M.: I have watched The Guiding Light for almost 50 years. And now I am not watching. As much as I like most of the characters and situations I cannot get past pairing Josh with Cassie. It has totally destroyed the show. There is no way the man who Josh has been portrayed in the last 20 years would hook up with Riva's sister, and no way would a LOVING sister hook up with her sister's husband. Temptation yes, drama through denial and the revelation why Reva left should have placed a kibosh on the whole thing. I can't tell you how sickening it is to watch those two, so I quit. And, I know I'm not the only one. It's not just youngster's who spend money, we more mature people spend lots too. The Guiding Light needs a core Mom and Pop and that was becoming Josh and Reva and now it's gone, gone, gone and me too.

Nash has to go?

Adnil R.: Evangeline just went through a crisis in her life by losing the man she loves. She was faithful and honest with him. He treats her like a cold piece of spoiled meat. He obviously hates Todd much more than he loved her. Evangeline should be given more airtime to work through this crisis.

Marianne F.: Enough of the Jessica and Nash story line-Antonio & Jessica are great together. It is really getting silly. Sorry but I hate to watch this anymore.

Debbie G.: You need to get rid of Nash. He is a sneaky no good type. He doesn't belong with Jessica. Let her and Antonio is happy. The Nash character has got to go!

Monik L.: I just want you to know my opinion concerning Passions. Why you make us wait and wait for Ethan and Theresa and Luis and Sheridan to be together. I've watch Passion since it's started but I am so tired of waiting for my favorite couples to be together. I think that I'm going to stop watching it. It's ridiculous the turn that you take to keep the show going. I'm sure that you can make some other kind of story to keep it going and to put the couples that we like together. Anyway, just to let you know that I like the show very much but I'm very tired of waiting for them to be together. It's been too long already so please find some other stories and put the couples we like together before you lose too many fans

Tammy L.: I have been watching the show and it makes me mad because I want Ethan and Theresa to be together. I thought when Gwen left, they would finally be together but they're not so please let them. A devoted fan…

Karen K.: Who do I contact in regard to letting the writers know that the story line is getting BORING. I have watched this soap since it began and frankly when I went into the hospital for back surgery and didn't watch it for a week it was in the exact same place as when I left it. Signed BORED TO DEATH!

In regards to Victoria Rowell quitting:

Katie M.: After 20 yrs of watching Y&R, I am writing to let you know I will never watch another show since Dru's character is leaving.

Dyraneshia C.: While reading your comings & goings I'm saddened to see that Dru of all people will not return to the cast. And as for Nick and his RED HEAD wife, I'm sick of those two please put him and the lovely Sharon back together.