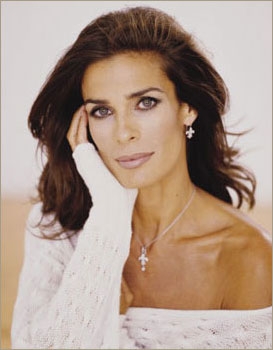 Soaps.com readers put it to a vote in November of 2006. We asked you all to cast your vote on who the most beautiful woman in soaps was in 2006!

While we realize that there were many more beauties to choose from, our polls will only accept five names!

We asked you who the most beautiful girl in Pine Valley was and you gave Alicia Minshew (Kendall Slater) most of your votes. She scored a whopping 43.0% with Alexa Havins, (Babe Chandler) following close behind at 35.0%! Congrats All My Children beauties!

As the World Turns fans voted on the hottest female in Oakdale and Jennifer Landon stole 41.0% of the votes. Nobody else came close to taking first place! I personally voted on Alexandra Chando (Maddie Coleman) but found it a tough vote!

We asked you who the sexiest woman on The Bold and the Beautiful was and we found that Katherine Kelly Lange (Brooke Logan) took her place as sexiest female! At 41.0%, she won out over Hunter Tylo (Taylor Forrester) who took 25% of the votes!

You told us that out of all of the beauties in Salem, Kristian Alfonso (Hope Brady) was by far the most beautiful. She took 47% of the votes. We did leave out beauty from Days, Deidre Hall (Marlena Evans) because we only had room for five votes but we give Deirdre an honorable mention here. So many gorgeous women�. Only one vote allowed! How is one to choose?

Guess who 55% of the votes went to for the hottest female of Port Charles?! None other than Kelly Monaco (Sam McCall). Nobody else came close, and I think we can all agree that General Hospital has a bevy of beauties in its cast.

Guiding Light‘s sexiest award goes to Marcy Faith (Behrens) Rylan (Lizzie Spaulding) with 30% of readers voting for her! In the town of Springfield, there are many more lookers. We failed to mention and when I think about who is sexy on a this particular show, I flash back to the 80’s and remember everyone’s all time fave, Kim Zimmer (Reva Shayne) and that red dress she wore. I don’t remember the storyline of course, but I do remember my Mom commenting on how stunning Reva Shayne looked in that red dress!

One Life to Live‘s hottest female just happens to be Melissa Gallo (Adriana Cramer) who took 32% of the votes! The whole cast over in Llanview are so attractive – men included as you saw in our Hotest Men in Soaps 2006 piece, previously. This race was close, with Bree Williamson (Jessica Vega) taking a second place with 29% of readers votes.

Passions hottest diva award is handed over to Lindsay Hartley (Theresa Lopez-Fitzgerald) who blew all of the other beauties out of the water� even the mermaid, by seizing 75% of reader votes! That’s pretty flattering considering all of the gorgeous divas this show boasts in their cast. I think they’re all ex-models! Way to go, Lindsay!

As you all know, we also cover one primetime show, the Telenovela, Ugly Betty. It was an extremely close race with America Ferrera (Betty Suarez) votes in at 40% and Becki Newton (Amanda) taking 35% of reader’s votes. Remember, this was before Rebecca Romijn’s (Alexis Meade) time but we still wonder where the votes would have landed if Rebecca had been on just a few weeks earlier! Viewers adore ‘Betty’, and we think she’d have still taken the lead!

Sharon Case (Sharon Newman) was voted hottest female on The Young and the Restless, when Genoa City is jam packed with beauties. 40% of you gave her your votes, even over Victoria Rowell (Drucilla Winters) who took 24% of the votes! Nice job, ladies! Now there are a lot of (Michelle Stafford) Phyllis Newman devotees out there and we didn't get to put her into the vote so we'd like to make a special mention to her loveliness here!

Now then. Let's have a look at those polls to see who came in second and third places. All votes took place the week of November 16th 2006. Keep in mind we only have enough room for five names!

Vote for your favorite AMC beauty!

Vote for the hottest female on ATWT!

Who is the sexiest woman on B&B?

Who is the Hottest Female in Port Charles?

Who is the hottest girl on Guiding Light?

Who's the hottest OLTL female!

Who is Passions Hottest Diva?

Who is the hottest girl on Ugly Betty?

Who's the hottest Y & R female?

Just a reminder for all you soap lovers! We post our polls each Friday and sometimes more often, depending on the storyline. We encourage our readers to send us your poll ideas for each week. We may use them!

If you've got a poll idea or any other ideas that you want us to consider, please send it to Contact Us!