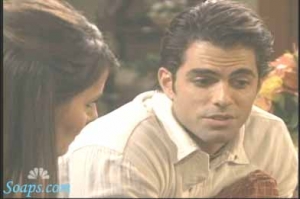 It’s that time of year again, and the daytime stars were kind enough to share their thoughts about Easter with their fans! Whether you celebrate Easter or not, you’re certain to enjoy these brief interviews.

Brandon Beemer (Shawn Brady Days of Our Lives) called Soaps.com’s Shannon Burrell ( Ugly Betty Editor) at home near the end of February regarding the Caribbean Soap Cruise that he’ll be attending. Brandon shared his Easter traditions with Shannon. “When we were young, we always celebrated Easter with dinner and going to church and getting Easter baskets with candy. But as you get older, things change. The tradition will probably start again when I have my kids.”

About a month later in mid-March, Mick Hazen (Parker Munson As the World Turns) called Shannon Burrell for an interview and the two got into a brief chat about Easter.

Shannon asks, “Do you have any family traditions or anything surrounding the Easter Holiday?”

Mick replies, “We tried having a family tradition where we paint the eggs and stuff like that, but it didnt really work out.” Laughter.

Shannon laughs and asks, “So are you going to try the eggs again this year?”

Mick laughs and replies, “Maybe. I dont think so though!”

Adrian Bellani (Miguel Passions)called Soaps.com’s Editor-in-Chief, Christine Fix Tuesday March 27th to discuss the Emmys and Passions cancellation. We also chatted for a while about Easter.

When asked about whether or not Adrian celebrates Easter, he perked right up and told me, “It’s a huge, huge religious holiday for us in El Salvador.” Not only is Easter important to Adrian, but his birthday just happens to fall on the same day! I had a chance to wish him a happy birthday, and he told me that the first thing he plans on doing on his birthday is to go to mass and start celebrating with his church.

Adrian shared a few memories from past Easter celebrations. “We used to do the whole egg hunt when we were kids,” he says. “We used to do the whole rabbit thing but we would always, always go to church go to mass.” Adrian goes on to say that he’s catholic. “Church is pretty much my priority and my family’s priority is to go and thank God and thank Jesus for everything he did for us and for dying on the cross.”

Adrian and I continued to chat about church, and his birthday and I found out that Adrian is in Los Angeles all alone! His family resides in El Salvador. “I’m here all by myself,” he admits. “My closest family would be Silvana (Arias, who plays Paloma) and Galen Gering (Luis Lopez-Fitzgerald) and Lindsay Hartley (Theresa) and Eva Tamargo Lemus (Pilar). With his family so far away, I asked if he would be spending Easter with his friends. Adrian was happy to announce that his mother and brother would be coming to town [L.A] this Sunday and “They’ll spend all next week with me and they’ll be here for my birthday and they’ll head back home!” Adrian tells me that he tries to visit his family as much as he can and although he doesn’t have much time to visit them, “I go about two, three times a year.” he says. He tells me that he’s very close with his family. In fact, “I miss them a ton but they usually come here more often than I go there,” he admits.

While he usually spends Easter with family, Adrian says, "I think this Easter it'll probably be a little different, since it is my birthday. I mean I'm not very big on birthdays in general but I do definitely want to go to dinner and do something for my birthday but as far as Easter celebration goes, we usually just do dinner with family." Adrian comments that the most important thing for he and his family is to give thanks for all of his blessings. "It's more of a family thing," he explains. Adrian tells me that while he doesn't have favorite memory of Easter, he did all of the same things that you and I do for Easter as a child. He did say that he enjoyed the egg hunts quite a bit.

Chrissi grins and asks, "Do you wish we could still do them?"

Adrian replies, "Yeah, I mean totally! It's funny you know because like a lot of people don't even do them anymore."

Chrissi agrees. "You know, I noticed that."

Adrian continues, "Yeah, not even children. I remember we used to go all out. We used to have the entire family - like 50 of us looking for eggs!" The eggs Adrian and his family searched for were extra special, not just being your average chocolate egg. They had prizes in them! He loved spending three hours looking for little painted eggs. We agreed that we can't do that very often when we get older. Shame! He does admit that although Easter is an important holiday, he would place Christmas above Easter. We agreed that we can still rip the packages open just as when we were little kids! We laughed that we both still do that."

Crystal Chappell (Olivia Spencer Lewis) called Soaps.com's Shannon Burrell ( Ugly Betty Editor) for an interview a few days ago and they got to talking about Easter weekend! Shannon asked, "Will you and your family be celebrating the upcoming Easter Holiday?"

Crystal happily replied, "Yes, I actually will be putting eggs together. The little plastic eggs with candy and whistles, and then we will do an Easter Egg Hunt on Sunday."

Soaps.com invites our readers to post a comment below to tell us how you plan on spending Easter? We hope you all have a happy and safe weekend!

It's not just your opinion!