From Diane B.: I am unhappy about killing Alan off. Also, Scotty Baldwin was a wanted man when he left Port Charles and now he is back and the law doesn't seem to care. Also, with Ric's past, he would never be D.A. or have gotten custody of Molly. Do you think your fans have short memories?

From Dottie H.: I have watched Guiding Light for over 30 years. I am now 70 yrs old. I get really upset when you skip around too much, and leave us hanging. We tend to forget who did what, and where the cast is going! PLEASE settle one problem before you start so many other problems. We tend to lose interest! I love the cast, but the story line is drifting in too many directions!!! Thank you!

From Daniel J.: I have been watching Guiding Light for a long time and its kind of getting boring. I got some ideas Let's bring some of the old unfinished storyline back and that will bring some people back that we use to love. I like the old rivals. Ok Joshua's old girlfriends Annie and Sonny, Eve. That's a storyline for the Lewis family. Let Alexandra find and marry Roger while Alan's in a coma. Let Selena come back for buzz. Lets spice it up a little

From Anita S.: I don't understand why they are letting the actor that plays Allen Michael go. You can always make up a story line between him and his father. Stop letting the good actors go. It is about time that Rick gets a good story line, hope it doesn't end fast like the other story lines did. Don't forget Reva, she is great.

From Sherry B.: Your soap has become very stupid that as of Friday, I am no longer a fan of the show. I have deleted all of the taping that was set for weeks to come, unless someone wakes up out of a bad dream and things are back to normal with Cris and Evangeline. I will never watch this show again. Todd is a pig and Evangeline deserves much better. Besides, why does she have to be Llanview's pass around girl, sleeping with ever man in Llanview?

From Anna M.: Your soap opera is full of garbage and junk plots. That's why your soap opera is bombing. Some of the stuff you got on thee is not real life. Spike and Jessica for one, Kay and Miguel and the way they got together. Come on now, magic. How Ethan got in bed with Theresa, magic. Come on with this magic, you guys need some more writers.

From Shirley J.: Enough is enough!! I'm so sick of the same story lines for Jessica/Spike, Luis/Sheridan, and Ethan/Theresa!! It's the same thing over and over - how many times does Jessica go home and Spike takes her back again to the streets! Geee!! I have watched your show since it began, and it's the same thing over and over - no changes! It's a shame, but I think this is why your show is being cancelled - try to spice it up a bit - change the story lines! With all this said, I do hope the show will continue, but maybe with a few changes, it will still air! Let's have a "happy ever after" couple - just one!!!

From Norma M.: Please tell the powers-that-be that it is past time for the almighty Phyllis to get her comeuppance. She nearly killed Christine & Paul and got off scott-free, but there are those who remember. Secondly, she is practically old enough to be Nick's mother...Let's stick with history of the show. Phyllis makes me ill with her holier than thou attitude and the way she invades other people's lives. And while you are at it, please get rid of Gloria, send her to prison...every time I think about how she caused the death of John Abbott, I just want to throw up. What a waste...I know Jack is not an angel but he genuinely loves his family. Bring back Ashley for family support...thanks for listening...

From Jannie H.: I will hate to see Dru leaving the show. In fact, she's one of the reasons I watch Y&R. The only thing I ask is do not re-cast her role. Nobody plays Dru better than Victoria Rowell.

What bugs you about your soaps? Contact Us! Let us know! 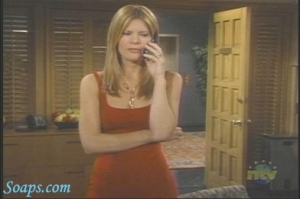 Credit: Are you one of the fans who is tired of Theresa and Ethan?

From Lois P.: I’ve been watching AMC since its beginning and am about to quit; the language is getting ugly and unacceptable. I’m very disappointed.

From Martha C.: I don’t know why people keep getting down on Josh. He is a refreshing figure with so much love for Babe something she hasn’t had with JR (THE Creep). Anyone would love to have someone like Josh to love them. JR should be Erica & Adam’s child. He is so much like them, controlling and full of hate! Neither of the three knows how to sincerely love someone. They just like to control. Don’t let Josh go, give him a good story line.

From Alice T.: I’ve watched this show for 45 years. Several friends have as well. ALL of us have become disgusted with the writing lately. Three of us haven’t watched it since mid Feb. as it became more like a horror show. Where is John Dixon, Dr. Ben and why do we rarely see Nancy Hughes or Lisa? They have killed the show, and that IS a crime.

From Michelle F.: Your story-lines are for the birds. For starters get rid of Rich, Brook, Stephanie etc., and their boring repetitious love triangles and same old carrying on. Start anew. You obviously have run out of ideas. You are losing your audience fast.

From Ginny L.: Please make Brooke a woman that makes it on her own. Why must she have a man? Give her some time off from men.

From Kathleen A.: please let Sammie finally get married. It gets boring with the same things happening to her.

From Jake R.: Get EJ and Sami together instead of Lumi and we’ll see the sparks fly! Why can’t you have a storyline in the works like this for someone as spicy as Sami. I hate that she always ends up with boring Lucas. EJ and Sami are two peas in a pod. Please get someone else to write dialogue for the show too. We hate seeing EJ call dudes sweetheart or sunshine. Come on! The guy is supposed to be evil. Evil guys don’t call each other sunshine!!

From Marie V.: I find that the storylines on GH are too long and drag out with little news about the situation from day to day. I am very disappointed that they killed off Alan Quartermaine and he had heart and most of the characters that are developed have no real human emotion or value. I say developed some good old story lines. Why don’t Luke and Laura get back on and start getting into some family dynamics with the Spenser’s and Nicholas. Skye and Luke had some chemistry. Why not fire up that relationship. I miss seeing Luke. Where are the good story lines? Who cares about Sam’s past, I don’t. 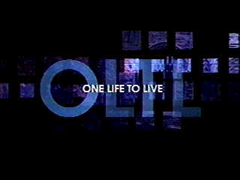 It's not just your opinion! 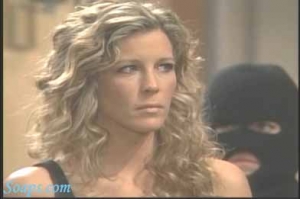