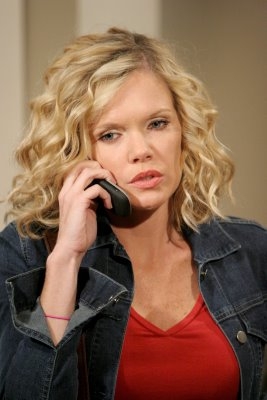 Soaps.com writers list off their thoughts for best and worst categories of 2009.

Most viewers found something to enjoy in the intense and emotional scenes surrounding the tornado storyline. This is the type of tale that resonates with soap opera viewers and was one of the few plots that a majority of viewers connected with this past year.

Stuart’s Murder. This storyline was all the more disappointing because it started out with great potential. However, it simply dragged on too long until the point where no one cared and things became downright tiresome and ridiculous. Main players such as Adam and Annie became people we didn’t understand, and the fallout also led to characters such as Zach, Kendall, and Aidan being written in such a way that we no longer recognized them – or wanted to know them!

Lesli Kay returning as Molly.
Watching Jon Lindstrom evolve his own fascinating and unique take on Craig.
Maura West’s performance in her alcoholism story.
To the surprise of many, hiring David Kreizman as Head Writer has actually given the show more continuity and strength over the past few months than it’s had for quite awhile.

Does it even need to be said? That the show has been cancelled.
Letting go of Austin Peck in a minor public scandal.
Although Lynn Herring (Audrey), Judi Evans (Maeve), Stuart Damon (Ralph) and Forbes March (Mason) are all good actors and soap vets, their storylines were largely disastrous.
The incredibly unbalanced writing and re-writing of Paul’s character and his relationships.

Bold and The Beautiful:

Rick and Steffy didn’t last as a couple and couples Jackie & Owen and Bill & Katie spiced things up.
Jackie M’s cast of misfits were a hoot while Donna overshadowing Pam on “The Price is Right” was good campy fun.
Stephanie grappled with, but eventually stood strong being on her own.
New faces Bill, Whip, Sandy, and Justin were added to the small cast.
Bill’s takeover of FC shook things up for the Forrester and Logan families.
Even though it didn’t have much impact on the canvas as a whole, Ann’s passing was moving with great performances by Susan Flannery (Stephanie), Betty White (Ann) and Alley Mills (Pam).

Rick acted like a spoiled brat for half the year while parents, tired Brooke/Ridge/Taylor triangle raged on.
More should have been done with Justin and Marcus being father and son, Justin’s lingering feelings for Donna, and really, Justin in general.
The lack of airtime for Felicia and Thorne.
Owen having a twin was lame and his baby fever was too much and not believable.
Still no gay man in sight on the show, making the fictional fashion houses the only ones in the world without gay men designing.

Day Of Our Lives:

Writing stepped up quite a bit half-way through the year, pushing the show up a few notches in the ratings.
Re-hiring Louise Sorell as Vivian Alamain.
Some of the best, most comical teams of 2009 included Stefano and Nicole’s banter, hilarious dialogue and moments from Vivian and Victor, and the new dynamic of Kate and Stefano as a couple.
Best acting on the show this year goes to Arianne Zuker.
Best newcomer of 2009 – Taylor Sprietler, playing Mia.

Firing Drake Hogestyn, Deidre Hall, Thaao Penghlis, Leann Hunley, Stephen Nichols and Mary Beth Evans, though was said to have helped the budget on the show, took a lot out of fans.
The disaster storyline that had Kate trying to murder Chloe.

Karaoke Night at Jake's was great fun every time.
The outdoor carnival set looked amazing and those scenes were fun to watch.
Dominic Zamprogna cast as Dante/Dominic was the best casting decision all year and the aging of Michael, Kristina, Morgan and Molly brought good stories and great young actors and Jonathan Jackson returned as Lucky.
The Spixie non-wedding was more fun and romantic than most real soap weddings.
Patrick and Robin overcame their problems with no one cheating (aside from Robin's kiss with Brad) or leaving the other.
Johnny and Olivia were a surprisingly hot couple and Jason and Sam's reunion was hot.
Jason's verbal smack down of Michael was well deserved and well executed.
James Franco's guest-starring stint brought a lot of mainstream attention to GH and his obvious 'soap opera' performance shined a light on what a great cast the show already had - without him.

Rick Hearst and Sarah Brown left, and Greg Vaughan was let go. Jason Cook continued to be wasted as Matt Hunter and Martha Byrne (ex-Andrea) was wasted in a half-hearted storyline that felt unfinished.
Kate was pushed aside and rarely seen.
Rebecca as Emily's long lost twin didn't work.
Too many dropped characters/storyline points: Winifred, Agent Raynor, the Cassadine/Spencer rivalry, the teen abuse storyline, Edward's girlfriend, Andrea and Ric's connection, etc.
Holly's return was a debacle and enraged long time fans with the reveal that Ethan was her and Luke's son. Ethan also hasn't had much to do since.
Using the same flashforward storytelling device for the biotoxin plot, as they used for the Metro Court Hostage Crisis and Black and White Ball, was unnecessary and annoying.

Mitch's return from the dead - and all the hell he brought with him.
Chloe having been revealed to be Starr and Cole's baby.
The drug issues, and ramifications of using, amongst the Llanview High students storyline.
Oliver Fish finally coming to terms with his sexuality.

The coupling of John McBain and Marty Saybrook.
Stacy Morasco trapping Rex into believing she was carrying his child - after she had miscarried and gotten herself pregnant again by Fish.
The firing of John Brotherton (Jared Banks).
Dorian's obnoxious plan to legalize same sex marriages.

The Young and The Restless:

The blockbuster drama of Mary Jane Benson actually being Patty Williams was extremely entertaining, and showcased some amazing acting! It also led us into the climax of the Newman/Abbott feud with the Colleen drowning and the return of Traci.
Viewers also loved the storyline that began 2009 - Katherine Chancellor was alive! It contained all of the elements that make a soap opera what it is - emotion/drama, intrigue, humor, and of course, romance. The best of it all was the relationship that developed between Katherine and Murphy!

There were two storylines this year that tanked - both for the same reasons - the stories were plot-driven, overly dark, dragged on too long, and seemed quite unbelievable. These were, of course, the Chipmunk story, and the tale of Adam driving Ashley crazy at the Ranch (which culminated in the baby switch). A handful of viewers really relish Adam, but overall, Y&R viewers seem to prefer a little more realism and character-driven drama in their afternoon soap.

For more Best and Worst of Y&R from 2009, follow this link to read what our friend, TV and radio's Shaun Proulx thought of Y&R in 2009.

General Hospital and One Life to...