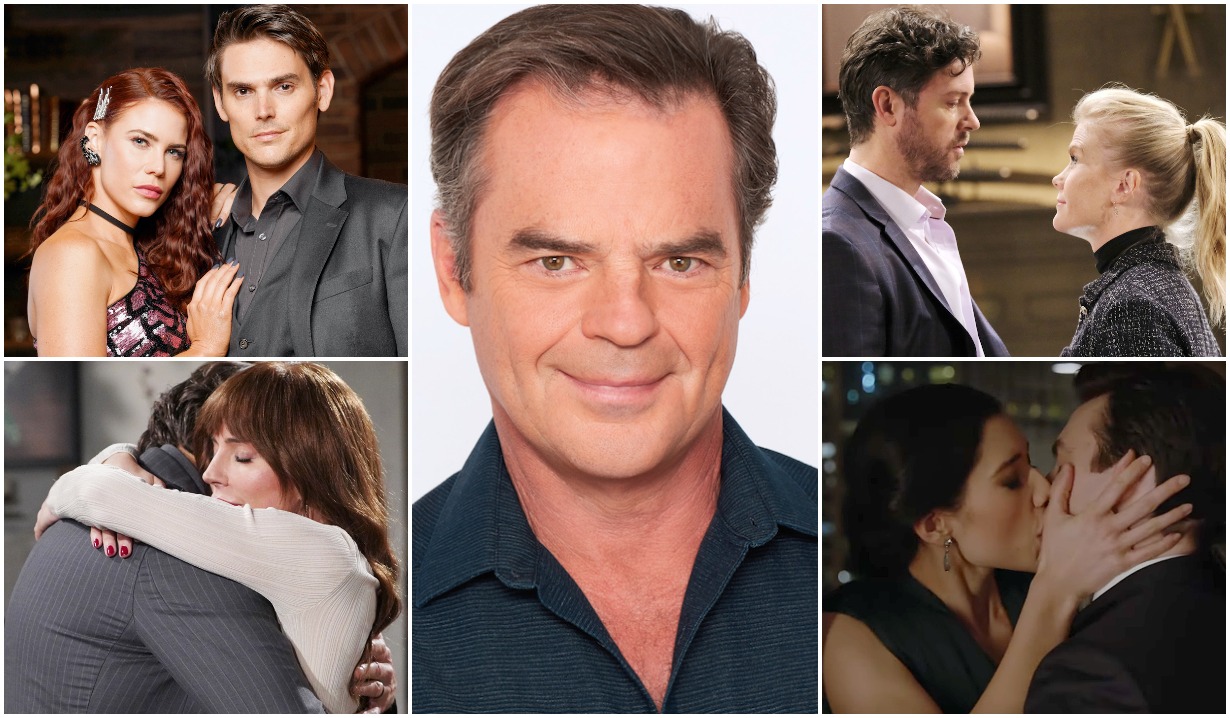 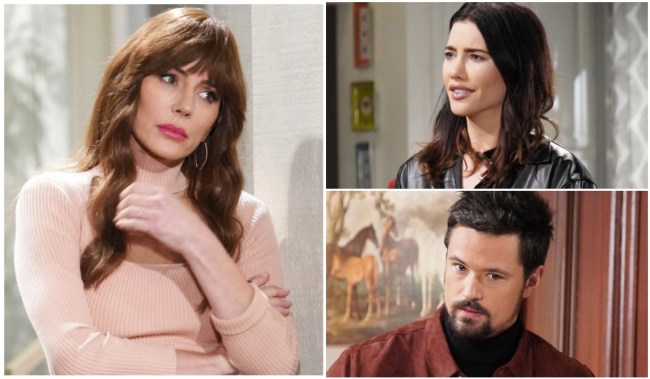 Taylor and Ridge have been on a collision course ever since the shrink first reappeared in Los Angeles. After what went down last week, a reunion between them looks more inevitable than ever — at least if Steffy and Thomas have anything to do with it!
Before reading this week’s Bold & Beautiful column, get a piece of paper and write down what you think are the most-repeated lines on the show. Then click here to see if your picks match ours!

What Went Down Last Week: Carter tried keeping Paris at arm’s length, but without much success. When the two were later making out at the office, her mother — who is very much #TeamZende — caught them in the act. Brooke tried to prevent Douglas from telling anyone that he’d seen her smooching with Santa. But by week’s end, the tot not only spilled the beans to Thomas, but remembered that it was Deacon, not Santa, he’d seen grandma kissing! 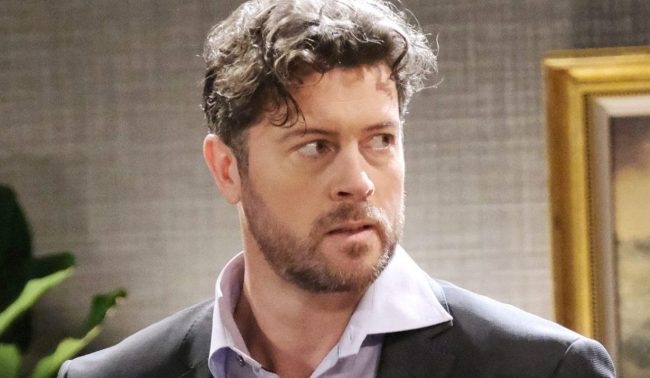 EJ’s about to get a blast from his past when the last person he’d want to see winds up too close for comfort. The only question now is whether he’ll survive the encounter and make things right with Sami — or hop into bed with someone completely new…
Craig and Nancy sparked some intense debate upon their return this week, but there’s another potential twist that could add to the drama. Plus, Lori’s wondering if Xander is playing the long game and if Ray will unite two powerhouses in this week’s Days of Our Lives column.
What Went Down Last Week: Johnny’s movie producer showed up in town… and turned out to be Paulina’s abusive ex (and Lani’s dad), TR. When Abigail figured out that Ava was beneath the Sarah mask, she and Gwen had Chad’s wife taken to a remote island. There, she was held at gunpoint by Kristen. Chad realized Abby wasn’t in Boston with her folks. Xander proposed to Gwen as it was revealed that Sarah is alive and on the same island as Abigail. 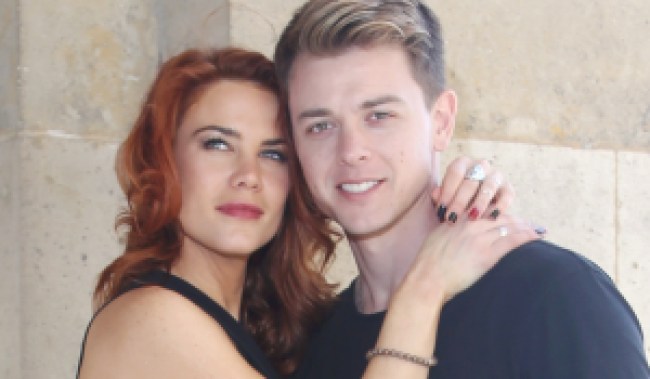 For the first time, Chad Duell (Michael) spoke out about his split from Young & Restless‘ Courtney Hope (Sally) during a sit-down with his TV-dad Maurice Benard (Sonny). What happened? Are they OK? Get the answers straight from the actor himself.

It was a busy week in Port Charles as the much-discussed ski trip finally got under way and, in an unexpected turn, Sonny went back on his meds. Still, he and Carly are far from settled, and Dustin had plenty more drama to discuss in this week’s General Hospital Soapbox.

What Went Down Last Week: As Sonny spiraled, Nina was there and helped get him back on his meds. The ski trip went off the rails after Esme slipped Trina a drug. Joss blasted Esme, who — before leaving with Spencer — planted a camera which recorded Cameron and his girlfriend making love for the first time. Victor told Peter the truth about his daughter. Valentin was close to figuring out the truth, so Victor kidnapped his own son! 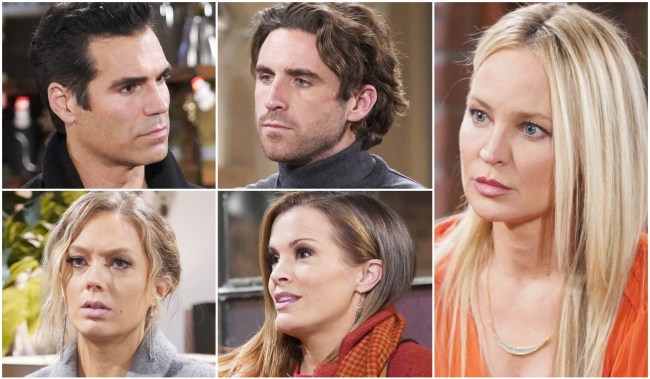 There’s been trouble in paradise for some time between Sharon and Rey — not to mention Chance and Abby. With both couples struggling, we found ourselves contemplating a shocking twist that could change everything.!

There’s no mincing of words in this week’s The Young and the Restless column as Candace examines the plot points that just don’t make any sense. From the Dominic mess to Adam’s backwards slide into incompetence, she doesn’t hold back.

What Went Down This Week: Chance and Abby agreed to share custody with a thrilled Devon. Adam was stunned when Victoria revealed she’d purchased Newman Media. Jack was unhappy when Phyllis revealed her plan to leave for Italy to consider a job offer there. Mariah and Tessa’s engagement left Noah drunk and moping over his ex. 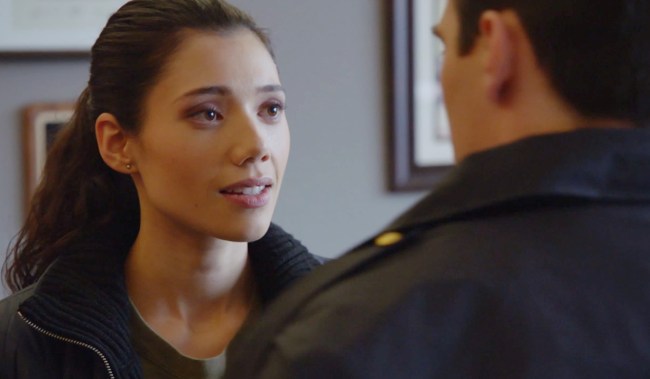 Finally, from Erica Kane to Sally Spectra, daytime has given us some of the most unforgettable characters of all time. So we, in turn, are giving you a gallery full of the larger-than-life characters who were unique in every way. 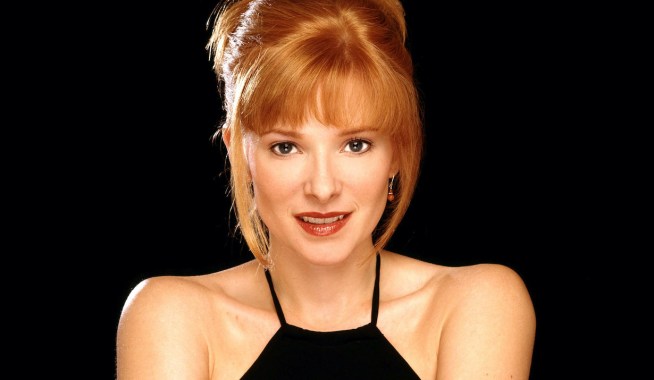 On the 15th Anniversary of One of Daytime's Most Bizarre Deaths, a Return to the Scene of the Crime — and the *Real* Motive for a Beloved Character's Murder: One of the Writers 'Wanted to Put Me in My Place'

Though The Resident’s Return Hints at Heartbreak Ahead for Several Chastain Docs, Conrad May Actually Be Getting Closer to Finding Love Again 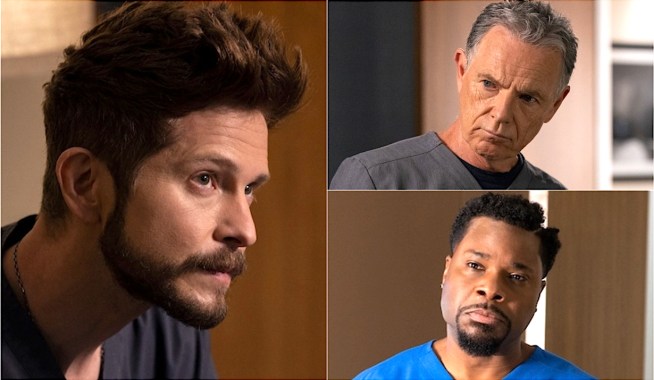