Soaps.com Survey: What’ll You Watch After As The World Turns Ends? 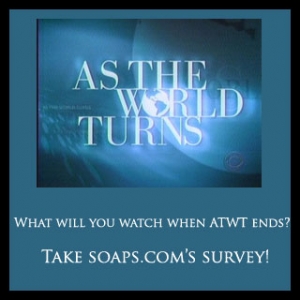 After being on the airwaves for almost fifty-four years, having debuted on April 2, 1956, it was just announced that As The World Turns Would Be Canceled in September 2010. Soaps.com is very saddened for the show, its cast and crew, for ourselves, and especially for the fans who have grown to love everything about Oakdale and it’s residents.

Nothing can ever replace the show and we know that, but we do want you to give it some thought and let us know what comes next for you? What soap operas do you already watch other than As The World Turns? Which other Daytime dramas do you think you might start watching to devote your downtime to? Is this it for you? Was ATWT the only show you ever cared for? Whatever it is you feel, we ask that you please take a moment to vote in our survey, which will run from December 8 2009 to February 28 2010. If you are unsure of which show to start watching next, we encourage fans to post their suggestions for you in the comment section below and to post in the message boards.

Vote in Soaps.com’s After As The World Turns survey now.

Feel free to join the many other fans to discuss this news in our As The World Turns Message Board, and just know, Soaps.com is every bit as saddened about this cancellation as you are.