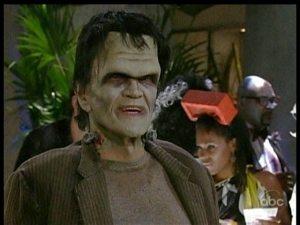 Last week, Soaps.com polled everyone on how our readers would dress up their favorite soap opera characters for our fictional Soaps.com Halloween Ball, and we are excited to reveal who’s coming to the ball, Saturday evening and what types of costumes you think they should be wearing!

When asked who would make the most horrid bloodsucking vampire, worse than Cruella de Ville, you voted:

3rd – All My Children’s David Hayward

Soap characters who will most likely arrive as the sweetest, loveliest angel costume, who could only be sent from heaven, include:

Every soap has one of these, and Mobster Al Capone had nothing on these mobster-like characters:

3rd – The Young and The Restless’s Victor Newman

There is a Bill Gates, Donald Trump or Oprah costume available to show how rich they are, and those adoring these costumes will include:

1st – The Young and The Restless’s Victor Newman

3rd – All My Children’s Adam Chandler and Days of our Lives’ Victor Kiriakis (tied!)

Who will be dressed sexier than Edward from “Twilight,” or Eric from “True Blood…”

On the darker side of the cloth, characters dressed like Frankenstein or an Ogre, like Shrek, will be:

1st - The Young and The Restless's Adam Newman

Not afraid to be labeled a jokester, wearing a dunce cap to represent themselves properly at our ball, are none other than:

2nd - All My Children's Ryan Lavery and The Young and The Restless's Amber Moore (tied!)

3rd - Maxie Jones and The Young and The Restless's Nick Newman (tied!)

You have to appreciate one who would dress as our local Daytime nerdy geek, such as:

2nd - All My Children's Petey Cortlandt

Afraid of their own shadow, dressed as Cowardly Lions will be:

3rd - The Young and The Restless's Jeff Bardwell

With any ball, there are always those unforgettable attendees, and like Michael Jackson in Thriller, the show or character may be gone, but we'll never forget these unforgettables:

3rd: Day of Our Lives' John Black and Marlena Evans-Black

Soaps.com wants to thank everyone who voted and for those who forgot or who were not aware of the survey, please feel free to make your own vote below! From all of us here at Soaps.com, we wish you all a safe and fun-filled Halloween!

Bold and The Beautiful and The Young...