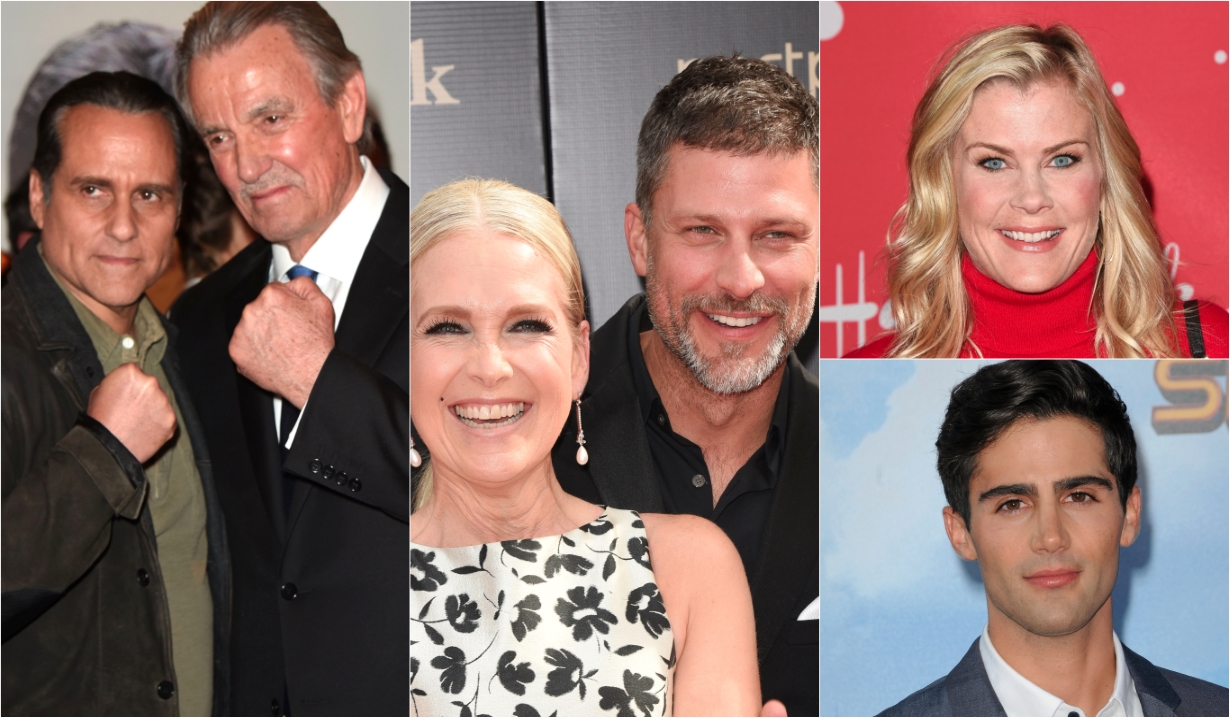 Don’t miss a soapy detail with all the latest news for The Bold and the Beautiful, Days of our Lives, General Hospital, and The Young and the Restless from September 21 – 25.

Catch a glimpse at how happy parents Darin Brooks (Wyatt) and Kelly Kruger (Mackenzie, Young and Restless) celebrated the first birthday of their daughter. Things are a whole lot less happy on the soap opera as Steffy’s friends and family gathered together to give her a much-needed intervention. We wonder where Taylor is when she’s needed the most, and it’s not just because of the state of her daughter. Find out why else she should be back in town before getting our thoughts on the story that should currently be in play but isn’t. Meanwhile, Thomas has been magically redeemed and we’re not buying it. But at least it looks like Liam will finally be getting what’s coming to him as he heads for a showdown over who should raise Kelly. Visit the Bold and the Beautiful news room to read all of that and then get Richard’s take on the missed opportunities in Steffy’s story, her giant leap into addiction, and his bewilderment at why Hope is so friendly with Thomas in the Bold and the Beautiful column.

Looking for the cure to an over-complicated life? Alison Sweeney (Sami) shares her remedy. Meanwhile, Melissa Reeves (Jennifer) shared her praise for her girls on National Daughters Day and her love for her new grandchild. Find out which Days alum has been struck with a mysterious fever before learning what Tamara Braun assumes will be torture as she returns to the role of Ava Vitali. Her character is not the only one who will be unleashing some shocks. Allie let out one of her own last week, but it was not quite as big as the one Gwen has and which is almost certain to destroy Chad and Abby. Could two Abbys be in the works? Now that Eric is leaving Salem, we look at what could be in store for former bad girl Nicole while Greg Vaughan (Eric) shares some of his greatest moments. Visit our Days of our Lives news room to get the rundown on the Hallmark Christmas movies that will feature current and former Days of our Lives actors. Finally, Richard weighs in on the mass exodus from Salem, Allie’s baby finally getting a name, and the inappropriate chemistry between Kayla and Tripp in his Days of our Lives column.

The latest news that Dante has received could radically alter his future in Port Charles. We look at how the return of Holly Sutton and Ethan Lovett are likely to shake things up now that they are back in the mix. Get our speculation on who is holding her hostage. We also examine why Mike’s death matters and what it could mean going forward. See how Maurice Benard (Sonny) said a tender farewell to his onscreen father, Max Gail. Also, find out what story proved to be too much for Benard and what advice Kelly Monaco (Sam) gave him that hit home. Plus, don’t miss the birthday message he sent to his wife. Now that it looks like Nelle is dead, we examine who could have really killed her. Learn what had Steve Burton (Jason) panicked about the demise of the Quartermaines and how he responded to rumors that he will be leaving the show. Nancy Lee Grahn (Alexis) offered some advice to women and to anyone unfortunate enough to be paired with her character in our exclusive interview. Ryan Paevey (ex-Nathan) had a lousy birthday. Get the scoop on how before discovering which former star of the series suffered a heartbreaking loss in our General Hospital news room. Plus, Dustin digs into the highs and lows of the week including Nelle’s dubious demise, the possible repercussions of the blackmail plot, and the danger ahead for Lulu in the new General Hospital column.

Max Ehrich’s (Fenmore) highly publicized romance to pop star Demi Lovato has come to an end. Try and guess which superstar Melody Thomas Scott (Nikki) offended so badly that they still haven’t forgiven her years later. Eric Braeden (Victor) tried to heal some wounds with his enemies by offering them a virtual hug. It doesn’t look like there will be a lot of healing in Genoa City though. Victor warns his daughter about Billy’s destructive hatred and the biggest twist in Amanda’s story could throw yet another wrench into things. We ponder what could happen now that Gloria is coming back. Hunter King (Summer) looks forward to what a pregnancy story will mean for her character and Kyle. It’s doubtful that it will mean anything good for Nick who continues to flip out about the couple. Watch Jason Thompson (Billy) being adorable as he gives his Emmy to his kids. Check out the romantic birthday message that Bryton James (Devon) sent to Brytni Sarpy (Elena) and see how happy Melissa Ordway (Abby) was to celebrate her eighth wedding anniversary. Finally, Camryn Grimes was on the defensive against some former fans. Get the details on that and more in our Young and the Restless news room. Finally, Candace is starting to appreciate the developing romantic quadrangle, enjoys Billy and Victoria plotting against Adam even if it’s lame, thinks the breast cancer story is fizzling, and ate up Nick’s family drama in her latest The Young and the Restless column.

Get the soap news, spoilers and interviews in your inbox daily with Soaps.com’s newsletter. And have a look through the gallery of daytime’s bromances.

Beloved All My Children Vet Marcy...