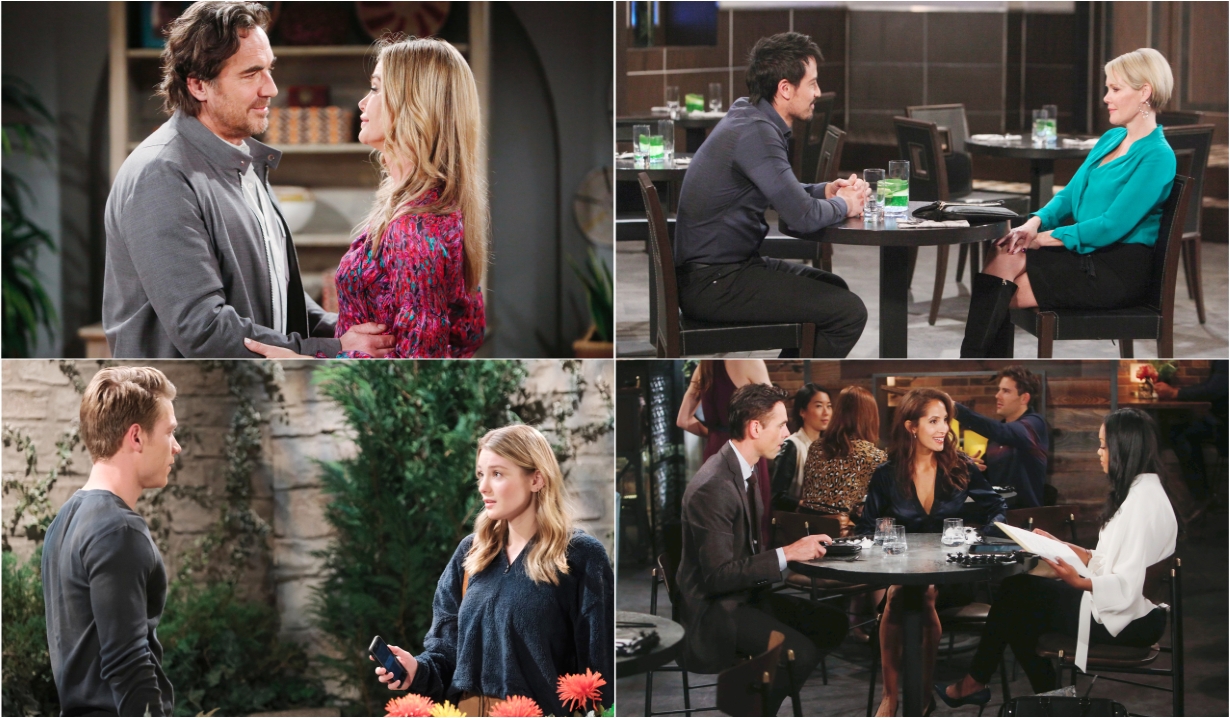 Find a flicker of fascinating possibilities for the week of September 28 – October 2 with spoilers for The Bold and the Beautiful, Days of our Lives, General Hospital, and The Young and the Restless, plus Days and GH spoilers from October 5 – 9.

Liam tells Finn about Steffy’s addiction since the doctor wasn’t catching on. Steffy’s erratic behavior is making it harder for everyone to ignore that there’s something seriously wrong with her. She still refuses to admit it, so Liam joins with Ridge and Finn to confront her and save her from her substance abuse. Thomas is finding all this hard to watch. Luckily for him, Hope offers him a shoulder to cry on. Although much of Ridge’s energy has been consumed by trying to deal with his daughter’s woes, that doesn’t stop Quinn from trying to push him to re-marry Shauna and keep Brooke at bay. The Logan is horrified when he informs her of his wedding plans. Eric is equally perplexed and appalled and tries to make his son see sense. That’s easier said than done and the day of the wedding winds up exploding in a way that no one is anticipating. Read the Bold and the Beautiful spoilers to find out who is rising to the top at Forrester Creations.

More: Look through our All My Children scrapbook

Settling down in Salem again continues to cause more problems than Philip was expecting. Even his welcome home dinner ends on an unappetizing note. While Belle is happy to try and help him in his hour of need, Jan is striding off to file complaints with Shawn. Things haven’t quite reached that level for Allie and Tripp, but they are a long way from pleasant. Allie admits to Nicole that she met up with Tripp in London. Pretty soon, Steve is wondering if his son is the father of Allie’s baby. Across town, Kristen is eager to go on the run and wants to drag Brady along with her. Before she can take off, she has a special request for Marlena. As the doctor ponders that, Ben and Hope manage to hunt down Vincent, but will it be too late? Read the Days of our Lives spoilers to discover who receives an offer from Kate.

Valentin has an unfortunate encounter that could have some repercussions. Meanwhile, Ned is there for Alexis as she continues coping with her condition. They start to get nostalgic about their past. Portia is not feeling very fuzzy about anything. In fact, she seems worried. However, Julian momentarily has the feeling that all his worries could be behind him. He’s brought down to earth when Sam shows up to lecture him. Across Port Charles, Joss prepares herself for Homecoming and her father does what he can to make sure that it is a special event. While he hosts his daughter and her friends for some photos to celebrate the milestone, Sonny gets an alarming call about Cyrus. Check out our General Hospital spoilers to find out who has a hard time facing the truth.

Even after all this time, Jack still has some pretty deep doubts about whether Kyle and Summer can really hack a relationship. Kyle goes off to try and heal the wounds with Lola while Ashley prods her brother to do a little moving of his own. Devon and Elena can hardly stop making moves on each other, but the mood could be killed when a medical crisis hits her where it hurts. As Phyllis helps Amanda put the pieces together, Lily learns the truth about the mysterious woman. She hardly has time to swallow that before she is stuck doing damage control with Billy when a scandal breaks out. Victor is trying to prevent another scandal in his family and has some harsh questions for his daughter. While Nick plots against Adam, Nikki tries to hatch a way to prevent everything from falling apart. Meanwhile, Sharon does what she can to protect Faith, but Rey’s attitude is not helping matters. Visit The Young and the Restless spoilers to learn who gets pushed too far.

Get the soap news, spoilers and interviews in your inbox daily with Soaps.com’s newsletter. And have a look through this gallery of soaps’ 20 sweetest real-life bromances.