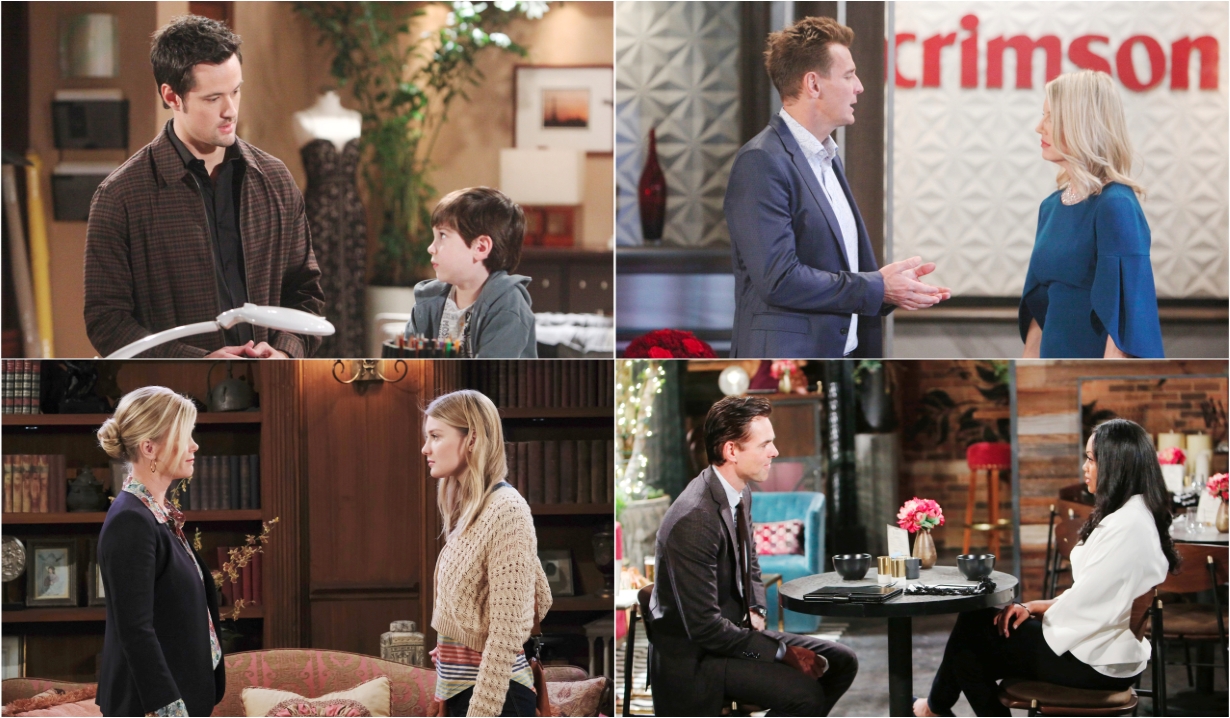 Looking for answers and seeking forgiveness.

Steffy continues to go off the deep end. She causes waves when she accuses Hope and Liam of kidnapping Kelly. After Liam catches her passing out and tries to confront her, he winds up being on the receiving end of her rage. This is finally enough to make him consider making some serious decisions about the future of his family. Meanwhile, Ridge is also worrying about the future of his after he has a talk with Thomas, who tells his father about Steffy’s recent pattern of disturbing behavior. While Ridge is trying to get to the bottom of his daughter’s problems, Thomas is seeking forgiveness for some of the grief he causes. He and Zoe have a serious heart to heart and try to move on. Read the Bold and the Beautiful spoilers to find out what happens between Thomas and Hope.

Sami may be leaving Salem this week, but it doesn’t look like she’s going without a fight. Allie has been outraged by her mother and tears into her for her betrayals. While Sami is licking her wounds, Eric is trying to dry Nicole’s tears as they say a sad goodbye. Before he can exit town, he has a conversation with his sister and Sami finally agrees to a compromise. That’s not enough to stop her from getting into another bitter argument with Nicole. Meanwhile, Brady manages to talk Victor into backing up his recent confession. But will that be enough to help? Kristen is going to need someone to give her a hand as her past comes back to bite her. Across Salem, John loses it with Steve and Justin can hardly believe his lips as Bonnie plants a kiss on them. Shawn may want to have his eyes tested after he catches Belle in Philip’s arms. And Xander tries to use his talents to manipulate Jan. Read the Days of our Lives spoilers to discover who is planning for the future.

Lulu and Liz think about the way that things used to be. Lulu then goes off to comfort Sonny. But who is she delivering a message from Cyrus to? Franco needs a favor from Nina. Whatever he’s asking for, it’s not helping in his problems with his wife. As the artist and Liz fight, Jax finds something to feel bad about. Curtis also isn’t feeling great and apologizes to Stella. She’s more concerned about TJ. Someone needs to be since Molly can’t shake all the guilt she feels for cheating on him. She spends the day with her mom, which is unlikely to make either of them feel better. When Valentin shows up to talk to her, Alexis is dismissive, but she may change her tune when she learns how he has been defending her. Cameron isn’t sure how he should be feeling and opens up to Joss about it. Julian remains desperate for help and tries to get it from Martin. Sasha is feeling no less desperate and Ned will be kicking himself after he blows his top and Brook Lynn is left vulnerable. Check out our General Hospital spoilers to learn who pays Carly a visit.

Elena’s concerns about Devon and Amanda are on the uptick. While Hilary may never be far from his mind, this is made worse by Amanda’s presence and obvious in Devon’s concern with honoring his deceased wife. As Elena is confiding her doubts about her relationship to Nate, Amanda is more distracted by who she is than how people in Genoa City feel about her. She gets help from Billy to dig up her true identity. But the Abbott should probably be watching his back since Chelsea and Adam are scheming to take him down. Even if he isn’t looking for it, Adam gets advice from his father on how to handle things. Meanwhile, Victoria is interrogating Chance about his history with Adam. Also looking for answers, Kyle and Summer meet in the park and propose to each other. They agree to keep this a secret. Visit The Young and the Restless spoilers to learn who stands up to Nikki.

Get the soap news, spoilers and interviews in your inbox daily with Soaps.com’s newsletter. And have a look through this gallery of why soap stars really left their shows.

Daytime Reels From the Death of...