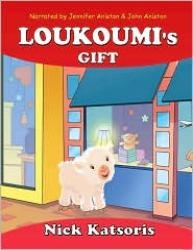 This past January, Soaps.com brought you news regarding author Nick Katsoris’s children’s novel, “Loukoumi’s Good Deeds,” and now we’re happy to announce that his latest creation, “Loukoumi’s Gift,” will be making its way to bookshelves on October 24!

Narrated by Days of Our Lives’ John Aniston (Victor Kiriakis) and his movie star daughter Jennifer Aniston (who will be the voice of Daisy), soap opera stars set to lend their voices for the audio version of the book include former Guiding Light actor Frank Dicopoulos (ex-Frank Cooper) and former The Bold and the Beautiful actor Constantine Maroulis (ex-Constantine Parros), along with celebrities Olympia Dukakis (“Search For Tomorrow’s” ex-Dr. Barbara Moreno), Gloria Gaynor and Alexis Christoforous.

Proceeds from the day of the release will benefit St. Jude Children’s Research Hospital, and a “Make A Difference with Loukoumi Day” event will also coincide, where thousands of children will be taking part in doing a good deed on that day. Other events planned for October 24 will include a special reading at St. Jude Children’s Hospital, with a book premier party at Barnes & Noble at Lincoln Center at 1972 Broadway in New York City, New York – so bring your kids out to participate in the many activities planned, which in turn will “Make A Difference!”

Not only is the main character of Nick’s book named Daisy, she’s named after the woman who Nick has dedicated “Loukoumi’s Gift” to – a cleaning woman named Daisy who, fifteen years ago, gave him a pair of gold cufflinks, claiming that Nick’s daily “Good Mornings” to her made a difference in her life.

Soaps.com wants to wish Nick and everyone involved in his latest project a wonderful release day! For more information on how you can take part in the event, please visit Loukoumi.

Soap Opera Stars On The Newlywed...