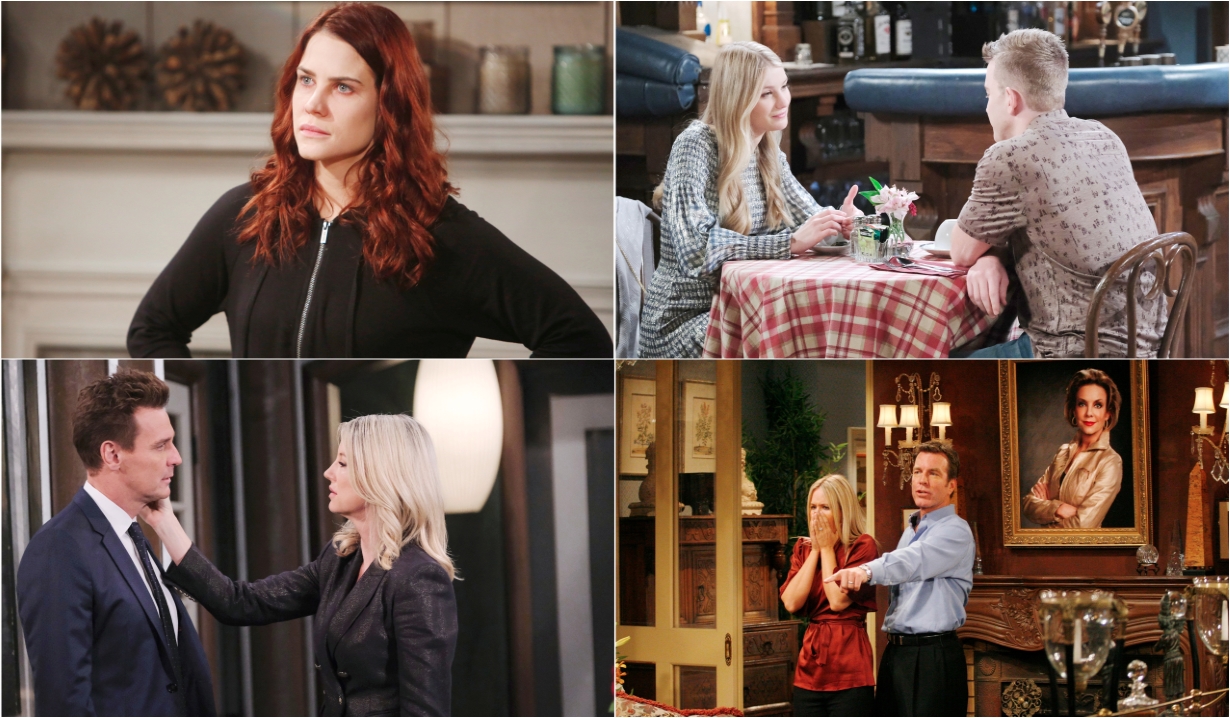 Family values, stunning behavior, and prepared for the worst.

It’s never a dull moment with these spoilers highlighting what’s ahead for the week of July 27 – 31 for The Bold and the Beautiful, Days of our Lives, General Hospital, and The Young and the Restless, plus Days and GH spoilers from August 3 – 7.

Fresh from Flo breaking the news to him that Sally has been lying about both her impending demise and plan to get pregnant by him without his permission, Wyatt tears into Sally. Things quickly take a grim turn. Sally begs for his forgiveness, but it soon appears as though she could have some real medical problems to face. Meanwhile, it looks like Steffy won’t be the only one to suffer for her recent injuries. Bill is questioned by Detective Sanchez while Ridge is by Steffy’s side as she wakes up in the hospital. The doctor breaks the news to her that the healing process is going to be a long one. Ridge is in a rage and blames all of this on Bill. Is he angry enough to put Bill in the hospital? Find out more by reading the Bold and the Beautiful spoilers.

Will and Sonny are in store for some good news. However, after Allie delivers it, there may be a problem. Nicole tells her all about Sami’s underhanded actions. Making things even worse, Nicole winds up being the one to help Allie give birth. Across Salem, Ciara can’t stop thinking about what has happened to Ben. As she’s telling Rafe her suspicions, Ben is trying to wrap his head around who has abducted him. He has an even harder time swallowing what they plan to do with him. And Chad learns that Gabi has been acting behind his back again and making power moves at DiMera Enterprises. That may not be much of a surprise, but Lucas gets one when Bonnie does something unexpected in bed. Read the Days of our Lives spoilers to discover who moves into the DiMera mansion.

ABC continues to remind you of what you’re missing as they offer an encore broadcast of episodes from May before new episodes commence for the week of August 3. Sonny gets a warning he doesn’t want from Jordan and immediately goes looking for answers. As he gets more paranoid, Diane is urging Michael to prepare for what might be the worse. She also has a meeting with Carly that is less than great in the optimism department. Carly races off to confront Chase about what he’s been doing. She soon finds her own credibility challenged and Michael’s isn’t far behind. Across Port Charles, Sasha is having a hard time thanks to Nina. Nelle continues to complicate things and makes a shocking announcement. She and Nina throw their support behind one another, which leaves Jax in a very awkward spot. And Anna can hardly focus because she’s got so much on her mind. While Molly has something to smile about, Valentin makes an announcement that isn’t likely to make many people happy. Check out our General Hospital spoilers to find out what Laura is so worried about.

CBS opens their vault again to air some classic episodes about Newman family values. Travel back to 1994 to watch as Victor tries to teach Nick what’s so important about the family legacy. Then watch as Nikki and Ashley are forced to face the truth about who is really Abby’s father. See the family come together to mourn the devastating loss of Cassie. And don’t miss Victor reuniting with his estranged father, Albert. But it’s not only the Newmans of course. Jack is battling with interloper Gloria over the future of the Abbott family. And the Winters family have more than enough problems of their own. Drucilla has to lean on Olivia when she has a medical emergency and Malcolm has some serious doubts about Lily’s relationship with Daniel. Visit The Young and the Restless spoilers to find out who was forced to come clean.

Oscar-Caliber Soap Stars Who Have...