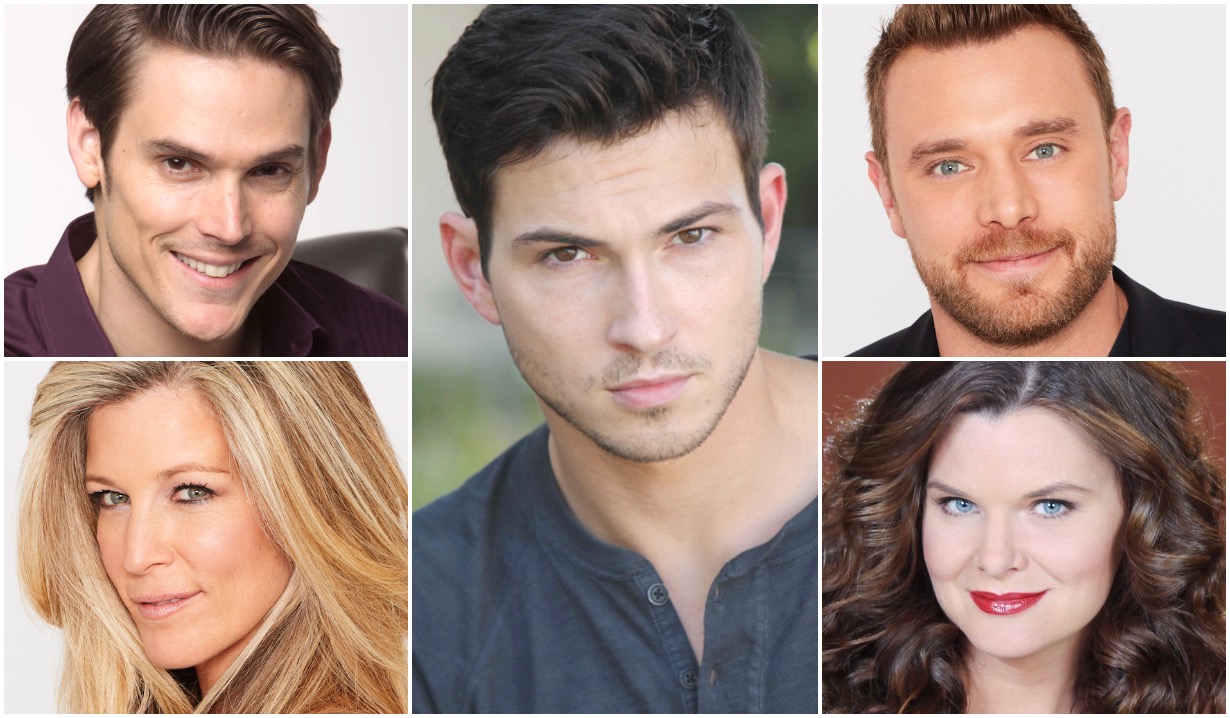 Getting it right once is hard; twice? Nearly impossible!

Today is a day that lives in infamy in the minds of diehard soap fans: It marks the anniversary of Victoria Wyndham’s 1972 debut as Rachel Davis on NBC’s still-much-missed Another World.

“What’s the big deal about that?” you ask. “She was Rachel — beginning, middle and end of story.” Oh no, dear readers, Wyndham wasn’t the only Rachel; she was but the character’s second, longest and final chapter. Ask your grandma. Before her, Robin Strasser (who’d go on to make One Life to Live’s Dorian Lord her signature role) had played the part of the upwardly-mobile schemer. And she’d been at least as popular a pot stirrer as, say, Michelle Stafford as The Young and the Restless’ Phyllis Summers or General Hospital’s Laura Wright as Carly Corinthos.

In other words, it was a big, big deal that Another World viewers not only accepted Wyndham as the vixen that they loved to hate but embraced her. In the decades that have followed, a choice few actors have pulled off the same sort of feat. Among them are a Days of our Lives heartthrob who was such a successful recast that he was ultimately given a new part of his own, a leading lady from The Young and the Restless who’s made us completely forget that anyone else walked a mile in her character’s stilettos, and a Casanova from The Bold and the Beautiful who’s given his alter ego a defining characteristic beyond the way he fills out a pair of Speedos.

Want to see who Soaps.com picked as daytime’s 20 best recasts ever? Just click on the photo gallery below, then hit the comments with your picks for the replacements to whom no one, even their predecessors, can hold a candle!

<p>Even now, Grossman strikes us as a smidgen youthful to be playing Victor Newman’s black-sheep son, Adam, on <em>The Young and the Restless</em>. Nonetheless, his charisma — <em>and</em> chemistry with leading ladies Melissa Claire Egan (Chelsea) and Sharon Case (Sharon) — have enticed us to accept him in the role played in bygone days by <em>This Is Us</em>’ Justin Hartley and <a href="https://soaps.sheknows.com/the-young-and-the-restless/news/572300/michael-muhney-demands-apology-tmz-young-restless-adam-newman/" target="_blank">headline-maker Michael Muhney</a>.</p>

<p>It’s a tall order, picking up where someone left off, especially when that someone is Emmy winner Michelle Stafford (Phyllis, <em>The Young and the Restless</em>). But Watros, an Emmy winner herself for her stellar work as Annie Dutton on <em>Guiding Light</em>, has pulled it off as <em>General Hospital</em>’s Nina Reeves. (If only Signy Coleman had managed to do the same when she took over for Watros on <em>Guiding Light</em> in 1998.)</p>

<p>All these years later, of course we know that <em>Days of our Lives</em>’ amnesiac John Black was never Roman Brady, as was initially believed. However, that doesn’t in the slightest diminish Hogestyn’s accomplishment, in making fans obsessed with Wayne Northrop as Marlena Evans’ one and only accept someone new in the role. Heck, even after Northrop was reintroduced in 1991 as the real Roman, he wound up being jettisoned in favor of Hogestyn, whoever it was he was playing!</p>

<p>We know. We know that Ellen Wheeler, who first played Vicky and Marley on <em>Another World</em>, eventually returned to play the good twin (leaving Jensen Buchanan to continue on as the more twisted sister). But that does a total of nothing to detract from the superlative work that Wheeler’s replacement, Anne Heche, did in the roles. She, like her predecessor, waltzed straight into the Daytime Emmys’ winner’s circle. Can Buchanan say that? Didn’t think so.</p>

<p>When the <em>Another World</em> alum (as Sam Fowler) joined <em>Days of our Lives</em> as Bo Brady, he famously <a href="https://soaps.sheknows.com/gallery/real-life-soap-scandals-photos/" target="_blank">failed to make a fan of leading lady</a> Lisa Rinna (ex-Billie). The rest of us, however, bought what he was selling in the role that Peter Reckell originated. In fact, after Kelker-Kelly’s first stint as Bo ended, he “negotiated a second contract,” he told <a href="https://www.welovesoaps.net/2013/09/robert-kelker-kelly-interview.html" target="_blank">We Love Soaps</a>, “and then that one fell apart” (paving the way for Reckell’s return).</p>

<p>The accent is an issue, it’s true. But you also can’t deny that when this soap-hopper (who’d previously played Patrick Thornhart on <em>One Life to Live</em>, Ian Thornhart on <em>Port Charles</em> and Zach Slater on <em>All My Children</em>) was tapped to succeed Ronn Moss as <em>The Bold and the Beautiful</em>’s Ridge Forrester in 2013, “the dressmaker” plumbed depths of emotion that had been previously out of reach.</p>

<p>The fact that you’re probably at this moment asking yourself, “Wait, why is Wally Kurth on this list?” is exactly the reason that he is. Before he assumed the role of <em>General Hospital</em>’s Ned Ashton in 1991, the part had been played — and to great success — by Kurt McKinney (who’s better known now as Matt Reardon on <em>Guiding Light</em>); in fact, it was McKinney’s Ned who embarked on that infamous, pseudo-incestuous affair with the strumpet played by the actress at No. 2!</p>

<p>So, um, adequate a Blair Cramer was Mia Korf for <em>One Life to Live</em> that when she was replaced after two years by Kassie DePaiva (then Kassie Wesley, a veteran of <em>Guiding Light</em> as Chelsea Reardon), the character’s Asian heritage was dispatched. Overnight, the schemer became, er, vaguely Southern — and also a hit. DePaiva held the role for the next 20 years.</p>

<p>Truth be told, we don’t consider Thomson, best known for his work as Adam Carrington on <em>Dynasty</em>, a replacement for Terry Lester, who played <em>Santa Barbara</em>’s Mason Capwell with a cheesy flair after Lane Davies called it a day. We consider the actor a recast of Davies, in that he brought to the role an altogether necessary wit and intelligence that, were the soap gods fair, would have him standing in the spotlight to this day.</p>

<p>Justin Gaston (aka the husband of <em>The Young and the Restless</em>’ Abby, Melissa Ordway) had only played <em>Days of our Lives</em>’ Ben Weston for a short time in 2014 before the NBC soap replaced him with Wilson. Which turned out to be a genius move. Even after the character was turned into a serial killer, the powers that be couldn’t get out of their heads his charismatic portrayer, so ultimately, he was brought back, Ben was cured, and we all delightedly descended into, um, “Cin.”</p>

<p>If you’re stepping into shoes left empty by Buffy the Freakin’ Vampire Slayer, you’d better be prepared to bring it. Luckily, Minshew was. Though the role of <em>All My Children</em>’s Kendall Hart was her big break, the relative newcomer managed to make the most of it, convincing us all to forget Sarah Michelle Gellar and invest wholeheartedly (or whatever comes after wholeheartedly) in the romance of Zendall — to the uninitiated, that’s Kendall and her true love, Zach Slater.</p>

<p>You can argue all you like that no way, no how was Miller’s Jake Doe in any way, shape or form <em>General Hospital</em>’s Jason Morgan (and, in fact, he turned out not to be Stone Cold but his heretofore-unknown twin brother, so you’d technically be right). However, the passionate fan base that remains committed to the connection that Drew Cain formed with Kelly Monaco’s Sam McCall would beg to differ, despite the rehiring of Steve Burton as the real McCoy, the preppy-turned-hitman that he’d played since 1991.</p>

<p>Are you surprised to see Evans on this list? <em>Long</em>-longtime viewers of <em>Days of our Lives</em> won’t be; they’ll remember that before she brought her, um, sweetness to the role of Steve Johnson’s better half, the part was played, and quite successfully, by Catherine Mary Stewart, whose version of Kayla was smitten with Chris Kositchek (to the point that she even lost her virginity to him!). Three years after Stewart split to do movies like <em>Weekend at Bernie’s</em>, <em>Rituals</em> vet Evans stepped in and laid claim to the plum part.</p>

<p>OK, this one’s a no-brainer. In the late 1980s, when <em>The Bold and the Beautiful</em> debuted, Katie Logan was a secondary character, the sort of (in her own mind!) Plain Jane whose dramas played out in the background of her gorgeous older sisters’ affairs. But when Nancy Sloan was finally replaced by Emmy winner Tom (previously Victoria Newman on <em>The Young and the Restless</em>), Katie moved front and center, shining as brightly as either of her blonde-bombshell siblings could’ve ever hoped to!</p>

<p>Somewhere, Erica Hope has kinda-sorta gotta be gnashing her teeth — because in 1979, grown-up child actress Scott left <em>The Waltons</em> — <em>The Waltons</em>, for John Boy’s sake! — to step into Hope’s former role of <em>The Young and the Restless</em>’ troubled Nikki Reed. Scott — then just plain ol’ Melody Thomas — had options, too; she reportedly joined the soap instead of signing with a sitcom pilot (which, as luck would have it, didn’t get picked up). The rest, as we well know, is history — more than 40 years of it at last count!</p>

<p>We don’t need to tell you what a hard act to follow is Robin Strasser (Dorian, <em>One Life to Live</em>). So it will come as no surprise that her original replacement as Rachel Davis on <em>Another World</em> was such a flop that the Daytime Emmy winner had to come back for a few months while the show <em>re</em>-recast. Thankfully, the powers that be discovered Wyndham — a veteran of <em>Guiding Light</em> as Charlotte Bauer — and once she took on the role in 1972, she made it so definitively her own that she played it until the NBC soap was cancelled in 1999.</p>

<p>You could have argued — and credibly — that after three-time Emmy winner Sarah Brown split from <em>General Hospital</em> and her role of Carly Roberts, no one could possibly hold a candle to her. But then Tamara Braun (who later played Kim Nero on the show) did just that, so brightly did she burn. And, ultimately, Wright, by then a veteran of <em>Loving</em>, <em>The City</em> and <em>Guiding Light</em>, did the unthinkable: put yet <em>another</em> unique stamp on the part. So, as she put it after signing a new contract in 2009, “you guys are <a href="https://www.soapcentral.com/gh/news/2009/1109-wright.php" target="_blank">stuck with me.</a>” And happily so!</p>

<p>If you <em>really</em> want to gauge how successful a recast this record-holding six-time Daytime Emmy winner was as <em>One Life to Live</em>’s embattled Viki Buchanan, all you have to do is ask yourself, “Hmm… who played the part before her?” No idea? Exactly! But the role of the sometime Niki Smith was actually originated by the well-liked Gillian Spencer (later Daisy Cortlandt on <em>All My Children</em>). When she left in 1970, someone no one remembers tried and failed to fit the bill before Slezak stepped in and brought Viki to life for the next four-plus decades.</p>

<p>When the soap vet, who’d already paid her dues on <em>A Flame in the Wind</em>, <em>As the World Turns</em> and <em>Love Is a Many Splendored Thing</em>, was tapped to play <em>General Hospital</em>’s Dr. Monica Webber, “I walked into something that I would never want to do again — replacing Patsy Rahn, who played [the character] before me and was rudely let go,” she told <a href="https://www.soapoperadigest.com/content/tbt-leslie-charleson-3/" target="_blank"><em>Soap Opera Digest</em></a> in 1981. “It was done in a very tactless way.” Nonetheless, Charleson rose to the challenge and has become one of the longest-serving actors in daytime history.</p>

<p>When in 1989 the late Terry Lester not only left behind <em>The Young and the Restless</em> but Jack Abbott, the popular playboy he’d portrayed for almost a decade, the soap worked itself into a real lather trying to find a suitable substitute. Thankfully, Bergman had just been canned by <em>All My Children</em>, where he’d played Dr. Cliff Warner for two decades. “I think <a href="https://www.tvinsider.com/834711/peter-bergman-young-and-the-restless-jack-abbott-30th-anniversary/" target="_blank">my firing was on the cover</a> of every soap magazine,” he told TV Insider in 2019. “Melody [Thomas Scott, Nikki] had one with her and said, ‘<em>That’s</em> Jack Abbott.’ Isn’t that just crazy?” Mm-hmm. Crazy-<em>brilliant</em>!</p>

Posted 55 seconds ago
Back to Top
ad