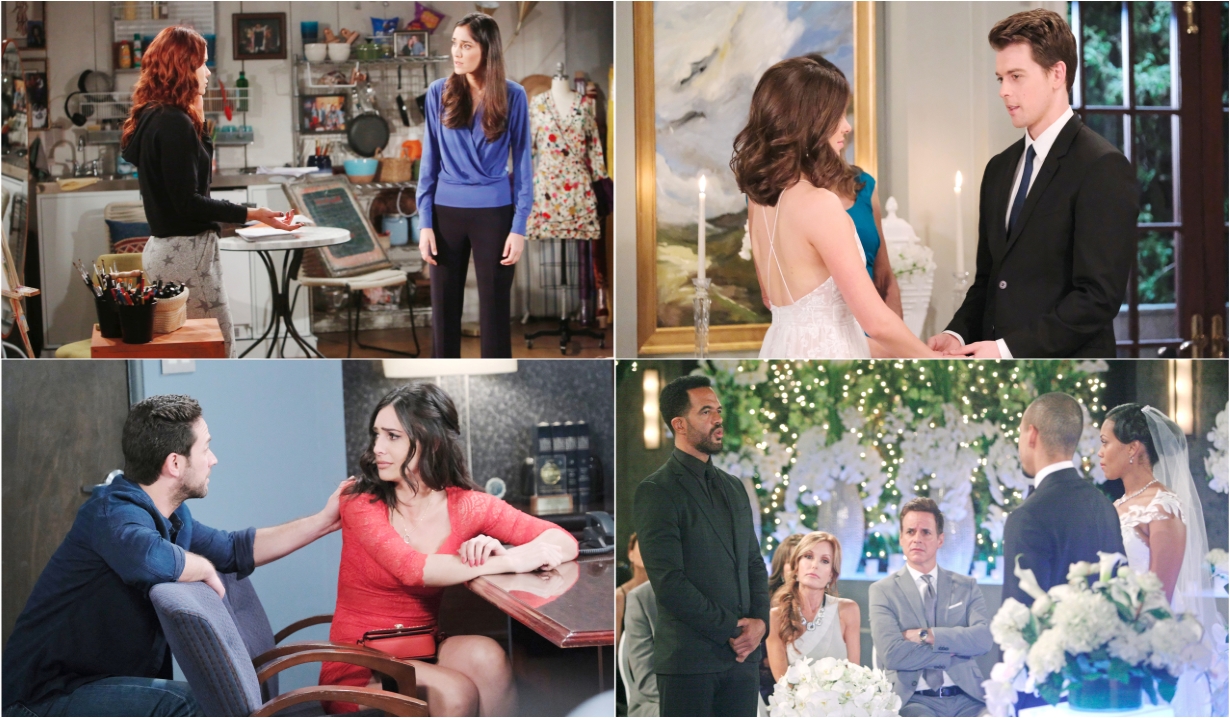 Back on the air, back to the beginning, and backed into a corner.

Wet your appetite for what’s in store as we bring you spoilers for the week of July 20 – 24 for The Bold and the Beautiful, Days of our Lives, General Hospital, and The Young and the Restless, plus Days spoilers from July 27 – 31.

Bold and Beautiful is returning with all-new episodes. If you can’t remember what’s been going on, you’re in luck. Carter is back and getting an update from Katie about Quinn ruining Brooke and Ridge’s party as well as everything going south for Thomas and Sally’s supposedly dire condition. Meanwhile, Sally and Dr. Escobar haul away an unconscious Flo. When she wakes up, she’s less shocked about being kidnapped than she is by what Sally has planned next. As Wyatt is freaking out about Flo going missing, Bill is begging Katie to forgive him again and promises to do whatever it takes so he won’t lose her. Unfortunately, he’s in such a rush to make things up to her, that he runs over Steffy. She’s taken to the hospital, but it’s more than just medical care that she’ll be getting from her new doctor. Find out more by reading the Bold and the Beautiful spoilers.

The week gets off to a bad start when people are looped into attending a funeral that they didn’t see coming. If emotions weren’t already frayed thanks to the cavalcade of weddings that have been coming fast and furious, the funeral sends things into overdrive. Belle and Shawn are eager to get the truth out of Claire, but that seems unlikely. Across Salem, all the turmoil is giving Ben bad dreams about his sister. With Jordan haunting him, he still walks down the aisle to Ciara, but things don’t end the way they were expecting. Xander of all people rushes into the chaos to save people. Sarah can’t help but be impressed. All the upset is enough to finally prompt Rafe to make up his mind about Allie’s offer. But that might change after Sami and Lucas rush to the hospital to see her. Read the Days of our Lives spoilers to discover who gets some tragic news.

ABC continues to remind you of what you’re missing as they offer an encore broadcast of episodes from May. Sonny remains desperate about the fate of a family member. He’s not the only one. Olivia is beside herself with her worries about Dante. Meanwhile, Nelle asks Nina for a big favor, and if she doesn’t get one from her, she soon discovers that she can get it elsewhere. As Nelle digs up the dirt that could save her, Brook Lynn manages to sink herself deeper into trouble and looks to Dustin for help. Across Port Charles, Michael and Willow are eager to put their hurt feelings aside and do what they can for Wiley. His family is more than willing to support him as Willow makes up her mind about the next step. Check out our General Hospital spoilers to find out who gets rejected.

More: Has Sami gone too far?

Young and Restless dips far into their vaults this week, in fact as far as they can go as they air the premiere episodes of the soap from the 1970s. Watch as mysterious Brad Elliott arrives in Genoa City and the Brooks and Foster family are introduced for the first time. Leap ahead a decade and watch what happened when the results of Katherine’s facelift were revealed just as Cricket began her modeling career. A decade later, Michael was plotting revenge while Neil and Drew’s family and friends drew together to celebrate their wedding day. Then see Neil twenty years later, when he’s become a different man and is trying to heal the wounds he’s caused in his rift with Hilary and Devon. Visit The Young and the Restless spoilers to find out which celebrity made a special appearance.

If you’re in the mood to take in a photo gallery, take a look at the one below, reminding you of the 20 former real-life soap couples that we bet you forgot by now!