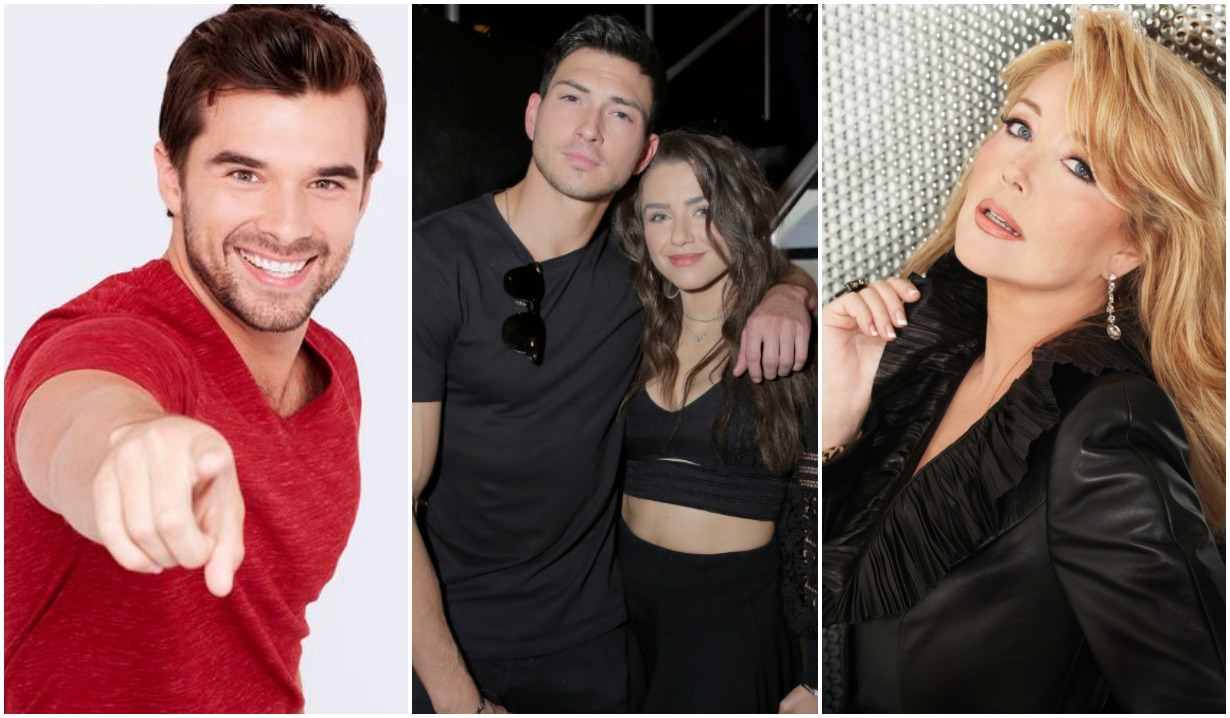 What can we say? Between them is an animal attraction.

Daytime fans are used to the fur flying — but not like this! In a series of photo-filled Instragram posts, cast members of The Young and the Restless, The Bold and the Beautiful, General Hospital and Days of our Lives cuddle up with their cats and dogs, and we aren’t just here for it, we’re here for it like a pet at dinnertime!

Below, at least until the pictures reduce you to a puddle of mush, you’ll see everyone from Y&R icon Melody Thomas Scott (Nikki) to B&B sweetheart Scott Clifton (Liam), from Days hottie Robert Scott Wilson (Ben) to GH tough guy William deVry (Julian), introducing you to the four-legged loves of their lives.

Do you think you can handle the cuteness of it all? OK then; brace yourselves and read on…

Puppy Love
From the looks of it, every afternoon is a dog-day afternoon for Josh Swickard. The GH leading man, who plays Chase, revealed during a free-wheeling Facebook Live chat that his fur babies are named Papageno and Pamina after characters in Mozart’s The Magic Flute (non-soap) opera.

Morning snuggles with the lil lamb

Small Wonder
We know — the abs are distracting. But if you look long and hard enough, you’ll notice that below is not only Days’ eye-catching Robert Scott Wilson (Ben) but his chihuahua, Lola. Not to be confused with his on-screen fiancée’s fur baby, who just happens to have the same name…

continued quarantine vibes ⚡️ -time is only dead if you kill it.🔋

Drink the mix… don’t get caught up in it.

A ‘Little’ Feisty
Technically, Victoria Konefal (Ciara, Days) has a miniature Schnauzer. But her Lola “acts like a goat most of the time,” the actress told K9 Magazine. “It’s in the way she hops. She’s barely even a dog, she’s more like a puppy, bunny, goat, deer angel hybrid.”

Whatever Lola wants, Lola gets 🐾

A Real Cat Purr-son
Though Scott Clifton leaves the catfights at B&B, where he plays Liam, he doesn’t always leave the cats: In 2014, he adopted Walter White, who appeared in the show’s pet-rescue storyline. His household now includes two more feline family members, Amy and Bill, the latter named after on-screen dad Don Diamont’s character.

Everything the light touches…

Day at the spa. #walter

A 10 Among Canines
Even without the visual aid, we’d probably have guessed that Y&R’s Eileen Davidson (Ashley) always feels like she’s on top of the world when she’s hanging with her dog, Charlotte, who’s rumored to occasionally have come home from the groomer as her evil twin, Carlotta.

GRATITUDE!!! Happy eve of the eve of Christmas Eve! AND Happy Hanukkah!!!

Charlotte went to the groomer today and came out as her evil twin “Carlotta”. #stilllovehertho #bestdogever #cujo

A post shared by Eileen Davidson (@eileendavidsonofficial) on Oct 2, 2019 at 6:41pm PDT

Her Majesty
Last National Cat Day, Y&R legend Melody Thomas Scott (Nikki) helped Crumbs & Whiskers Kitten and Cat Café improve the here and meow for some snuggly characters by saving them from euthanasia and getting them adopted. She also rescued her own “princess,” Reilly, “the most loyal, loving dog” she’s ever had.

Happy #nationaldogday to my princess, Reilly! Rescued from #southcentralanimalshelter 4 years ago. Close to death, skin and bones, she is now in perfect health and the most loyal, loving dog I've ever had. A one man dog, I am proud to be her man! #everydayisdogday #adoptdontshop #unconditionallove #rescue #theyremember #ilovemydog #lifeisbetterwithadog #mixedterrier #mixedterriersofinstagram #doglover #dogsofinstagram #instagraMELable

A Prince Among (Leading) Men
They say that after a while, you start to resemble your pet — and, tongue-in-cheek caption aside, Ronn Moss, aka the original Ridge on B&B, seems determined to prove that it’s true via this totes-adorbs selfie with his Chorkie (part chihuahua, part Yorkshire terrier), Prince.

A sweet surprise was delivered to us today from our dear friend @kirareedlorsch to @devindevasquez and I and we love our new cozy stay at home robes. We love and appreciate your thoughtfulness Kira and will be using these a lot. . . .#ronnmoss #devindevasquez #cozyvibes #cozyrobe #giftsforhim #gifts #lifestyle #lifeisbeautiful

Meow Hear This
Clearly, somebody besides us considers GH alum Matt Cohen (ex-Griffin) the cat’s meow: Pete, the preposterously sweet — and vocal — kitten with whom the fan favorite has been melting hearts on Instagram.

#Pete My 5am morning bonding time. Working on the “parrot/cat on the shoulder technique.🖤

The More, the Hairier
Animal House isn’t just a movie, it turns out. It’s also the home of Y&R Emmy winner Christian Jules LeBlanc (Michael), who cohabits with a feline family member and a coupla dogs whose sweet faces couldn’t keep them out of the hot seat after they treated Angelina Ballerina like a chew toy.

While you’re here, why not check out the gallery below — it’s full of photos of Days’ stars and the partners with whom they form real-life supercouples!