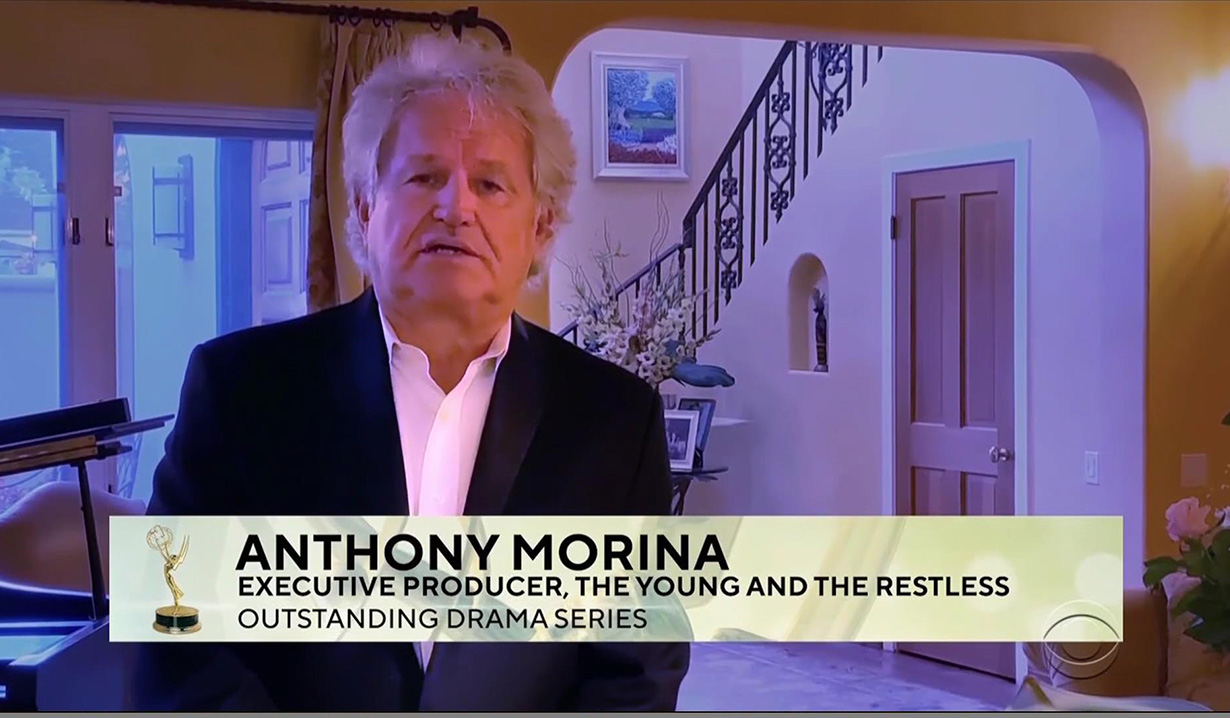 Celebrating the first time the Daytime Emmys has been televised in 5 years.

Soaps.com is live-blogging the 2020 Annual Daytime Emmys this evening. We’re wearing ball gowns, tiaras, and mixing margaritas, preparing for the show. While we wait, for those who haven’t already heard, we’ve got the winners for the 14th Annual Sudzies posted. There were, as always, a few surprises. These were based on the Daytime Emmys nominations, which gave soap fans a chance to vote on who they really felt were deserving of the awards tonight. Plus, we had a little fun with it and asked for who the most annoying characters were, the hottest, the most exciting – even the most boring couple.

Tonight’s festivities were pre-recorded and hosted by the hosts from The Talk, Sharon Osbourne, Sheryl Underwood, Eve, Carrie Ann Inaba, and Marie Osmond. There were many recognizable faces presenting tonight, including a few soap stars past and present, and a few hosts from other daytime television shows. Even the Cookie Monster made an appearance. He’s still as adorable as he was when we watched as a kid. The show itself was very different. Because of that, we’re doing things a little differently with the blog – only really focusing on the soaps and including some highlights of the show since most will be watching.

Soap fans begged for the Daytime Emmys to be televised once again. Now that we were treated to the awards show returning to television, we’re hoping this isn’t a one-off and that NATAS will be able to bring them back next year. Well, to be honest, I don’t mind if they’re televised or streamed, but I did enjoy the lack of technical issues that we usually see while watching a stream. Soaps.com’s Dustin Cushman urged soap fans to watch tonight’s festivities, explaining how important it is for the future of soaps. For those who missed out, it’ll be on Demand.

Sharon Osbourne revealed the Daytime Emmy reels for Outstanding Performances by a Supporting Actress in a drama series, and General Hospital’s Tamara Braun (Kim) won. The actress thanked “the kind ones at General Hospital” and dedicated her award to those suffering from racial injustice. 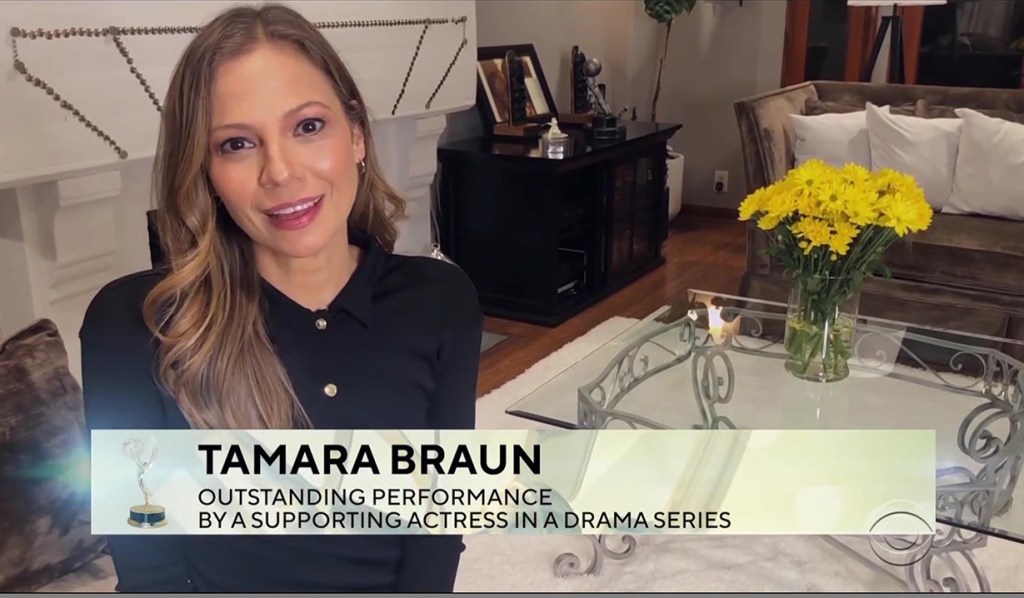 Young and the Restless’ Melody Thomas Scott (Nikki) presented for the outstanding performances by a supporting actor in a drama series and Bryton James (Devon) won. He thanked his parents, those who voted, CBS, his Young and the Restless family, and Brytni Sarpy, his co-star and girlfriend. He dedicated his award to the legend, Kristoff St. John (Neil Winters) who passed away. He also hoped that people would educate themselves on Black Lives Matter so they could empathize. 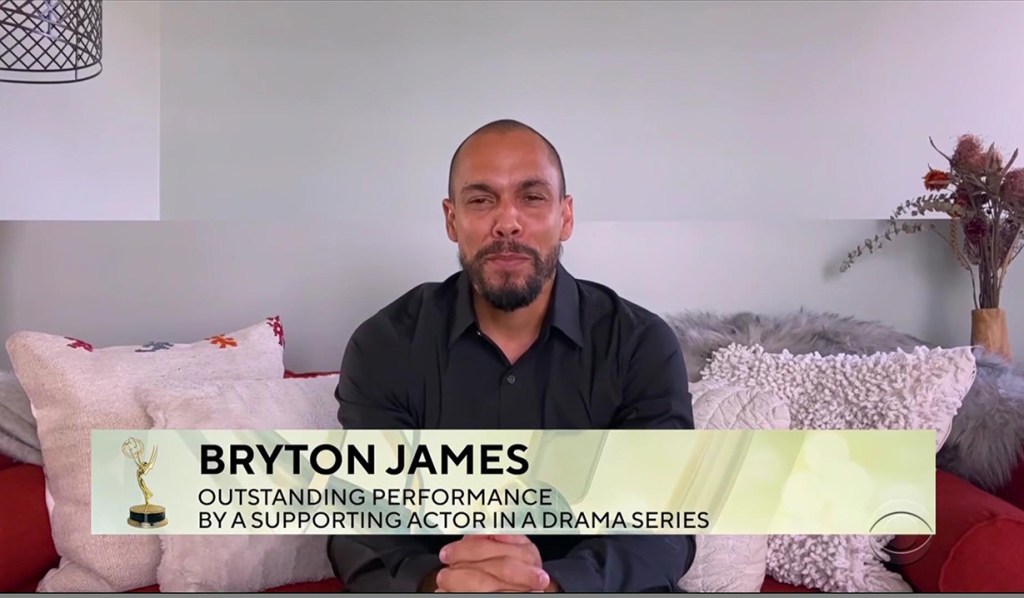 There was a beautiful Dick Clark tribute with classic scenes from American Bandstand which had the crowd going wild and Dick Clark dissolving into happy tears.

Jeopardy won an award for Outstanding Game Show and Harry Friedman, the Executive Producer, accepted the award and dedicated it to Alex Trebek, “a man of dignity.”

Younger Performer in a Daytime Drama award went to Days of our Lives’ Olivia Rose Keegan (Claire). She was with family and friends, accepting her award outside, while they all passed around a banner reminding her she has 40 seconds to finish up! 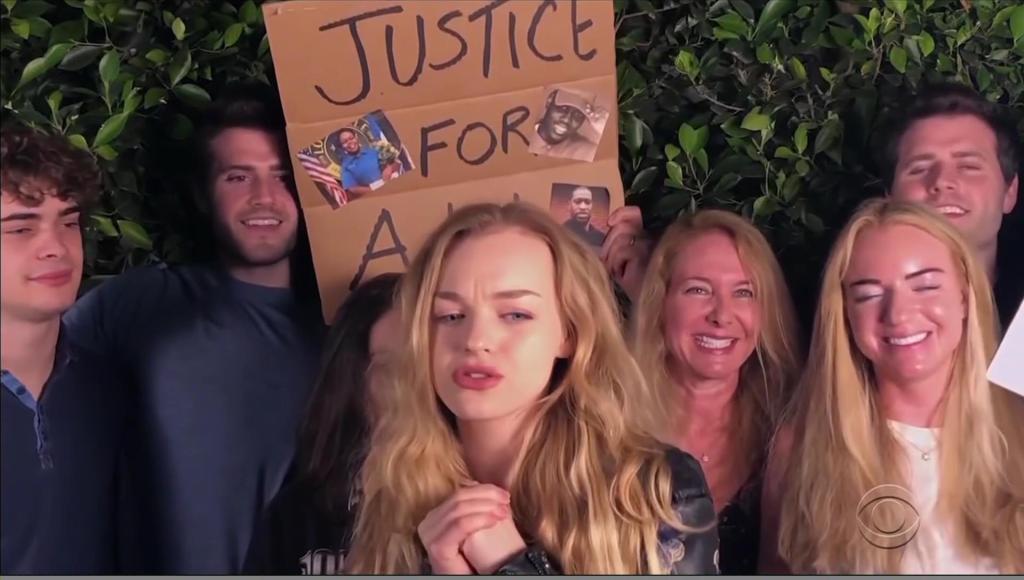 The Ellen Degeneres Show won for Outstanding Entertainment Talk Show.  She thanked her bartender, Larry. Behind her was a mop with Andy’s face on it. Hilarious!

Legendary singer/songwriter Aretha Franklin was a Young and Restless superfan who loved Victor Newman. Eric Braeden remembers the clip from 1997 where she spoke about it. He recalls that after seeing that clip, he felt that learning all of the pages of dialogue was worth it since an icon was watching their show. 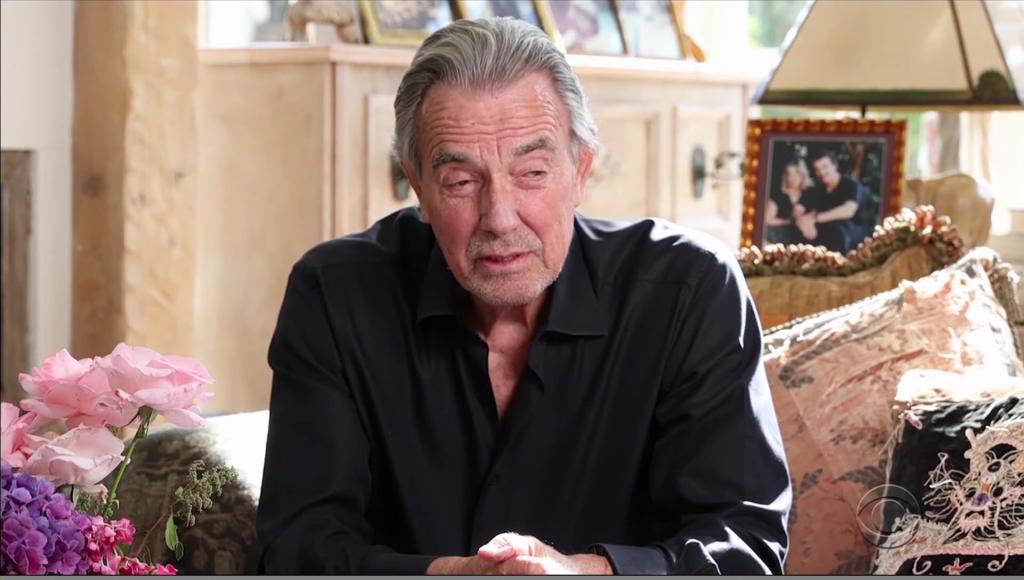 The Today Show wins for Outstanding Morning Show. They’ve been on the air for 68 years and felt proud.

There was an anniversary tribute to Sesame Street. They’ve been around 33 years. It was loaded with 2004 performances from various celebrities, notably for us – Drake Hogestyn (John, Days of our Lives). 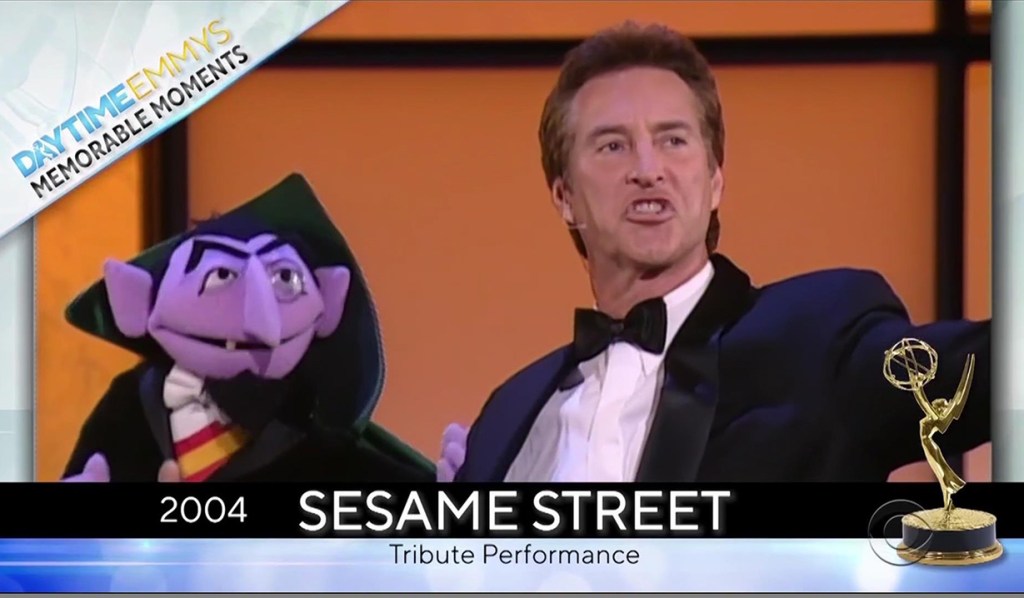 They talked about the Black Lives Matter movement and hoped it would last. Various hosts asked people to take the opportunity to be committed to change, to unlearn wrong ways of thinking, to listen and learn from different voices.

Outstanding Directing Team for a Drama Series winner went to General Hospital. Director, Phideaux Xavier accepted the award and thanked ABC and Disney for their support, the writers, cast and crew “whose artistry never lets us down.” He also thanked Frank Valentini, Executive Producer. 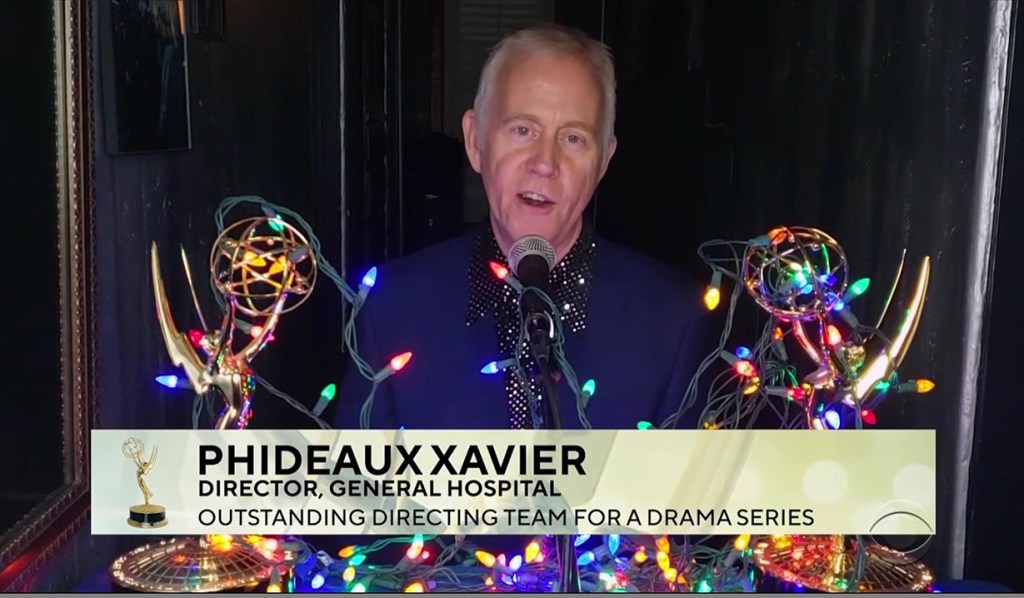 Outstanding Game Show Host award went to Alex Trebeck. He was shocked but called it a welcome shock and thanked the academy for voting for him.

Glorious Betty White (Ann, Bold and the Beautiful) won a Lifetime Achievement award in 2015. I met her while doing interviews on the red carpet for the Daytime Emmys in 2007. Other than Y&R’s Jeanne Cooper, Betty White was the only other actress I’d been star-struck with. She was adorable. This is part of our conversation…

Soaps.com: Didn’t I read somewhere where your housekeeper thought you’d finally made it since you were on a soap opera?
Betty: Oh, my housekeeper. (Laughter) I’ve been in the business for 58 years and I’ve had 14 situation comedies, a couple of them big hits. A lot of stuff I’ve done and my housekeeper said yeah that’s fine, that’s nice and I told her, “Oh, I’m gonna do a Bold and The Beautiful? YOU’RE GOING TO DO A BOLD AND THE BEAUTIFUL?” (Laughter) Well, I suddenly became a star in my home.

Outstanding Digital Drama Series award went to The Bay The Series. Kristos Andrews and Gregori Martin, Executive Producers accepted the award with many thanks to the cast and crew and their “genuine dedication to the show.”

James Reynolds (Abe, Days of our Lives) spoke about Al Freeman, Jr. who was the first to win a Daytime Emmy in 1979. He was on One Life to Live as Captain Ed Hall. 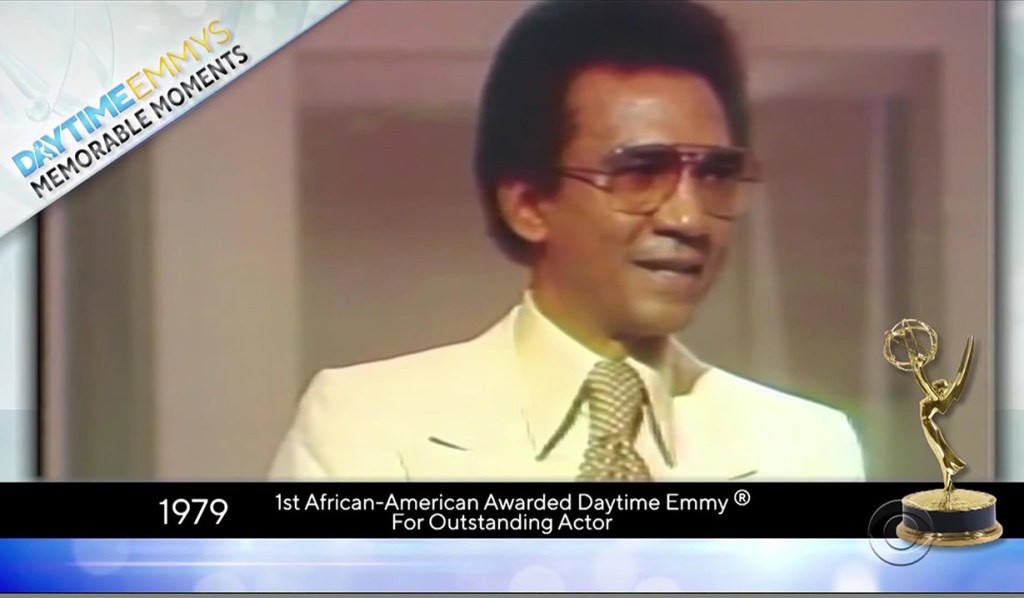 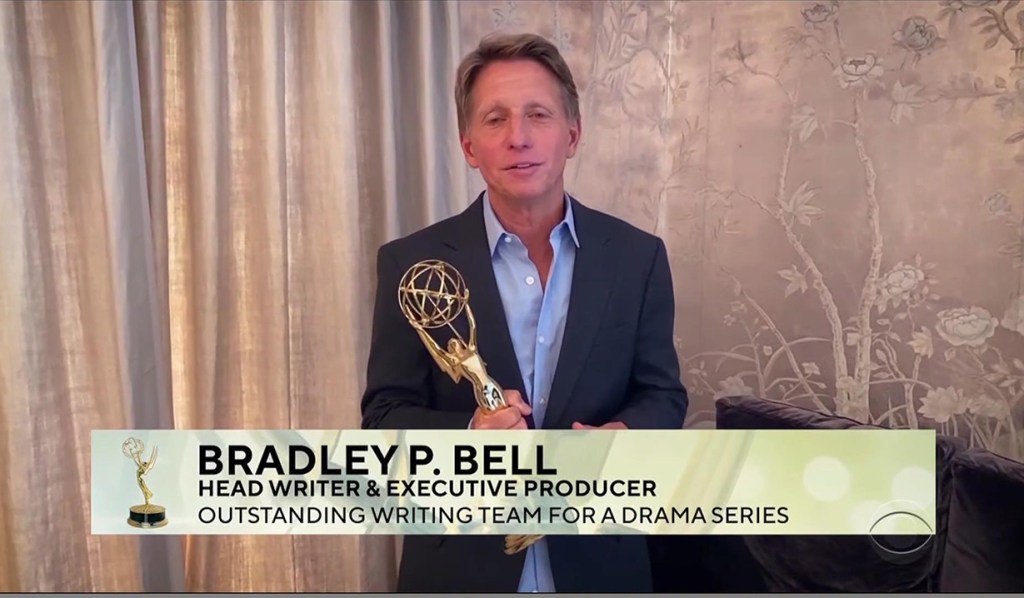 Before the next actors received their awards, we flashed back to 1999 when All My Children’s Susan Lucci (Erica) finally received her Daytime Emmy and sobbed happy tears, remembering she was “only supposed to be on every other Tuesday.”

Bold and Beautiful’s Jacqueline MacInnes Wood (Steffy) and General Hospital’s Maurice Benard presented for the Lead Actor in an Outstanding Drama Series. Who won? Jason Thompson, Billy, from Young and the Restless. He thanked Sonny, and his Y&R family and told his fans how much they mean to him. He dedicated his award to his family and expressed his support to the Black Lives Matters moment. 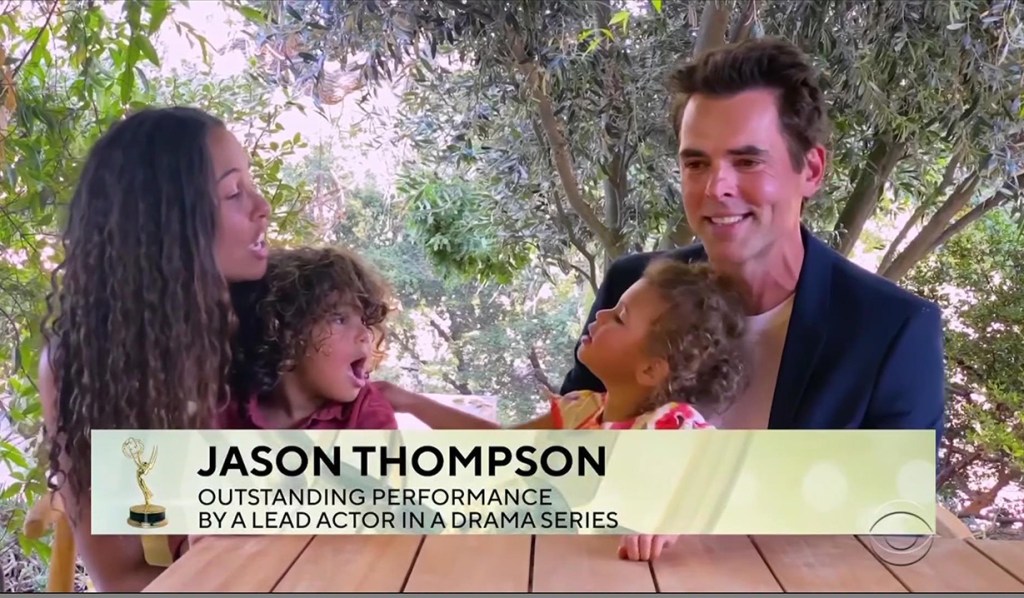 Kelsey Grammar (Fraiser) presented for Lead Actress in an Outstanding Drama Series. The award went to Heather Tom (Katie) from Bold and Beautiful. The actress thanked cast, crew and the support of the fans. 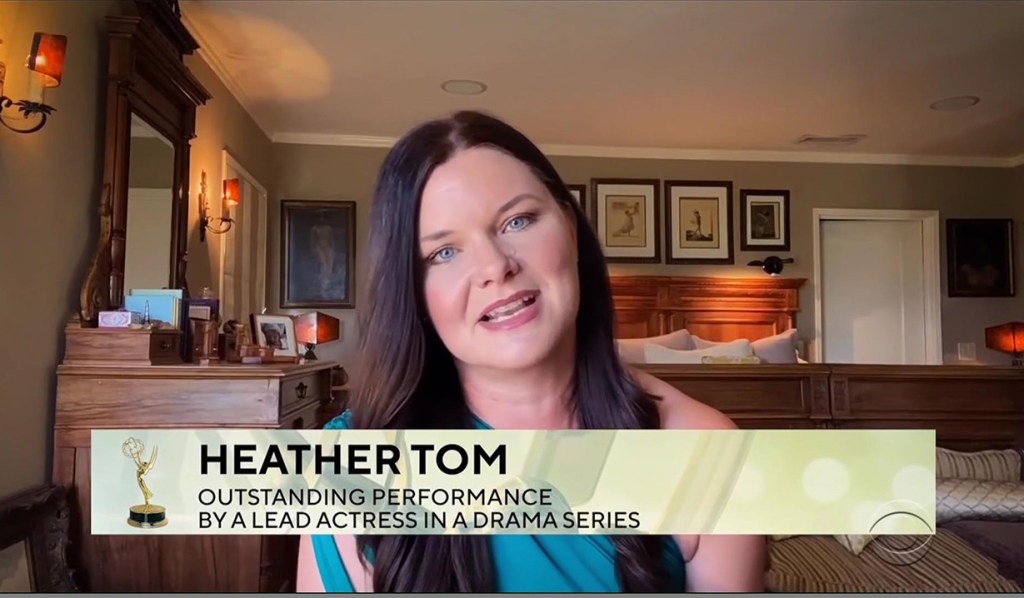 We were reminded of the Mr. Rogers Lifetime Achievement award from 1997. I admit it. I teared up. After the tribute, Kelly Ripa (Hayley, All My Children) and Ryan Seacrest, hosts of Kelly and Ryan, presented for Outstanding Drama Series, the last award of the evening. Young and the Restless won. For their tribute to Kristoff St. John. Executive Producer Anthony Morina accepted the award and called it bittersweet.

Read the full list of Daytime Emmy winners for 2020 and feel free to check out the gallery of winners. Congratulations to all! 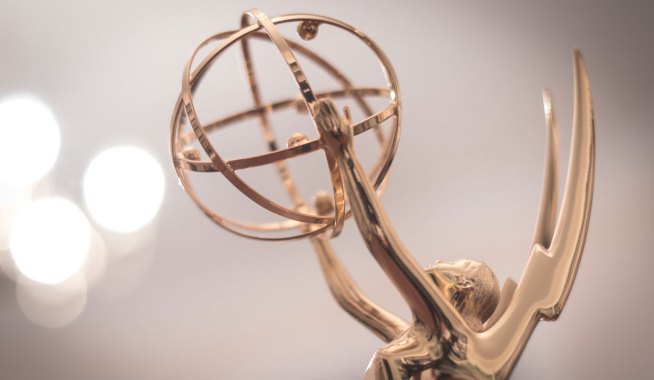 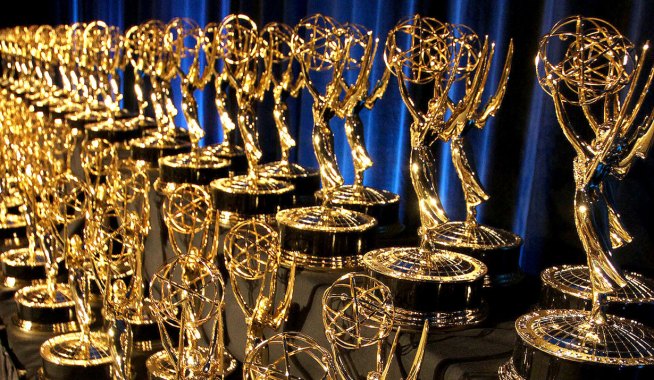