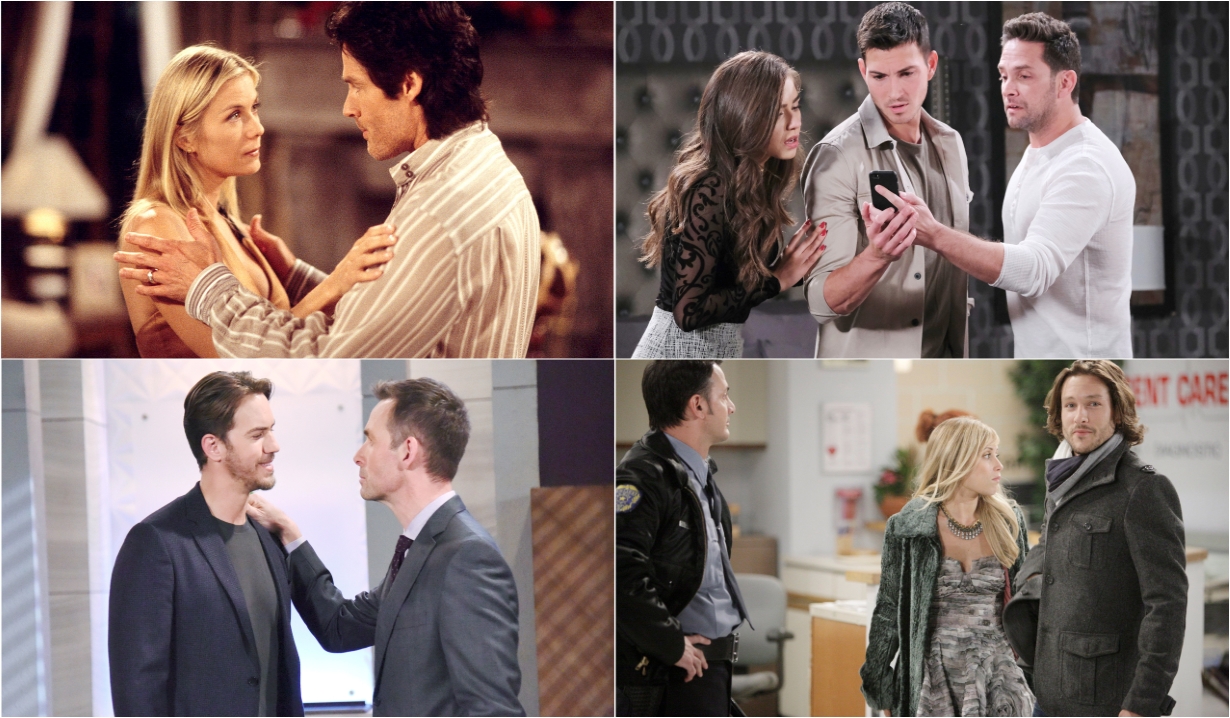 Get a taste of what’s on offer as we bring you spoilers for the week of June 8 – 12 for The Bold and the Beautiful, Days of our Lives, General Hospital, and The Young and the Restless, plus Days spoilers from June 15 – 19.

Go back to the beginning as CBS airs the premiere episode of Bold and Beautiful. Get reintroduced to some of your favorite characters new and old. Then catapult ahead to 2003 as Eric and Ridge battle it out with their runway designs. See Stephanie drown her sorrows with Sally Spectra as Brooke remarries Ridge once again. Then witness Brooke seriously mess things up when she attends a masquerade ball and accidentally winds up locking hips with Hope’s boyfriend. And something considerably more terrifying happens to Wyatt when he discovers that Quinn has abducted his brother and is living with him as her husband. Read Bold and the Beautiful spoilers to find out what Bill was doing while his son was trying to “find himself.”

Still confused about what he should do, Xander decides that Jack is the right person to give him advice about Sarah. Belle and Shawn arrive in Salem, unsure about how to deal with the Claire situation. As they are pondering that pickle, Ben, Jake and Ciara are eager to track down Claire’s new friend Gwen. Claire herself is pretty eagerly awaiting Ben and Ciara’s wedding to kick off so she can spring into action. If Ben didn’t already have that to be stressed out about, Will and Sonny keep pressuring him and Jake for details about Gabi vanishing. Across town, Eric and Nicole are shocked when Allie suddenly shows up with a special request. And Hope does what he can to help Rafe cope as he deals with a major loss. Read Days of our Lives spoilers to discover who has disturbing news for Kate.

It’s a week of scheming, pleading and enticements as episodes for May of 2018 and 2019 are aired to highlight some relationships at the breaking point or taking a new turn. While Peter is shown trying to solidify his relationship with Maxie, his plans keep facing complications. As usual, Anna is anxious about him and confused about what’s going on. From one year to the next, Ava goes from seducing Griffin to facing doom. Sam is also in a panic thanks to Shiloh and calls out for help, without a whole lot of support from Kristina. And see a few highlights from the beginning of Joss’ relationship with Oscar and after it’s all over. Read our General Hospital spoilers to find out who is misunderstood.

It’s a week of whirlwind romances and worries as CBS airs episodes spanning from 1986 to 2012. See some current characters played by different actors and a few special appearances, including Days of our Lives’ Susan Seaforth Hayes. Watch Victor seduce Ashley while Nikki is swept off her feet by Matt. See Nick take Sharon on an island retreat and Michael propose to Lauren. And catch Lily and Cane taking their family to France for their second wedding. But it will also be a week of episodes full of heartache as Sharon and Nick wait for news about Cassie and Nikki worries about Victoria’s future with Billy. Visit The Young and the Restless spoilers to see who Daniel ended up spending New Year’s with.

‘Mrs. Doubtfire’ Broadway Review: What A Drag It Is When A Premise Gets Old