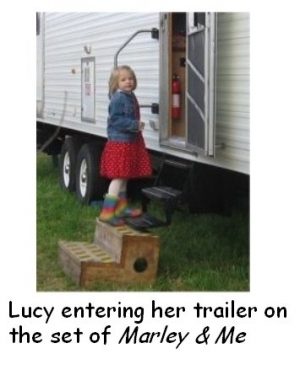 Carol asks: Did Emma (Ryan’s daughter) have a part in Marley & Me movie?

Kendra C. asks: Can you please tell me why Damian calls Lily ”Cara.” Thank you!

Soaps.com: “Cara” is an Italian term of endearment meaning ‘dear one’ or ‘beloved’.

Robin B. asks: I have yet to figure out what happened to the Rick and Steffy romance over the summer. I went back to work in August, 2009 and could never figure out if and why they broke up.

Soaps.com: Well, Robin, it was a pretty nasty mess. Ridge ended up taping Rick during one of his antagonizing rants about how Rick was ‘taking care’ of Ridge’s daughter, basically using Steffy to make Ridge furious. Ridge played the tape for Steffy, and after a brief break-up they tried to work things out but the relationship ended up going by the wayside. You can read the recap from when it all began to come to an end in our Bold and the Beautiful Update Archives. You can also read what happened in each episode, to Steffy, by reading her own daily updates archive.

Diane F. asks: Didn't Days have a girl named April on in 1989-1990-1991 because I named my daughter after her. She was a Spanish woman, very pretty, any help would be great. Her part didn't last that long.

Soaps.com: You're right! Canadian actress, Lisa Howard, played April Ramírez from 1988 to 1991. She has been in several movies since. If you'd like, you can read more about Lisa, on wikipedia.

Dani C. asks: Hi. Could you please tell me the name of the actor who portrays Kiefer on the show, and also how old is he? Thanks.

Soaps.com: Evangeline (Renee Elise Goldsberry) sang on the show many times, but actually it was Marcie McBain (Kathy Brier) who sang "Borrowed Angels" at Jennifer's funeral. You can watch a video of the scene on our Soaps.com You Tube page.

Karen H. asks: I Have heard that Eric Braeden has passed away. Is this true?

Soaps.com: Though Eric's character, Victor, had a life-threatening close call in Genoa City recently, the actor himself is alive and well. You may have been misinformed given the current state of Eric's contract and can read more about that in our Young and the Restless News Room.

Do you have a Daytime soap question that's been eating away at you? If so, ask away! Please drop us an email today!