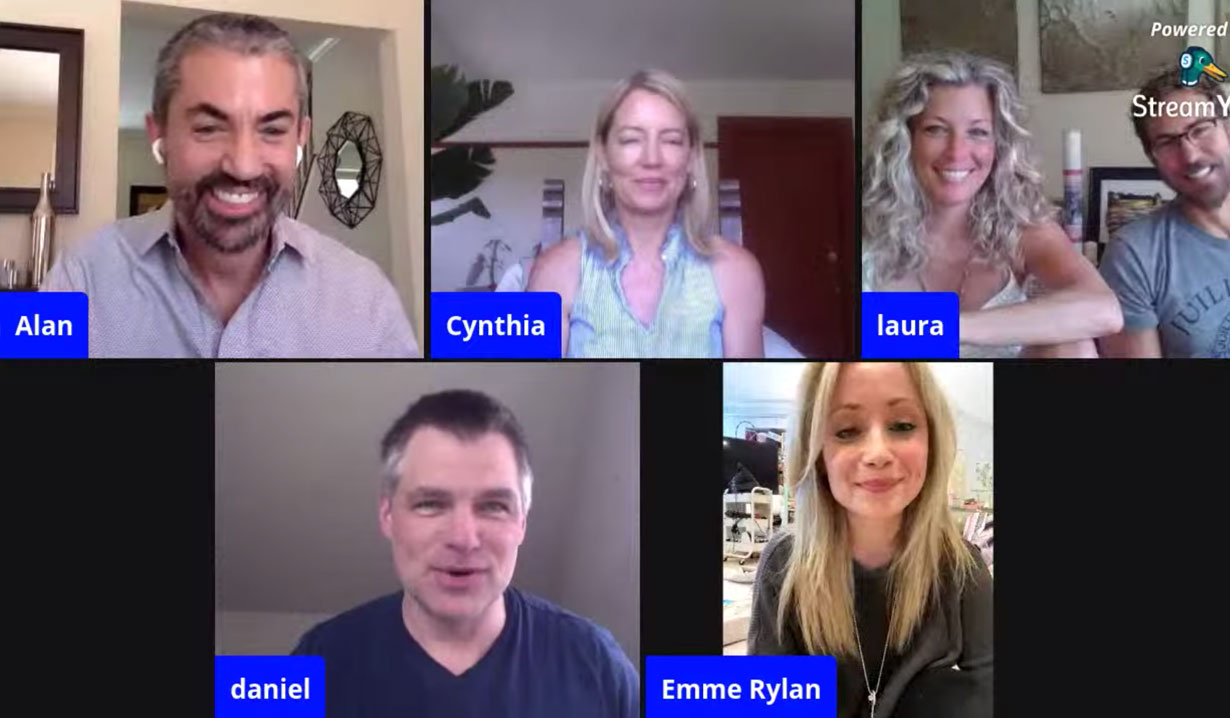 Former soap opera publicist Alan Locher has been reuniting cast members from As the World Turns and Guiding Light online. Yesterday was the third online Guiding Light reunion. On Wednesday, April 22 he hosted the forth. In attendance were Laura Wright (ex-Cassie Layne, and Carly Corinthos on General Hospital), Cynthia Watros (ex-Annie Dutton, also Kelly Andrews on Young and the Restless and Nina Reeves on General Hospital), Wes Ramsey (ex-Sam Spencer, also Owen on Days of our Lives and Peter August on General Hospital), Daniel Cosgrove (ex-Bill Lewis III, also Chris Hughes on As the World Turns, Scott Chandler on All My Children and Aiden Jennings on Days of our Lives), and Emme Rylan (ex-Lizzie Spaulding, also Abby Newman on Young and the Restless and Lulu Spencer on General Hospital). Get some highlights from the chat from Soaps.com below.

When asked how everyone is doing, Rylan joked she is now a full-time elementary school teacher to a second and fourth grader, and today they tackled grammar. She has a newfound appreciation for teachers. Cosgrove also has a house full of kids who range in ages from eleven, fourteen, seventeen, and nineteen. Watros’ two twin eighteen-year-old daughters had just begun college when they had to move back home. She hasn’t been able to get out and do the hikes she usually likes to, so she’s been doing a lot of five-second breathing meditation to remind herself to live in the moment. Wright’s kids are adults and have moved out, but she continues to be mindful of her body and moving. She also said now that they are all stuck inside on a day to day basis she has to make herself work out in order to enjoy a cocktail in the evenings.

More: One Life to Live alum passes away

Wright recalled on her first day she was in a bikini and a fanny pack and had to strip. Rylan was originally an extra as a candy striper, and then a double for Maura (Lindsey McKeon) before she finally landed the role of Lizzie. Ramsey recalled that Sam had just been kicked out of boarding school and returned to town and had to climb the lighthouse to crash there. Watros was a fan of the show before coming on, and she remembered being conflicted that she was going to come between the iconic couple Josh (Robert Newman) and Riva (Kim Zimmer). Cosgrove joined during one of the many Josh and Reva weddings.

Wright laughed as she reflected back on the insanity on set as the actors had to deal with the Reva clone storyline as if it was something absolutely normal. Rylan always liked the on-location shoots, and remembered when the show went to Universal Studios in Florida. Her and Cosgrove’s characters were going to be filmed on a rollercoaster and she had to break the news to the director that she was pregnant. She also remembered having to film a love scene with Cosgrove on an air mattress. They were trying to disguise she was eight months pregnant, but her character was actually trying to get pregnant at the time. Watros loved filming her final scenes and Annie’s descent into darkness as a gun-toting pill popper.

A major difference all the actors remarked on was the location. Guiding Light was filmed in the heart of Manhattan, and it was very easy to leave work with one another and grab a drink at a local bar. In Los Angeles with General Hospital, everyone gets in their cars and drives home. The speed at which General Hospital is filmed is also very rapid in comparison, with them shooting multiple episodes a day. As for their characters, Rylan said Lizzie and Lulu are polar opposites, an heiress and a cop’s wife. Watros found some similarities in Annie and Nina as they both have been misunderstood, just want to be loved, and made bad choices. Ramsey went from playing a high school kid to a grown adult twenty years later, so his material is vastly different. And Wright finds Carly is feistier than Cassie.

One Life to Live and ‘Desperate...