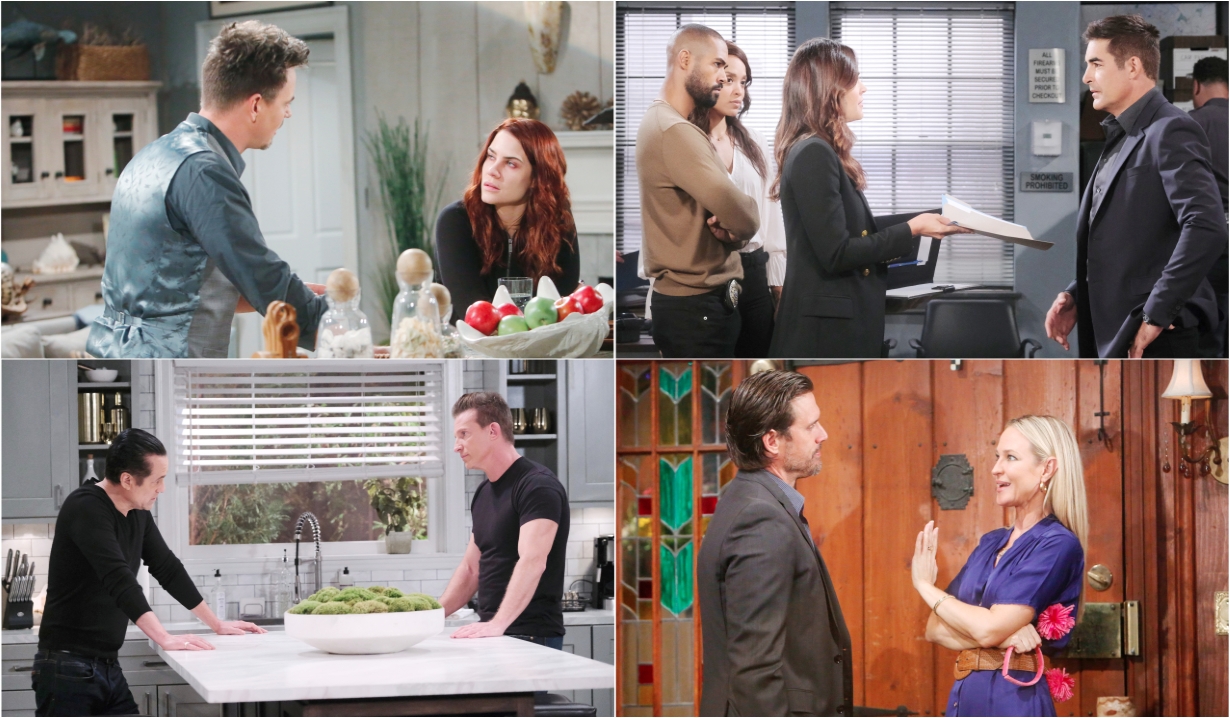 Shocks, secrets, and a shower.

Get a glimpse at what the future holds as Soaps.com brings you a few spoilers to savor for the week of April 20 – 24 for The Bold and the Beautiful, Days of our Lives, General Hospital, and The Young and the Restless, plus Days and GH spoilers from April 27 – May 1.

The uncomfortable living arrangements are getting worse for Sally thanks to Flo’s latest move. Sally soon notices that she seems to be in the losing position in this game. Quinn has already come to a hard conclusion about the situation. Wyatt is shocked when his mom sides with Katie on the Flo and Sally conundrum. Wyatt has a hard enough time working his thoughts out at the best of times, so Bill decides it’s up to him to help his son figure out his feelings. The two men show a surprising degree of sensitivity as they talk about how much they have hurt the women in their lives. The women don’t seem averse to causing some pain of their own. Sally and Penny knock out Flo during a fight and then start to freak out when Wyatt shows up. Read Soaps.com’s The Bold and the Beautiful spoilers to see whose guilt is getting the better of them.

Marlena gets some unwelcome company when Orpheus comes calling. But will Steve make the right call when he decides on what to do about his future with Kayla? His decision leaves someone surprised. Since she’s been busy deciding on whether or not her future is with Justin, has Steve made the right choice? Meanwhile, Rafe is shocked to learn that Zoey has chosen to sue for custody of David. Legal battles aren’t the only kind of trouble on the way. Over at DiMera, Chad and Abigail are taking opposite positions about the Kristen and Sarah debacle while Gabi is throwing all her energy into snagging the CEO spot at the company. It’s left to Li Shen to make the decision about Chad’s future in the family business. While Sarah remains on the run and hiding out in Paris, back in Salem, Victor might wish he ran for cover after he’s brutally attacked by Kristen. Read the Days of our Lives spoilers to discover who has a disturbing encounter.

Michael continues having a hard time tearing himself away from Wiley’s side given how close he’s coming to losing his son. Worried Willow gets some news that leaves her devastated and desperate. Meanwhile, Julian ends up on the receiving end of some attention that he definitely doesn’t want. Sonny also finds himself taken aback by the latest events and misses his meeting with Cyrus. When Corinthos pops up again, he has something important to tell Jason in secret. Jordan is getting sick of keeping secrets and contemplates quitting her job so she can move on with her life. Sam tries to heal the wounds from her most recent fight with Alexis, but things could get sticky when she has a run-in with Brando. Across Port Charles, Nina tries to get to know Nelle a little better and what Robert knows will leave some people sad. Take a look at our General Hospital spoilers to find out who is shocked by a new development.

Although he’s been distracted by a wide range of problems lately, Sharon pulls Nick back into her orbit when she needs his help. He may quickly find himself distracted again. It looks like Victor could use some help of his own now that things are starting to crumble around him. The latest secret to come out could make waves in the Newman family for a long time. As the family dynamic threatens to change forever, at least things seem to be looking up for Chloe and Kevin’s new family. Their family and friends gather together to give them a shower for their baby. Visit The Young and the Restless spoilers to learn who pushes Phyllis to act fast.