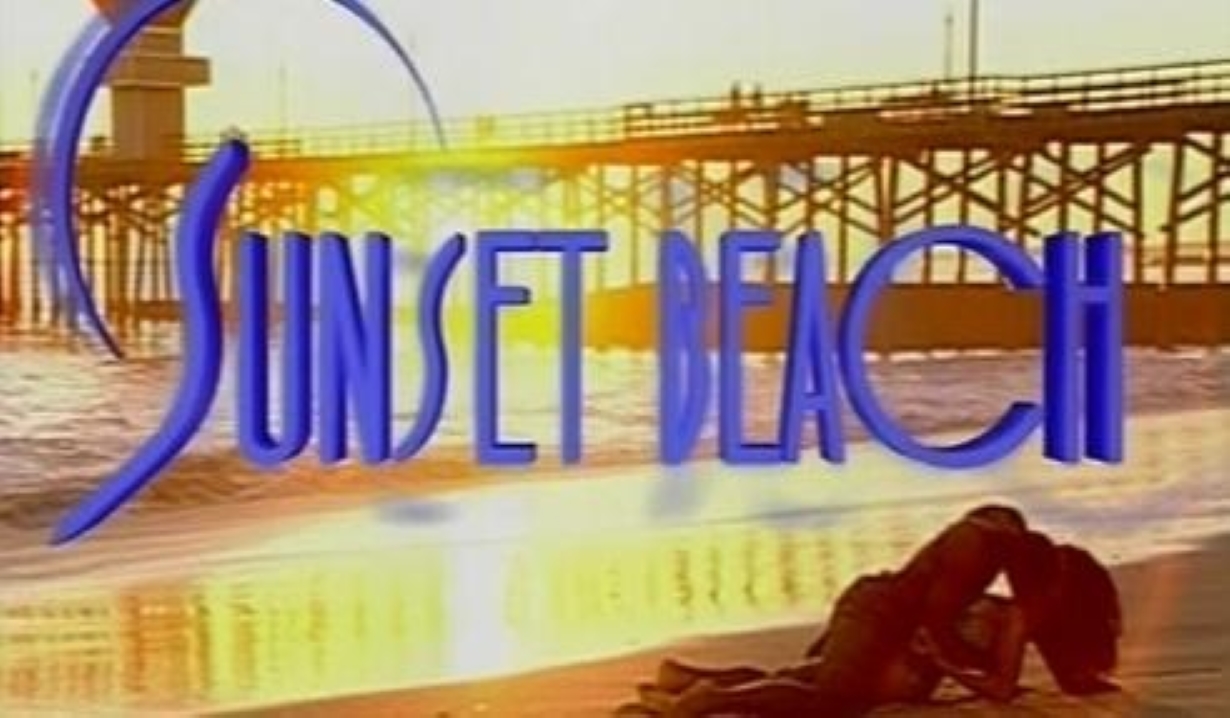 From Kansas to California in just a few clicks.

Soaps.com has turned back the clock, reviewing the first episode of 90’s soap opera Sunset Beach, starring Susan Ward (Make It or Break It) as Meg and Clive Robertson (Wicked Wicked Games) as Ben. The series opens with Meg leaving Kansas for California, spurning her cheating fiance and pursuing the object of her budding internet romance. Soaps.com had a great time recapping the pilot episode that originally aired on January 6, 1997.

Several years after the demise of producer Aaron Spelling’s glamorous primetime soap operas, Dynasty (1981 – 1989) and The Colbys (1985 – 1987), Spelling Television Productions launched their first venture into daytime. The NBC series was created by three men who would have long histories on daytime: Josh Griffith (As the World Turns, Young and Restless), Robert Guza Jr. (General Hospital), and Charles Pratt Jr. (Young and Restless). The series was also executively produced by Gary Tomlin (Another World, Days of our Lives). Premiering at the beginning of 1997, the soap aired until the end of 1999, broadcasting 755 episodes, only 12 of which have been released on DVD. You can find episodes of the show on YouTube.

Although Sunset Beach remained at the bottom of the ratings for most of its run, its playful style, with its frequent use of pop culture parody, supernatural plots, outlandish fantasy sequences, camp, and surprise guest appearances by the likes of Jerry Springer and Barbara Mandrell, helped to pave the way for Passions. For more, read a little history of Sunset Beach. 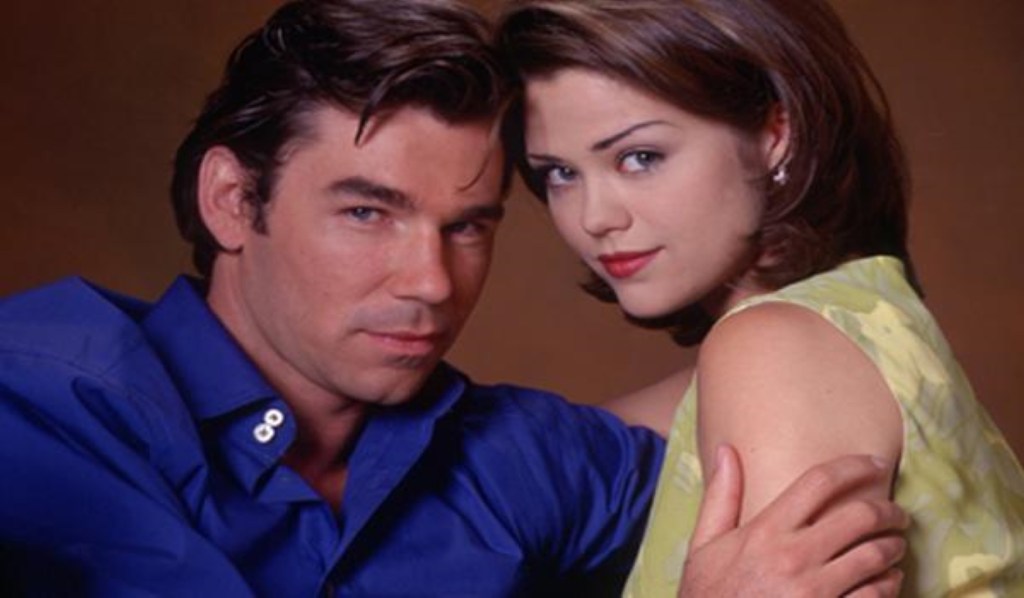 The camera glides over the ocean and across Sunset Beach before zooming in on a red truck driving along. We are introduced to Tiffany in a sleeping bag with her little dog beneath the bleachers. From the truck emerge two musclebound and scantily clad lifeguards, Michael and Casey, who smirk at her as she wakes. They decide to let this slide since she’s a kid and they can keep an eye on her.

In Ludlow Kansas, Meg stands on her porch and stares across the fields. She gets a message over the internet from ‘SB’ (actually Ben in Sunset Beach). He tells her how much their cyberchats have meant to him. She wishes they didn’t have to end. He doubts Tim would appreciate that. Her mom bustles in and reminds her it’s her wedding day. She gives her a necklace, but her daughter can’t stop thinking about all the things she’ll never do now that she’s going to have a predictable married life. Her mom assures her she’ll be satisfied and bustles off. Later, at the church, dressed in her veil, Meg goes to see Tim and catches him making out with another woman, promising to see her when he gets back from his honeymoon. Moments later, Tim is waiting at the door as Meg drives off in his car, chucking the bouquet into the fields.

On a jet, Meg interrupts her seatmate’s drinking to tell him about the “cyber thing” she’s been involved with. He says romance is for fools. She tells him her life story. When she gets on her laptop, she sends ‘SB’ a message to say her wedding is on hold and she might be on the way to Sunset Beach.

Back on the beach, Ben jogs until Annie joins him in no more than a police shirt to brag all the hard breathing she did last night. He asks about her hook-up and she wonders if he’s jealous. She can’t understand why he’s acting like a monk. Ben thinks she’s desperate for attention. When he goes inside, he gets the message from Meg and tells her to stay in Kansas. It’s too late.

Once Meg arrives in Sunset Beach, she walks in the sand and gets her feet wet in the ocean. Cops, Ricardo and Paula, walk the beat and talk about his promotion until she jokingly proposes. She gooses him and they go patrolling.

At Java Web, Mark catches Tiffany trying to lift one of Elaine’s tips. He warns that the last person to do that wound up in the chowder. He worries about her sleeping on the beach. “Earth to Mark: I don’t need to be saved,” she says. She grabs a tip left on the counter and locks eyes with Meg as she walks in. Tiff walks out and Elaine demands that Michael arrest Meg for stealing the tip. They work that confusion out. Elaine welcomes her to Sunset Beach and tells her it’s the land that romance built. She regales Meg with the tale of Armando Deschanel, a European aristocrat who settled in Sunset Beach after fleeing Europe for killing someone in a duel. On the beach, he met the lady in black and legend has it her ghost still roves the place. Legend also has it that whoever you meet on the far side of the pier as the sun sets is who you are destined to be with.

Paula and Ricardo arrive at the police department. She heads to the locker room and brags to the other cops. Ricardo bursts in to say he’s made detective.

Mark takes Tiff to the abandoned Surfside Day Care center and announces it’s her new home. She demands to know why he’s always doing things for her. He explains he was a runaway too and wants to help her, just like Ben helped him.

Back at Annie’s beach house, she continues to run around in no more than a shirt until her father, Del, angrily storms in. He declares it looks like she’s attending the fall of civilization, not law school. She’s been on an endless vacation since she got to California. “The party is over!” he decrees. When a half-naked cop hobbles down the stairs in cuffs, her dad decides to leave. Aunt Bette shows up and starts bragging about the ‘mouthful’ a tennis player gave her. Annie admits she’s terrified her father will cut her off. Bette tells her niece to beat her father at his own game.

On her patio, Olivia tries torturing a fly with the light reflected from her bulbous wedding ring. Her lawyer husband Gregory smashes the fly and she ruminates on the cruelty of nature before laughing.

Casey wanders into Java Web to get takeout spaghetti when he bumps into Paula. She tells him about Ricardo’s promotion and worries about what this might mean for their relationship.

Meg goes down to the beach as the sun starts to drop. Ben wanders by into the sunset. As she stands by the pier, she remembers what Elaine told her about destiny. He looks back at her and smiles. As she is about to go to him, Tiff steals her bag and bikes off. Meg tears after her but gets her dress snagged and falls off the pier into the water.

More: A look back on Days kidnappings

Sunset Beach delivers a hit of late 90s nostalgia and offers a fascinating glimpse not only of that era but of many soap opera stars when they were starting out. It’s over the top, silly, and a lot of fun to look at. 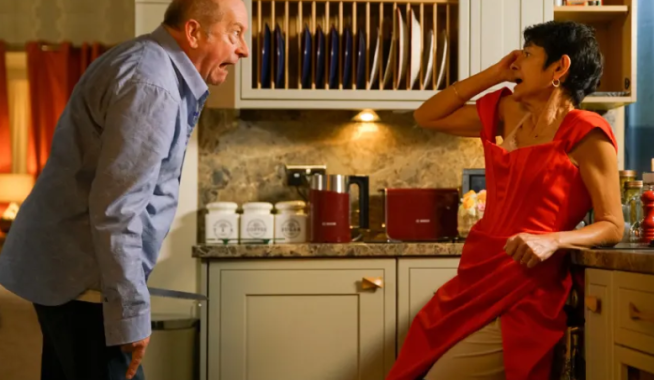 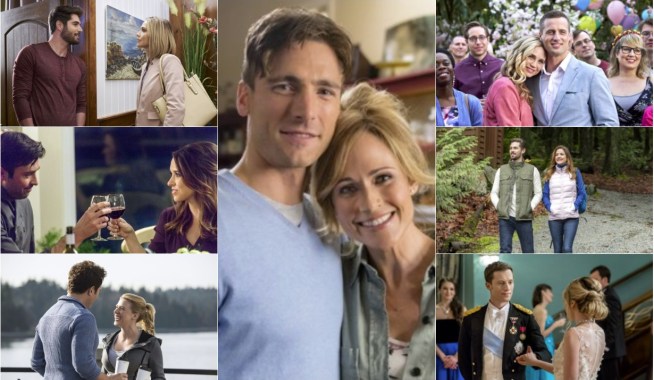