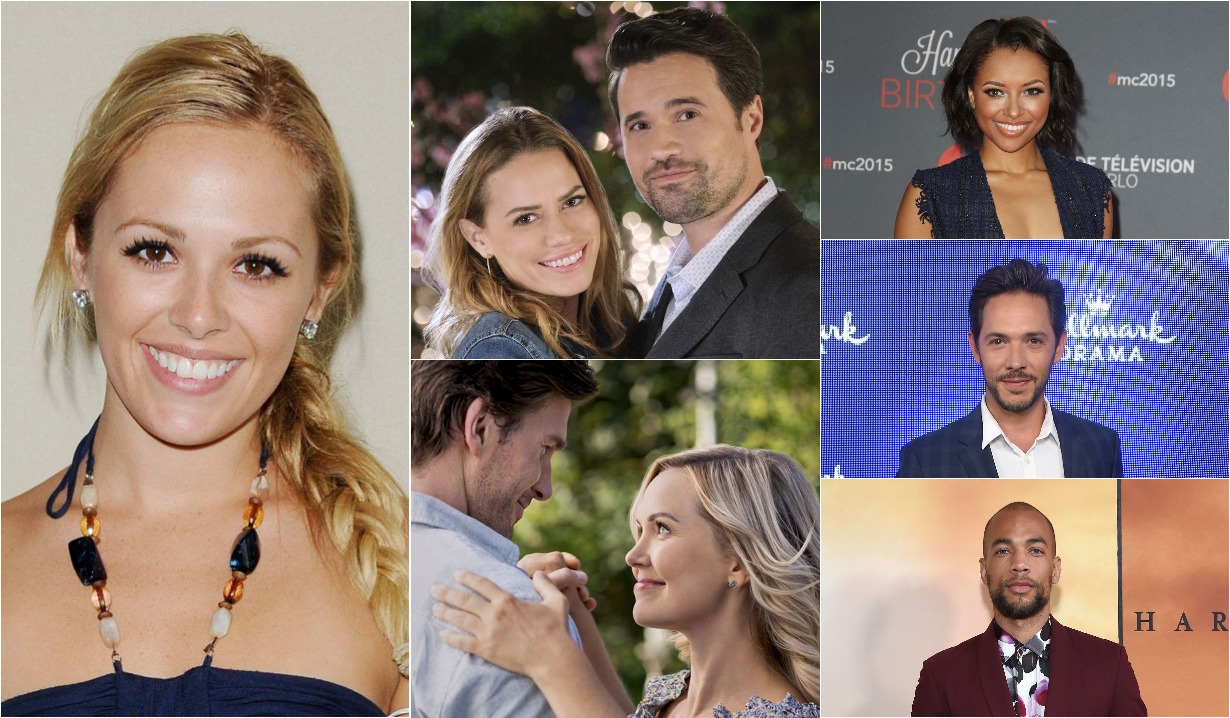 Love springs up around every corner as the seasons change.

Last month, Soaps.com brought our readers details on the Hallmark Channel’s Countdown to Valentine’s Day premieres, which featured soap opera alums from Guiding Light and General Hospital. Next up is the network’s Spring Fever event with four new premieres running from Saturday March 28 to Saturday April 18. Once again, soap alums from All My Children, Another World, Days of our Lives and Guiding Light fill out the cast of the latest romance movies, so tune in on Saturday March 21 at 11:00 PM for the Spring Fever Preview Special, hosted by soap alum Bethany Joy Lenz and Michael Rady, and take note of the premieres to follow… Titles and air times may be subject to change.

Guiding Light alum Bethany Joy Lenz (Michelle Bauer Santos) will star as Vanessa Mills opposite Brett Dalton as Martin Clayborne in Just My Type. Vanessa, a pop culture writer and aspiring novelist, heads to a quiet bed and breakfast in Washington in order to escape run-ins with her ex. When she meets Martin, a reclusive author, Vanessa’s determined to land an exclusive interview to help with a big promotion. They grow close during their time together but it’s a mysterious gift from Martin that sends Vanessa on a path of true happiness. Tune in Saturday March 28 at 9:00 PM.

All My Children alum Natalie Hall (Colby Chandler) appears as Cleo alongside Michael Rady as Gabe in You’re Bacon Me Crazy. Based off the young adult March 2017 book by Suzanne Nelson, the story follows an aspiring Portland chef named Cleo who enters a food truck competition. However, the man she’s up against, Gabe, could very well be the biggest prize of all. Another World alum Barbara Tyson (Dawn Rollo) also appears as Mary. The movie premieres Saturday April 4 at 9:00 PM.

Days of our Lives alum Kendrick Sampson (Jay Jordan) and The Vampire Diaries actress Kat Graham star as Rob and Lauren in Fashionably Yours. Lauren is passed up for a promotion after working for a top fashion magazine for three years and heads home to Seattle, even though she’s not keen on the city. However, a moving company owner named Rob decides to show Lauren that there are many things to love about Seattle – one being him. Tune in Saturday April 11 at 9:00 PM.

Emilie Ullerup (Chesapeake Shores) and Christopher Russell team up as Katie and Will in Nature Of Love. Katie sets out on a trip to a glamping resort to write a feature for a magazine. With the help of a rugged outdoorsman and nature guide named Will, Katie is forced to face her fears while taking part in the camp’s activities. The movie airs Saturday April 18 at 9:00 PM.

A rainy morning in Vancouver, painting on the masks and slowly slipping into character for a new movie. This is my makeup artist Jo ✨

<p>Martin tries to remove a hook from Vanessa’s jacket in Just My Type. Vanessa is a writer and is trying to score an interview with Martin, who’s a mystery author. </p>

<p>Vanessa and Brett stand by a white fence in Just My Type. The couple gives a high-five for a job well done. </p>

<p>All My Children alum Natalie Hall plays Cleo with Michael Rady as Gabe in You’re Bacon Me Crazy. Both spend some time looking at flowers.</p>

<p>Cleo and Gabe meet up at a vegetable stand. Both are all smiles while chatting it up. </p>

<p>Chloe and Gabe await the final word to see which one won the food truck competition. Each has their own reasons for wanting to come out on top. </p>

<p>Rob and Lauren meet up after she moves to Seattle. Rob promises to show her how great the city is. </p>

<p>Lauren appears in awe of her surroundings. Rob knew she’d warm up to her new home. </p>

<p>Emilie Ullerup and Christopher Russell star as Katie and Will in Nature of Love. Katie heads to a glamping resort. Will’s there to help her adjust to outdoor activities. </p>

<p>Fishing is next on the list for Katie. Will and Katie share a glass of bubbly while holding the fishing poles. </p>

<p>Katie and Will take some time out for dancing on Nature Of Love. The couple shares a laugh in the great outdoors. </p>