Soaps Spoiler Digest Has Characters Tortured, Terrified, and Taking Off 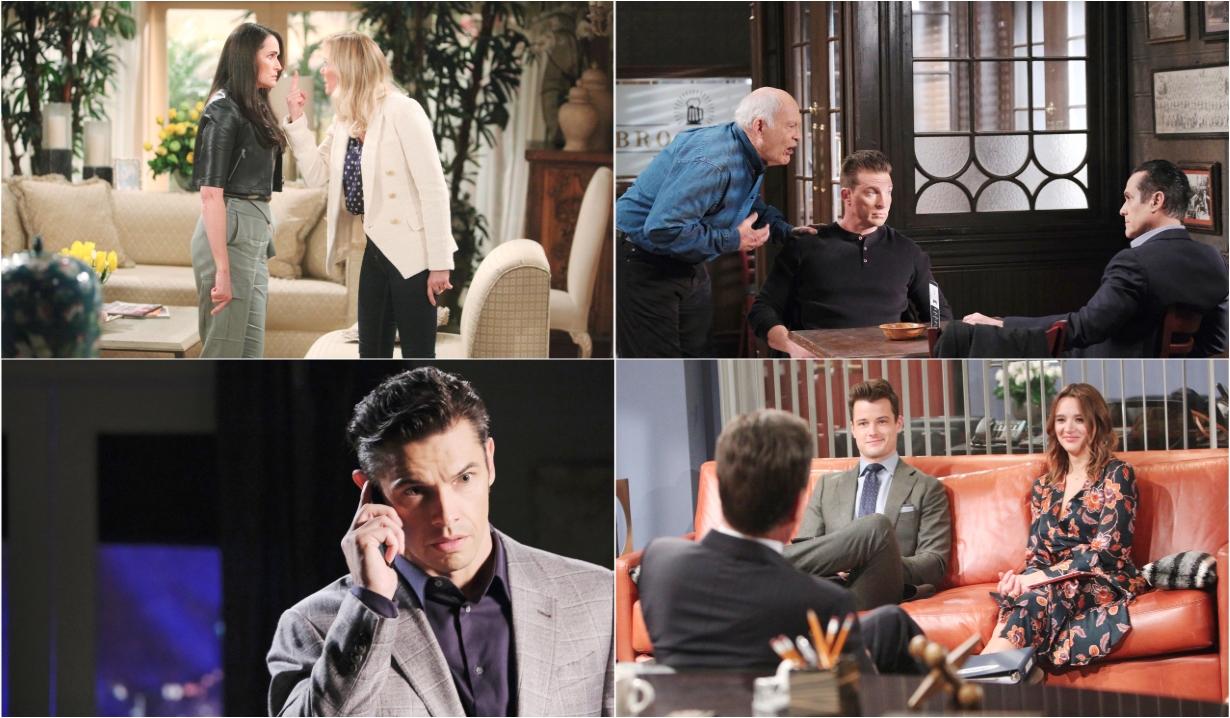 Off-kilter and over the edge.

Soaps.com has the latest tantalizing spoilers for the week of January 27 – 31 for The Bold and the Beautiful, Days of our Lives, General Hospital, and The Young and the Restless, plus Days and GH spoilers from February 3 – 7.

Quinn has been on edge for a while and the news that Eric gives her might be enough to push her off. When he tells her about where Shauna is sleeping now, this only excites her desire to take down Brooke. She and the blonde ratchet up their war over the Forrester family. But will Quinn go too far? Considering that Thomas is eager to partner with her, it looks like the answer is yes. Meanwhile, Sally just wants to move on with her life. Katie assures a moping Wyatt that Sally will survive their latest breakup. Wyatt seems like he needs more reassurance than that and turns to Liam to get his take on leaving the redhead for Flo. Read the Soaps.com’s The Bold and the Beautiful spoilers to see who else Thomas interferes with.

As Will and Ciara contemplate coming out with the truth, Kristen is doing what she can to manipulate it in her favor. After she causes problems for Eric and Nicole, he runs off to get some comfort from someone else. Across Salem, Brady isn’t feeling comforted when Xander shows up with a desperate request. Meanwhile, John and “Steve’s” search for Stefano leads to them stumbling onto Anna and Tony. Everyone is shocked by the way that “Steve” treats her. If that wasn’t enough to make people realize something is seriously askew, Kate’s confrontation with Gina might be. As Kate is arguing with the princess about her plans, Shawn shocks Rafe with his theory about why his mother isn’t acting like herself anymore. And “Steve” shocks Marlena when he tells her that John is dead. Read the Days of our Lives spoilers to discover who makes a confession.

As the mob war continues to percolate around Port Charles, Jordan increasingly fears that things will get a lot uglier than they already are. Michael is on the defensive and doing what he can to protect Sasha. She’s feeling terrified so he decides to get her out of town while he can. Sonny is doing all he can to keep his father calm, but it might be too late for someone in his life. As Sonny heads to the ER, Carly starts to panic, and Jax is starting to wonder how long it will be until someone breaks down. Meanwhile, Finn tears into Nikolas and the Cassadine goes off to check on Laura. As the doctor gets increasingly distraught and shoots out ultimatums, Nelle gets desperate enough to try and get Brook Lynn into her corner. This will likely cause even more friction for Ned and Tracy. Take a look at our General Hospital spoilers to find out who else is feeling protective.

Kyle and Summer try to sort out their feelings for each other after they share a kiss. He is quickly running home to confess this to Lola and even to his father. Meanwhile, Amanda is eager not to have things to confess about and tries to put some distance between herself and Billy. Overreacting to this, Billy decides to stop living with Victoria and heads out on his own. This leaves her unsure of what to do but Victor gives her something useful. Across Genoa City, Devon weighs his options as he makes a difficult choice. Nick has already made a hard choice and is trying to stick by it, but it’s complicated when he has to have painful conversations with Chelsea. And Phyllis finds herself getting frustrated and being forced to decide on what her priorities should be. Visit The Young and the Restless spoilers to learn who isn’t coping well with reality.