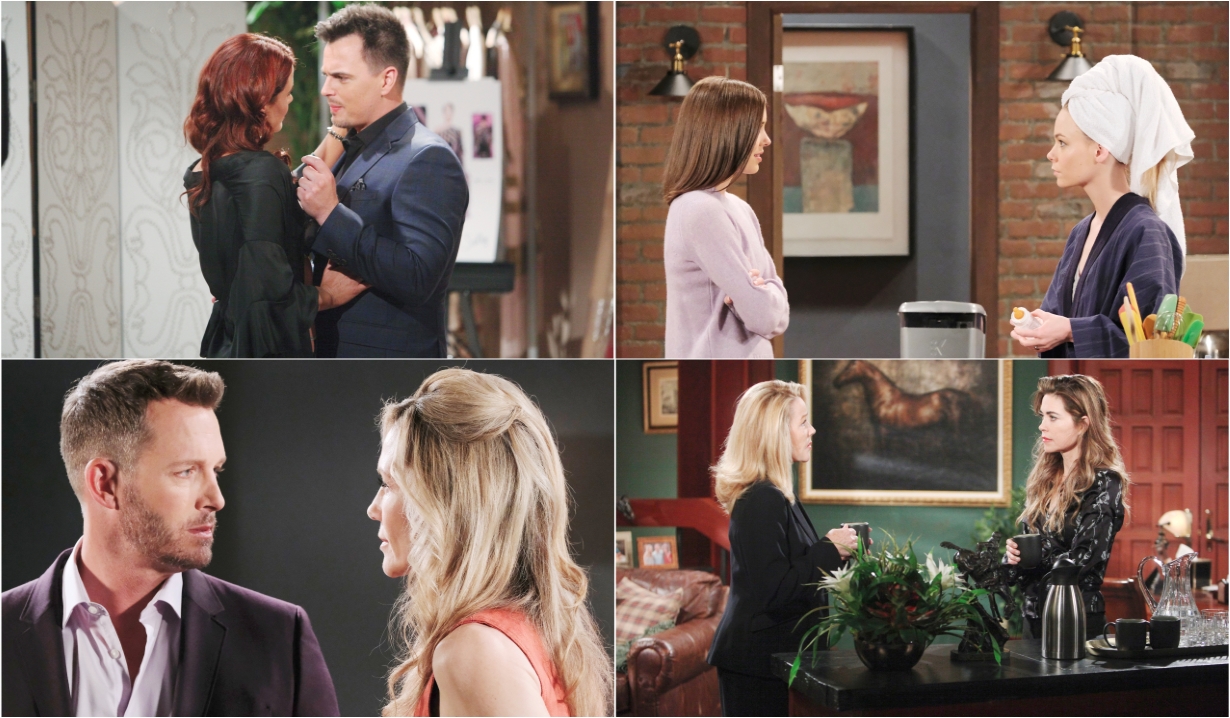 The shaken and the shocked.

Soaps.com has the latest tantalizing spoilers for the week of January 20 – 24. for The Bold and the Beautiful, Days of our Lives, General Hospital, and The Young and the Restless, plus Days and GH spoilers from January 27 – 31.

Wyatt’s break-up with Sally is a lot harder than he was expecting it to be. She heads off to Flo’s place to explain a few things about Wyatt. Meanwhile, Thomas is ecstatic that Hope has broken up with Liam and he gets to comfort her. He still manages to find the time to meddle in Steffy’s plan to tell Liam the truth. As they make a deal for her silence, Katie tries to reassure Wyatt that Sally will survive her latest loss. Things are looking grimmer for Brooke. Quinn is on the warpath, determined to get back at the blonde for interfering in her marriage. That only gets worse when Eric tells her Shauna’s news. Soon, Quinn and Brooke are both upping the ante as they fight for their rightful place in the Forrester family. Read Soaps.com’s The Bold and the Beautiful spoilers to see who decides to put themselves first.

The last day of Adrienne’s life in Salem is finally explained as Justin and Sonny look back at the day they lost her. With Xander on hand, Sarah manages to deliver the baby. But she is still left in a precarious situation with Adrienne. That’s when Will finds her. Soon after, he’s making a confession to JJ about what happened while Xander is confiding in Victor and they’re making a difficult choice. Brady is making some difficult choices of his own, like bringing Kristen to John and Marlena’s for Mother’s Day. Pretty soon, she’s giving birth too, but it isn’t going as smoothly as she’d hoped. Brady is shocked when he learns what’s really been happening. Read the Days of our Lives spoilers to discover who tells JJ that Haley is dead.

Jordan is feeling pessimistic about what’s ahead in Port Charles. At least Gladys is impressed by the way that things have been going. Sonny does what he can to comfort his father, but he soon winds up in the ER. Meanwhile, Laura has a new plan that she’s eager to get to work on. Will Nikolas gum it up when he pays her a visit? As the Cassadine war continues to churn, Martin is sure to stay close to Valentin to get him what he needs. Life may be getting more frustrating for Willow but it’s getting disturbing for Nelle. Getting desperate, she reaches out to Brook Lynn for help. And Michael spends his time helping people. He finds Joss on the docks and later finds himself defending Sasha again, but that’s not enough to stop her from being shaken. Take a look at our General Hospital spoilers to find out who has a confrontation with Nikolas.

Some people are surprised by the announcement that Nikki makes. As she and Victor argue about it, Nick is doing his best to remain firm in his commitment. This leaves Adam free to plot his next move with Chance. Across Genoa City, Lauren and Michael are startled by what Fenmore tells them. But they may not be as startled as Billy is when Amanda tries to set some clear boundaries between them. It looks like she needs to because Victoria is having a hard time getting through to him. They soon realize there might not be a way forward, but he has one more trick up his sleeve. Meanwhile, Kyle clobbers Billy and then hits the road with Summer. Pretty soon, they are locking lips and he returns with a confession to make to Jack. Visit The Young and the Restless spoilers to learn who experiences a setback.

Caught in the Act & Slapped in Soaps...