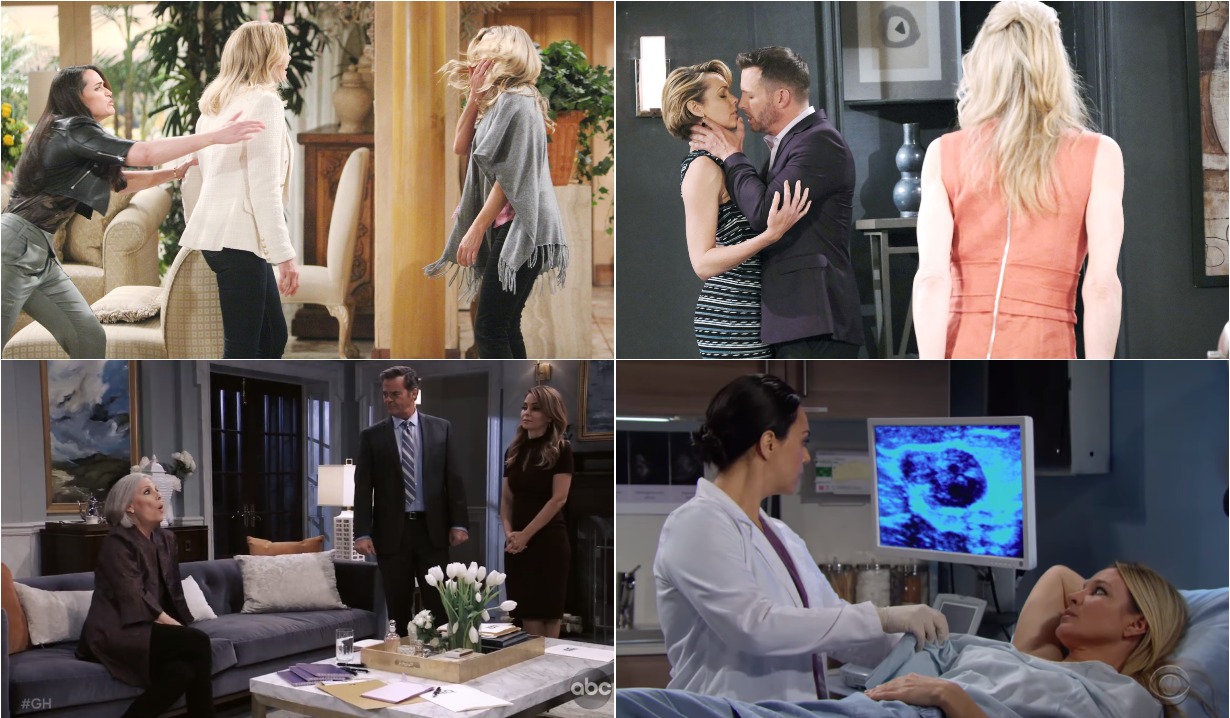 War is declared, a new plot, a road trip and interesting news.

Soaps.com has January 13 – 17 highlights from Bold and the Beautiful, Days of our Lives, General Hospital and Young and the Restless, plus a few teasers for each soap opera…

First on The Bold and the Beautiful, Wyatt and Flo professed their love to one another, while Sally began to experience uncontrollable shakes in her hands. Brooke learned Hope had dumped Liam after finding him and Steffy kissing, and later Ridge admitted his own indiscretions to Brooke with Shauna. Convinced Quinn was plotting with Shauna, she declared war and slapped Shauna, only to have Quinn retaliate by hitting Brooke. Coming up: An even bigger showdown occurs between Brooke and Quinn.

On Days of our Lives, Victor confessed to Ciara that Will did not kill Adrienne and that he and Xander framed him to protect her real killer. Eli proposed to Gabi, who accepted, while JJ worked to disable the app on Gabi’s phone controlling Julie’s pacemaker. Stefano and Gina planned to break up John and Marlena by having them both “die.” And Eric and Sarah returned home with their daughter Mickey, who wasn’t responding to the chemotherapy. Coming up: The circumstances of Adrienne’s death are revealed.

Over on General Hospital, at Shiloh’s memorial, a paroled Nelle revealed that she and the dead cult leader were married and she sought the ELQ shares Oscar left Shiloh. Neil told Alexis that he may lose his medical license because he did not wait the required two years between treating and dating her. Spinelli surprised Maxie with a visit to Port Charles with their daughter Georgie and teased it may be permanent. And Sonny was suspicious when Marcus Taggert returned to town. Coming up: Nikolas reveals he’s alive to his son Spencer.

Finally, on The Young and the Restless, Faith snooped into her mother’s belongings and learned she had an appointment at a breast cancer center. Later Sharon admitted to Nick and her children that she had stage 2 breast cancer and both surgery and chemotherapy were needed. Adam informed Victor he was going to revive Dark Horse in order to leave a legacy to Connor. And Billy confessed to Victoria he’s been meeting with Amanda to talk about his problems, leaving her furious that he couldn’t turn to her. Coming up: Kyle decks Theo, and later kisses Summer.

Catch Up With This Week in Soaps...