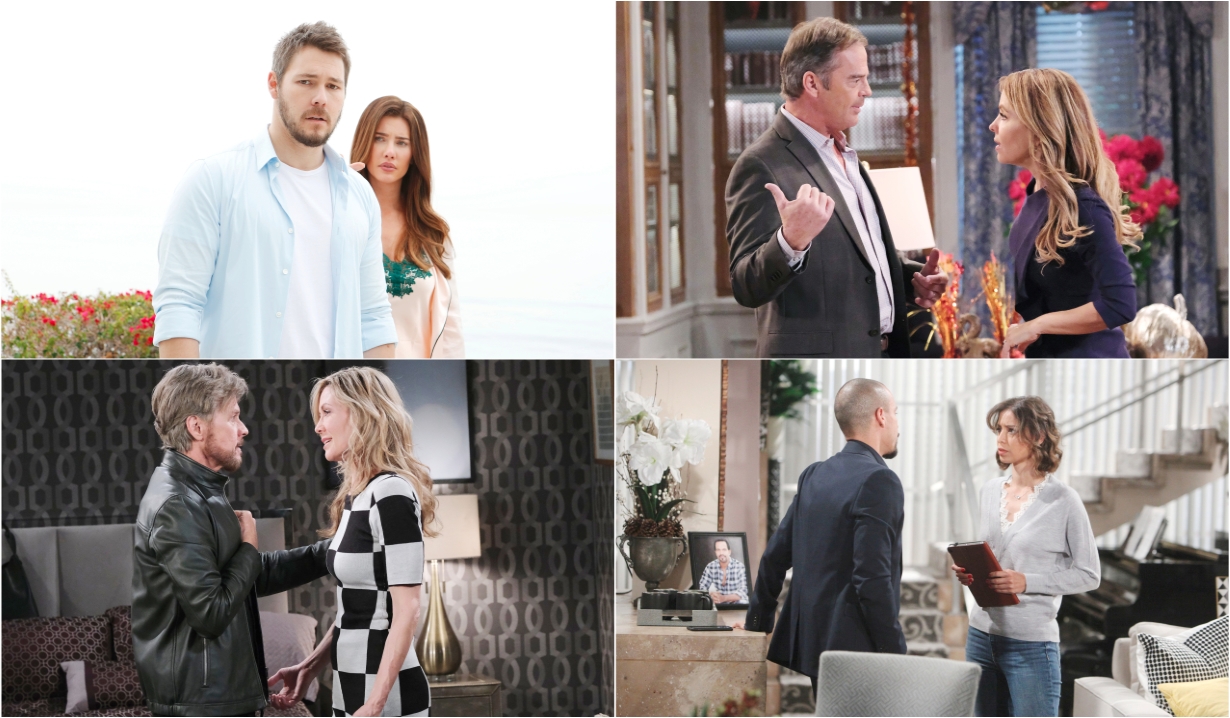 Get a taste of what’s in store as Soaps.com brings you the latest spoilers for the week of January 13 – 17. for The Bold and the Beautiful, Days of our Lives, General Hospital, and The Young and the Restless, plus Days and GH spoilers from January 20 – 24.

Brooke’s week gets off to soggy start as a teary-eyed Hope tells her mom what she saw transpire between Liam and Steffy. Even Steffy is feeling bad about this, but will she feel even worse after Liam makes a confession to her? Either way, she may have bigger things to worry about once she sees Sally’s designs for the fashion competition. Meanwhile, Brooke finally loses it after learning that Ridge and Shauna have been making out. She is soon fighting with Quinn and vowing revenge. Eric is stuck in the middle of this, but Shauna is managing to stay distracted thanks to Flo unloading her problems on her. At her mother’s urging, Flo reconnects with Wyatt. However, he has other things on his mind after he attends the family meeting for Katie, who makes a request that no one was expecting. Read the Soaps.com’s The Bold and the Beautiful spoilers to see who turns down a beautiful woman.

Clyde tries talking Ben into breaking out of the joint with him. That may be a lot less painful than Will and Sonny signing their marriage away when the Kiriakis drops by the prison with some divorce papers. Back in Salem, Kristen is shocked to discover that “Steve” isn’t really Steve after all. He’s got more to worry about than her though. He and Gina scheme up a new plan to ruin John and Marlena’s relationship. He manages to convince John to leave town with him so they can hunt down Stefano. Meanwhile, Kayla and Rafe discuss how weird Hope has been acting lately. Across town, Ciara nearly loses it after she discovers the secret that Victor and Xander have been keeping. And Gabi is thrown for a loop when Eli pops the question to her. Will the daze keep her off balance when JJ pays her a visit that could have a deadly end? Read the Days of our Lives spoilers to discover who Chad is suspicious of.

Jason’s paranoia continues to run high. Having Spinelli back might not be helping things much. While the Jackal is busy with Maxie, Tracy gives Ned a little reminder about what’s actually important in life. She seems to have really turned over a new leaf because she’s also trying to make peace with Olivia. However, Tracy is feeling a great deal less forgiving when it comes to Michael. Across Port Charles, Chase has to break up a fight. He gives Jordan an update on the Corinthos case. Sonny could be making that complicated. He plans to leave for a road trip and Gladys gives him all the support she can. He may need it since the mob boss is feeling more emotionally frayed by the moment. Meanwhile, Julian pays Brad an unwelcome visit and his life rapidly takes a turn for the worse. Take a look at our General Hospital spoilers to find out who wants to know more.

More: Justin Hartley’s This Is Us return date

Lily comes back to Genoa City to visit, but Devon does not have a smile on his face. He admits to Elena that he’s obsessed by Amanda. Meanwhile, Victoria pushes Billy to admit to what he’s been doing in bars after she finds some receipts. She gives him an ultimatum and he turns to Lily for advice about what to do. It looks like Sharon could use some advice as well. She tells Rey her latest problems, but it’s Nick who is giving her support. He still finds the time to interrogate Chance. Phyllis may have an easier time getting information out of him thanks to her charms. And there’s not much charming about Victor as he lays down the law with Adam. Visit The Young and the Restless spoilers to learn who has doubts about Chelsea’s motives.