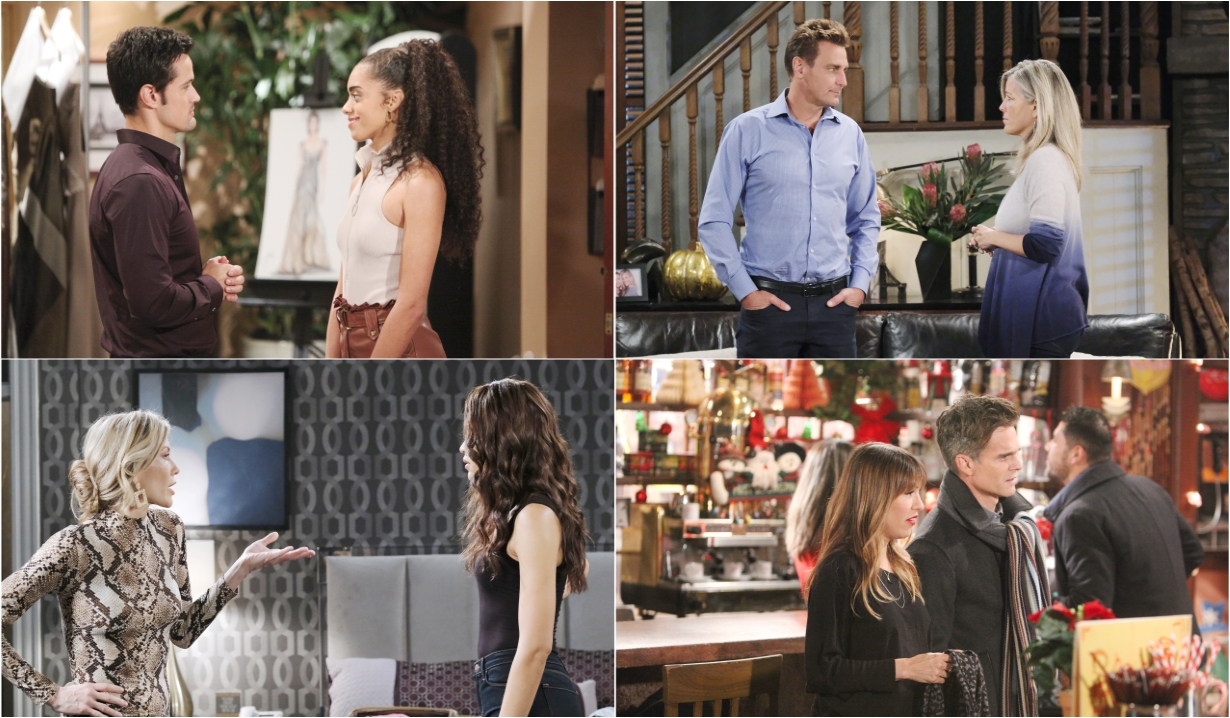 Get a hint at what’s ahead as Soaps.com brings you the latest spoilers for the week of December 30 – January 3 for The Bold and the Beautiful, Days of our Lives, General Hospital, and The Young and the Restless, plus Days and GH spoilers from January 6 – 10.

Hope is already on edge thanks to Thomas’ off-kilter behavior, but he only starts to ratchet up the worries with his latest surprise. Thomas takes Zoe out for a date and has no trouble romancing her, a fact that fills Liam with horror. He can hardly wrap his head around how well Thomas has wrapped Zoe around his finger. Meanwhile, a man at Forrester puts a spring in Steffy’s step when he asks her out for a date. And could things still change for Brooke and Ridge as they take yet another walk down memory lane to remember the good parts from their past? Read Soaps.com’s The Bold and the Beautiful spoilers to see who makes love.

Exhausted by his antics, Kate threatens to expose Stefano, but this threat may be quite meaningless. John, Marlena, Kayla, and Justin are soon shocked to see Steve back in Salem and hardly acting normal. Marlena also decides that this is the prime time to confront “Hope” about her feelings for John. The shrink is hardly the only person feeling uneasy in her love life. Brady and Nicole are locking lips, only to be spotted by Kristen. Shedding her nun’s habit seems to result in the DiMera returning to her old habits, including things like violently lashing out. As Kristen is attacking Nicole, Eli gets a clue about who has been vandalizing Gabi Chic. And Xander and Victor manage to figure out that Ciara has outwitted them. Read the Days of our Lives spoilers to discover who lashes out at Rafe.

Sonny’s latest actions lead to those around him asking some serious questions about what he’s thinking. Jason questions his boss’ motives and Carly runs off to open up to Jax. Soon, she’s making demands and Sonny is feeling betrayed on all sides. Lives get worse when Diane arrives with some bad news. Across Port Charles, Jax isn’t sure what to do about the situation he’s in. Nina is aggressively prompted to make a hard choice that will affect her future. And, worried about what is on the way, Laura tries to talk a reluctant Charlotte into something. Take a look at our General Hospital spoilers to find out who accepts their fate.

More: Behind the scenes of Ryan Paevey’s Matching Hearts

Adam continues to test the limits of everyone around him, but he may have gone too far this time. As he crosses the line, Nick decides it’s time to flip things around on his brother. Will this be connected to the shocking discovery that Sharon makes? Chance finds himself on the receiving end of some intimate questions and a lecture from Jill. Phyllis is making his life more complicated by flirting with him. Meanwhile, Victoria takes a break from her endless worries about Billy to celebrate the New Year with Nikki. But Nikki isn’t all laughs. She issues a serious warning to someone. And Kevin and Chloe share some big news with their friends and family. Visit The Young and the Restless spoilers to learn who gets an unexpected delivery.