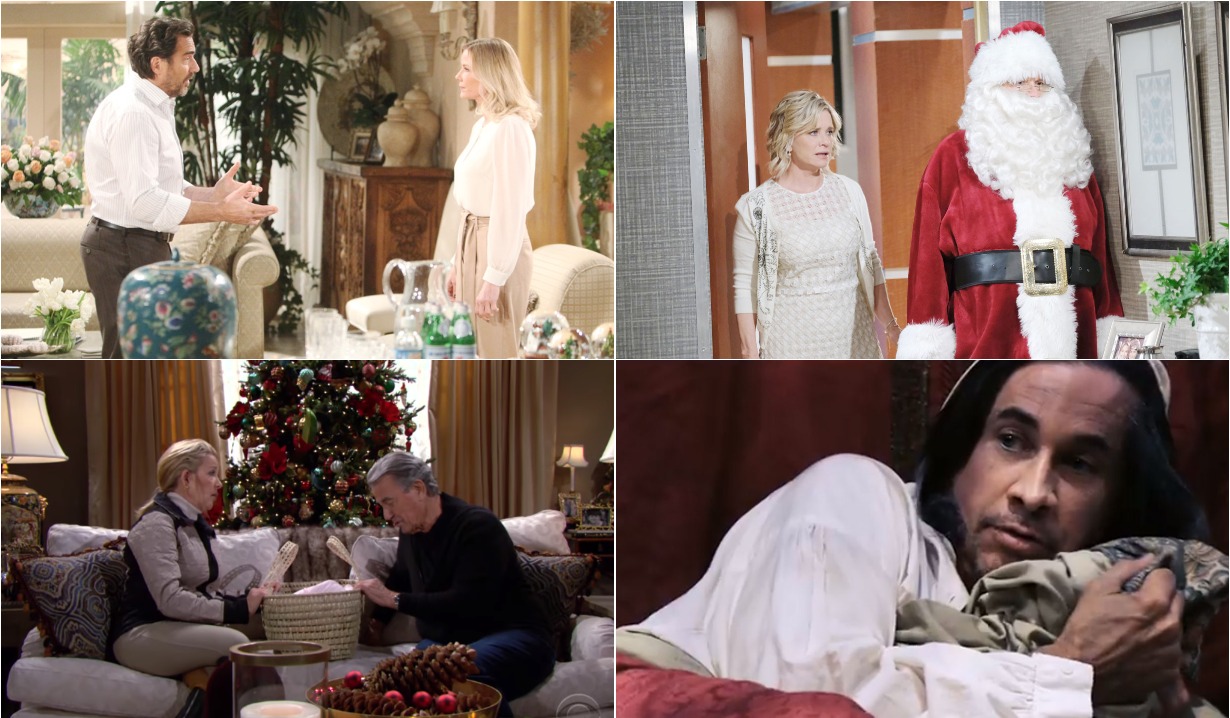 A family meeting, romance, a difference of opinion and surprises.

Soaps.com has a rundown of episode highlights for Bold and the Beautiful, Days of our Lives, General Hospital and Young and the Restless for December 23 – 27, plus a few teasers for what’s coming up…

First on The Bold and the Beautiful, Thomas was thrilled to be working with Hope on her line, while Steffy remained concerned that Thomas was still obsessing over Hope. Brooke learned Steffy hired Zoe to keep an eye on Thomas for her and Liam. And Thomas continued to try and convince everyone that he had moved on with Zoe, but even Zoe wasn’t sure if he was using her. Coming up: Shauna learns Thomas’ secret.

On Days of our Lives, JJ confessed his addiction problems to his family. Both Eve and Hattie were released from prison, and Eve crashed the Horton tree decorating ceremony to reveal she was leaving Salem. Steve, aka Stefano, disguised himself as Santa to stalk Marlena at the hospital Christmas celebration and slipped a gift into her purse. And Kristen and Lani made their way back to Salem where a furious Lani vandalized Gabi’s storefront window. Coming up: Steve reveals himself on New Year’s.

Over on General Hospital, residents of Port Charles reenacted A Christmas Carol as Monica read the story to the children spending the holiday at General Hospital. Franco returned home for the holidays with his memories intact, and Sonny invited his father’s cousin Gladys to spend the holidays with his family. Tracy Quartermaine returned to surprise her family, only to be shocked by a completely redecorated Quartermaine mansion. And Sam was paroled on Christmas Eve. Coming up: Sonny demands to know what Carly is keeping from him.

Finally, on The Young and the Restless, Summer accused Theo of being obsessed with Kyle and wanting his life, including Lola. Billy began gambling again and spending more time with Amanda. Faith returned home from boarding school for the holidays, and Fenn was out of rehab and surprised Lauren and Michael at the Abbot family Christmas. Adam professed his love to Chelsea and believed she still had feelings for him. Meanwhile, Phyllis confessed to Nick that Adam asked her to seduce Nick. Coming up: Nick realizes he’s losing Chelsea.

One Life to Live Alum Pamela...

Christopher Meloni, 60, Lounges Shirtless In A Speedo As He Reveals How Pleased He Is To Be A ‘Zaddy’ Now

IATSE Adopts New Equity Statement; Will Conduct “Census” Next Year To Measure Diversity Among Its 150,000 Members

Physical Renewed for Season 2 at Apple