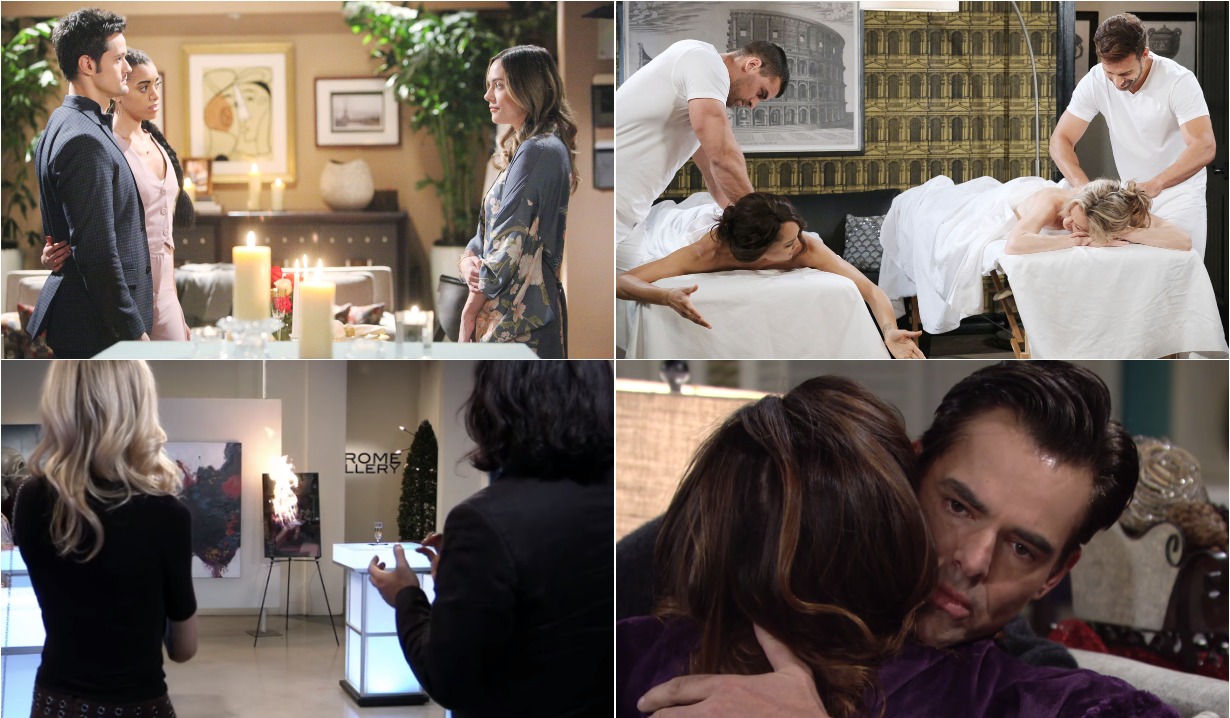 A significant change, a difficult sacrifice, a surprise and a secret.

Soaps.com has the latest Bold and the Beautiful, Days of our Lives, General Hospital and Young and the Restless storyline highlights from last week’s December 16 – 20 episodes, as well as a few teasers for what’s coming up this holiday season…

First on The Bold and the Beautiful, Liam and Steffy questioned Zoe about Thomas, and she admitted she likes Thomas, but he still seems fixated on Hope. Thomas meanwhile tried to convince Hope that he had moved on and was dating Zoe, who Steffy agreed to hire back at Forrester because Liam felt they could use her to expose Thomas. After catching Thomas and Zoe kissing, Hope later agreed to work with Thomas on her line. Coming up: Ridge offers Brooke another chance.

On Days of our Lives, Will asked Sonny for a divorce. Stefano framed Rolf for pushing Jennifer off the balcony to keep Gina from being exposed. Rafe searched for Rolf and discovered Stefano’s lair, while Stefano hid out in Kate’s room above the Brady Pub. Gina made advances on John, but he rejected her. Lani and Kristen plotted to return to Salem and regain what they lost and set a trap for Gabi. And JJ struggled to get sober before the holidays. Coming up: Kayla spots Steve at the hospital Christmas party.

Over on General Hospital, at the auction for Helena’s portrait, everyone was stunned when it burst into flames. Later Nikolas revealed himself to Ava, and the blonde told him she had the codicil. Anna discovered a connection between her son Peter and the gunman who tried to kill Andre and Franco. Franco woke up from the memory mapping procedure as himself but learned Drew had been declared dead. And after an accident involving Charlotte, Valentin vowed to Lulu that he would gain full custody of their daughter. Coming up: A very special Christmas Carol episode of General Hospital.

Finally, on The Young and the Restless, Amanda revealed she was an orphan who grew up in foster homes, while Devon learned Amanda and her former fiancé have restraining orders against one another. Adam asked Phyllis to seduce Nick, but a disgusted Phyllis refused and warned him that he’d made a huge mistake. Sharon warned Adam that Connor was getting mixed messages about Adam and Chelsea’s relationship. And when Theo missed a big appointment with a client, he accused Kyle of sabotaging his first major deal. Coming up: Nikki discovers an abandoned newborn on Christmas.

‘The Green Knight’ Review: Dev Patel is a Fellowship of One in David Lowery’s Somberly Majestic Medieval Death Trip